The Quinnipiac Chronicle • May 2, 2017 • https://quchronicle.com/57989/news/social-media-societys-compulsive-addiction/ 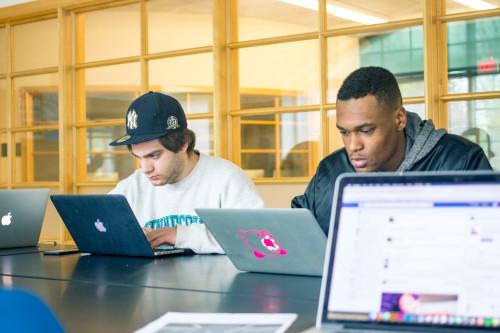 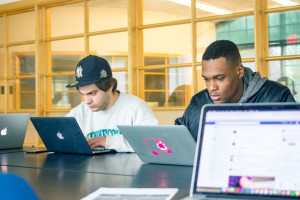 Social media consumes ever-increasing amounts of time in the everyday lives of people who constantly check their feeds due to FOMO (fear of missing out). It is society’s most efficient tool, yet society’s addiction is arguably its largest detriment. It is a resource for news, an outlet for sharing and a platform for constant communication. Since its inception, it has become exponentially more popular until the point of absolute social dependency.

A majority of Americans say they use social media as their primary source of news, according to Pew Research Center. Nearly eight out of every 10 online Americans now use Facebook, which comes out to 79 percent of the U.S. population.

“I think social media use has exploded because it is a quick way to gauge public affirmation of what matters,” professor of sociology Suzanne Hudd said. “It enables us to readily ‘measure’ that affirmation with things like retweets and likes.”

A large component for why society has become so addicted to social media is because people are subconsciously looking to conform. According to Kerr, Americans like to consider themselves individualistic, but in doing that, it ironically creates a sense of insecurity and loneliness.

Researchers linked social media use to individual characteristics, according to a study titled, “Development of a Facebook Addiction Scale,” by Psychology Reports in 2012. People who scored high for narcissism proved to be the most active on social media. Social media provides the opportunity for one to present themselves in a favorable way in line with their ideal self.

“We’re in a largely narcissistic culture. A narcissist is someone who has little to no sense of self and what little sense of self they have they hate,” Kerr said.
“It is about the constant construction and maintenance of their false self that is not their true self and the whole purpose of that false self is to elicit responses from other people.”

According to another Quinnipiac student poll, a majority say that they cannot go more than a few hours without having to open a social media application on their phone, whether it be to check, post or send content.

“First is to try to elicit positive responses. So I post something on Instagram and it’s a constant looking to see if people are giving me the thumbs up. If that’s not working, what is just as good is to elicit their rage and their reactions, even if it’s negative, that I can rage against, because this is a reminder that I’m still alive and people are still paying attention to  me whether it’s positive or whether it’s negative. So there is a lot of that going on with social media.”

Americans are living in the information age where people are finding the constant need to share, communicate and browse on their smartphones. American teens are more attached than any other group. Research shows that 24 percent go online almost constantly, whether it is through a mobile device or laptop.

Kerr said that there is a constant need to monitor ourselves and make sure we are fitting in with peers because people want to conform with a group that is now so vastly diverse compared to what was going on in the past. Social media gives people the ability to connect with others all over the world instantaneously who are so different from themselves and it makes the world seem like everybody has nothing in common.

“Part of the explanation for why social media has become so ubiquitous is that we’re having to deal and having to struggle with ‘how do we present ourselves in a manner to a diverse world in such a world where we don’t piss people off’ that we show that we can be like you,” Kerr said.

88 percent of American teens possess a mobile device, and 90 percent of them communicate through social media and/or messaging apps daily, according to Pew Research. The typical teen communicates through their smartphones about 30 times a day.

“Social media fulfills our desire for simple answers as to what is important or what should matter in our lives, be it in our personal lives, or what is happening in the world at large,” Hudd said. “It escalates the importance of others’ viewpoints, experiences and opinions, potentially at the expense of our own.”

The major two symptoms for social media addiction include increasing needs to engage with the object of addiction, and negative feelings when not getting enough of it. Studies by Psychology Reports have shown that smartphone and social media abuse have several negative effects on one’s life in terms of real-life communities such as academic performance and relationship issues.

The obsession with cyclic sharing in today’s world comes from a desire to not be excluded from those in one’s community.

“If I’m not on social media, it’s as if I don’t exist and if I’m not secure enough with myself or I can’t be by myself,” Kerr said. “I have to always get feedback so I’m always having to throw stuff up there in a narcissistic culture. ‘Whether they hate it or they love it, just don’t ignore me.’”

In the days before social media, most people grew up being in tune with the same types of media and news. There was a belief that two people from different backgrounds could relate to. Social media has had a vast effect on society because it has caused society to fracture in where everyone is connected to something different.

“(Social media) connects us to such a diverse range of things and the question is whether there is anything that holds us together anymore,” Kerr said. “That’s what we’re seeing in western democracy in that it’s starting to splinter and balkanize because there is not much in common that allows us to conform. We quickly are trying to (conform) with these phones but in many ways that is just creating more of a splintering effect.”

America’s obsession with smartphones and social media only feeds into why this industry will continue to grow economically. The more that people use it, the more the companies behind these devices and platforms learn, and the more they will capitalize.

“People feel compelled by the new morals, values and beliefs that come about in this information age to willingly and freely give this information up by using these devices that is worth a hell of a lot of money and we get nothing in return for it,” Kerr said.