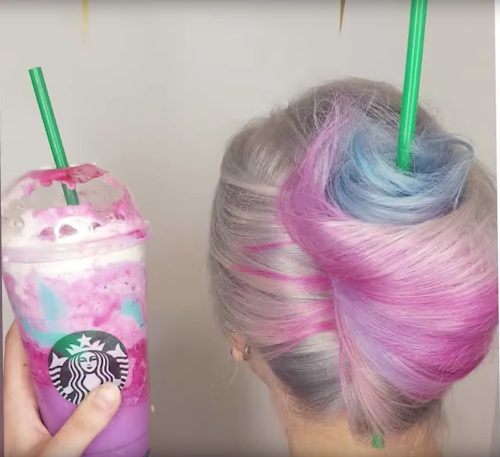 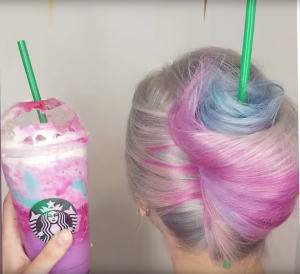 Have we taken this “unicorn” thing too far? The unicorn-colored food trend has been creeping up for a while, taking over our social media accounts. However, after Starbucks released its “Unicorn Frappuccino” on April 19, it’s turned into a frenzy.

Making its limited-time debut, most Starbucks cafés sold out of their Unicorn Frappuccino in the first day. The pink and blue drink mixed the flavors of sweet and sour and not everyone was a fan. People took to social media saying they enjoyed the colors, but would never get the drink again if they had the opportunity.

And to top it all off, the drink had 39 grams of sugar…and that’s only for a tall, or 12 ounces, of basically pure liquified sugar.

After the Unicorn Frappuccino slayed in purchases amongst the basics, an unofficial Starbucks drink, the Unicorn Lemonade, stole consumers’ hearts. Made with the leftover powder from the Frappuccinos, baristas found a new and short-lived alternative for one’s sweet tooth, according to USA Today.

So now that the Unicorn Frappuccino is gone from Starbucks, have no fear, there are plenty of colorful alternatives, if you’re okay with possibly upsetting your local Starbucks barista by asking to mix a bunch of different things to get your colorful drink.

One alternative could be the “Dragon Frappuccino,” a mix of the Green Tea Frappuccino, Vanilla Bean powder and Berry Swirl, according to Perez Hilton. This one definitely will fulfill one’s colorful drink needs.

A similar drink concocted by Starbucks lovers is the new “Mermaid Frappuccino.” This drink consists of a vanilla bean base with frozen blackberries drizzled with toasted coconut matcha sauce, according to Today.

Last year,  Starbucks revealed other colorful drink options called the Pink Drink, Purple Drink, Green Drink, yeah you get the picture. Now fans of those drinks are mixing them to create a two-toned drink to satisfy their color aesthetics, according to Perez Hilton.

You’re really going to anger your barista by ordering these drinks. If ordering the two-toned Pink Purple Drink, make sure you ask for the regular Pink Drink (Strawberry Acai Refresher with coconut milk) at the bottom. Then ask your barista to add ice and slowly pour in the Purple Drink (Passion Iced Tea, soy milk, vanilla syrup and blackberries) to create the ombré effect we all know and love, according to Popsugar.

You can try these selections soon in the new Starbucks Quinnipiac is implementing. Keep these in mind for next year.

If it weren’t weird enough that it seems like everyone is making all of our food into rainbows, some women took it to a whole other level by dyeing their hair the same pink and blue colors.

Caitlin Ford, a St. Louis hairstylist, shared pictures on her Instagram of her Unicorn Frappuccino inspired hairstyle, according to Cosmopolitan. Ford’s client honestly looks just like the Frappuccino, having her hair dyed mostly pink and then adding in a small streak of purple and blue diagonally down her head to create the full unicorn effect.

Ford isn’t the only one with requests for the unicorn look. A Winnipeg hairstylist, Kelly Woodford also graced one of her clients with some unicorn locks, according to Cosmopolitan. Woodford’s dye job, however, consisted of an ombré effect.  Starting with a grayish color then fading into colors of pink, purple and blue in layers at the bottom of her hair.

Woodford then styled her client’s hair into a French twist putting a green Starbucks straw to twin with the Frappuccino on Instagram.

So let’s get this straight — now we have unicorn food, drinks and hair? What will we see next for this trend?

Well, let’s not forget all the Snapchat filters embracing the unicorn trend as of late. Starbucks couldn’t pass up the opportunity to have a unicorn-themed Snapchat filter to advertise the popular drink, adding to the unicorn frenzy. However, Starbucks wasn’t the first unicorn filter we’ve seen. In the past we’ve had the one with the pink ears and purple horn, that when you open your mouth shoots out rainbows. Icebreakers also joined the unicorn trend with an icy unicorn filter.

So much color, so many unicorns. Will the madness ever end?