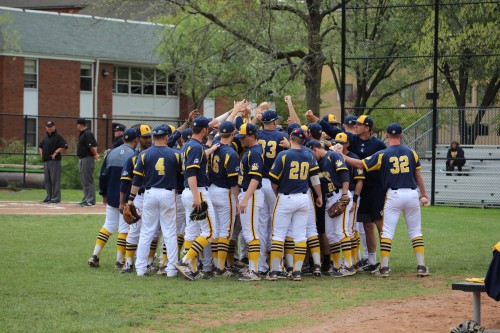 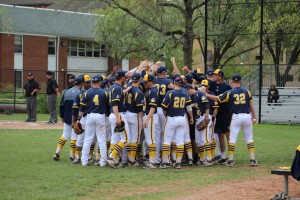 The Bobcats got off to a rough start in the first game, surrendering four runs in the first inning. Quinnipiac’s starting pitcher, junior Chris Enns, was immediately replaced in the second inning by junior reliever Wyatt Hamilton who went five innings and gave up just two runs.

On the offensive side, sophomore right fielder Liam Scafariello showed off his power by belting two home runs, while driving in three runs. This brought Scafariello’s home run total up to 15 this season, which means that he’s only the second Bobcat ever to hit 15 home runs in a single season.

“When you have a legit power hitter in your lineup it changes everything,” head coach John Delaney said. “When you have (Scafariello) who has the ability to leave the yard at any point with any swing, there’s a huge change in how pitchers have to approach him.”

Despite Scafariello’s solid day at the plate, the Bobcats were unable to catch a break, and fell to the Griffs 10-4.

Canisius’ J.P. Stevenson led the way for the Griffs, as he pitched 6 1-3 innings while giving up only four runs.

In game two, Quinnipiac junior Taylor Luciani and Canisius’ Andrew Kneussle each got the nod for their respective team.

Both pitchers struggled early in the first inning because each player dealt with respective bases loaded situations. Luciani found himself in a pickle with the bases loaded and nobody out, however, he was able to get out of the inning just giving up one run.

The only difference with Kneussle was that he had one out when he loaded the bases. That’s when junior first baseman Ben Gibson took advantage of the opportunity he was given and hit a grand slam. Junior Julius Saporito responded to Gibson’s home run with an RBI double himself, extending the Bobcats lead 5-1.

“We didn’t get off to a great start which ended up hurting us in game one, but to reverse that and come out swinging in game two is exactly what you want to see,” Delaney said. “You want to see resiliency like that and that’s what’s going to help your progress in the season.”

Besides Scafariello edging his way near the single season home run record, senior shortstop Matthew Batten added several more hits to his college baseball resume, including a two run shot over the left field fence to give the Bobcats a 7-1 lead. 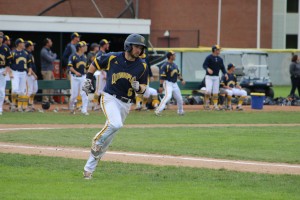 “We were very passive in the first game. I think we were all sitting location, sitting pitches and getting them and we weren’t able to do some damage with them,” Batten said. “[The pitcher] was getting into some good pitching counts.”

Batten is now second all-time in hits in program history with 239. Despite this personal accomplishment, Batten admitted that he wasn’t known for his hitting when he entered the world of college baseball.

“It’s been a process,” Batten said. “I didn’t come here as a great hitter. I was always known for my defense but working constantly with coach Delaney and Mike Palladino who works with me all the time.”

Quinnipiac will finish off their three game series with Canisius on Sunday April 30 at 12 p.m., which will also be Senior Day for the baseball team. Even though Senior Day is almost here, Batten couldn’t be happier with his past four years as a Quinnipiac student athlete.

“I love this program to death and I will do anything it,” Batten said. “It’s going to be sad but it will feel good to reflect on what’s happened here, all the friendships I’ve made and will never lose, and I’ll be happy.”