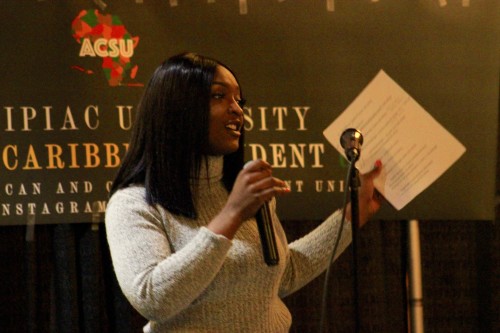 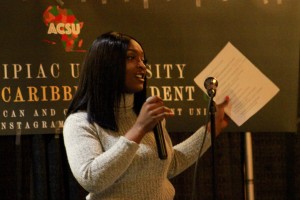 The African and Caribbean Student Union (ACSU) celebrated its first year as an established organization at Quinnipiac by hosting Afro-Caribbean Night at the York Hill Rocky Top Den on Friday, April 21.

At the end of the 2016-2017 school year, ACSU wanted to achieve something really big, according to senior communications major and president of ACSU Melanie Nyarko.

“I’ve been at Quinnipiac for four years, so I’ve really seen how much has changed and how much better we’ve gotten with diversity and inclusion, but we really just wanted visibility on campus,” Nyarko said.

Nyarko thinks ACSU differentiates from other organizations because all of their events so far have had an aspect of charity to it. For Afro-Caribbean Night, any proceeds would be donated to the Kiva foundation, which helps start up small businesses in third world countries.

Aside from aiming to entertain the student body with their event, ACSU also wanted to connect to the community outside of the university as well.

“If you identify as African or Caribbean, you also come from somewhere else so it’s also important to give back to that somewhere else,” Nyarko said.

The event offered the student body a taste of African and Caribbean culture, since there can be many people who have a lot of misconceptions about Africa and the Caribbean, according to sophomore business management major and vice president of ACSU Layomi Akinnifesi.

“Some people still think that Africa is a country or that the only things that people do in the Caribbean is like stay on the beach, so there isn’t a lot of recognition on the different diversities of the cultures within the Caribbean and African countries, so we made ‘Afro-Caribbean Night’ just to get a taste of that,” Akinnifesi said. 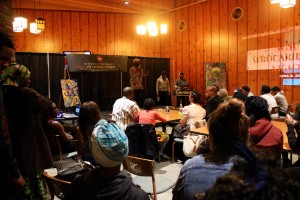 Afro-Caribbean Night included a series of segments that encompassed the beauty of both African and Caribbean culture, including music, poetry, a fashion show and a dance number by the university’s step dancing group, Step to Perfection.

Furthermore, ACSU invited Nigerian artist Faustin Adeniran to the event to present his artwork to the university.

Sophomore biomedical mechanical engineering major and secretary of ACSU Kevin Osei-Akoto said the event was an attempt to spread diversity around the university and educate the student body.

“We just want to let (students) know a bit about what we are and also for other cultures that have come to countries so far away from home, we want them to come to a place that is comfortable for them,” Osei-Akoto said.

“I am Nigerian, I was born in Nigeria and I feel like anything that is done to celebrate our heritage and just our culture is something that I would love to come to, so that’s why I came,” Adesina said. “I believe it was a success, people came out, people ate, people loved the speakers and the performers so I do think it was a success.”

Junior health science studies major Tyla Martin was also satisfied with the event, saying that she was compelled to attend because of sufficient advertisements around campus, as well as her involvement in the multicultural council.

“I like to make a point to support all of the diversity groups on campus and I heard a lot of good things that were going to happen at this event so I really wanted to come,” Martin said. “I like how they brought different parts of the community to Quinnipiac, because it’s not something you see everyday in an event so I can tell how much work they put into it and I think everyone appreciated it.”