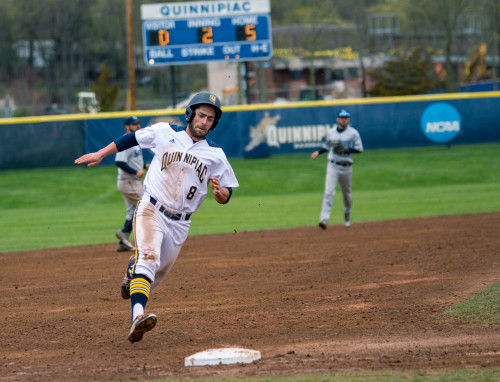 Quinnipiac had the bats going early and often on Saturday as it rolled to a 13-1 victory over Saint Peter’s. 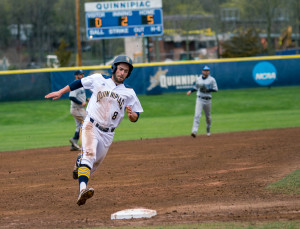 Due to rain, the doubleheader that was scheduled for Saturday was pushed to Sunday and the teams only played one game.

It was clear from the first inning that Quinnipiac would have its way with Saint Peter’s. After the Peacocks failed to score in the top half of the inning, the Bobcats exploded for five runs on five hits. Even though he would get much more run support later, that was really all that junior starting pitcher Chris Enns would need.

“Definitely a good job by my teammates to score a lot of runs today, it made my job easier,” Enns said. “Just to know that I had more runs to work with and more room to play with.”

Enns went full seven innings, giving up just one run (unearned) on seven hits and picking up the win. He had six strikeouts and threw a total of 98 pitches.

“Pretty solid stuff today, I felt good from the start,” Enns said. “It was kind of tough with the rain delay shifting everything three hours back, but I just executed my pitches and got the job done.”

Quinnipiac extended its lead to 6-0 in the second inning, and added another run in the fifth. The only real trouble that Enns faced was in the sixth inning. The Peacocks loaded the bases on three singles, then were able to breakthrough for a run on an error by third basemen Joseph Burns. Enns retired the next two batters to get out of the bases loaded jam.

“It’s huge for a starting pitcher (when the team scores early),” Quinnipiac head coach John Delaney said. “When you’re able to put up runs early in the game it gives them confidence to know that they can just throw strikes and even if they give up one or two hits they can still find a way to get guys out.” 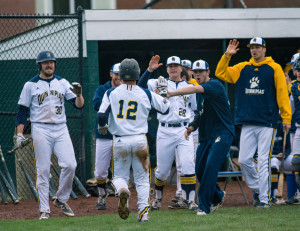 The Bobcats ended the game the way they started it by scoring five runs in the last two innings.

After losing nine of their last ten games, it was a much needed win for the Bobcats.

“The last nine games are in the past,” Delaney said. “The season is flipped over. We’ve eliminated everything that’s happened up until today. One day at a time and one game at a time.”

With 15 games to play, including two against Saint Peter’s on Sunday, the Bobcats still are determined to make something of their season.

“I think we still have one goal in mind and that is to win a MAAC championship,” Delaney said. “If this team catches fire like we expect them to do, this team is going to be dangerous come tournament time.”