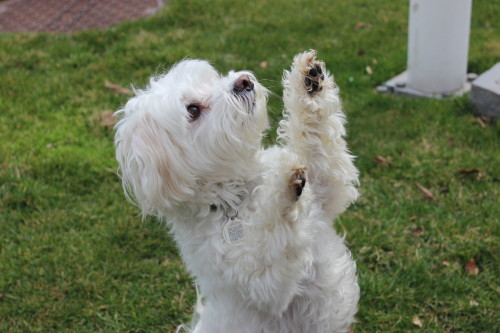 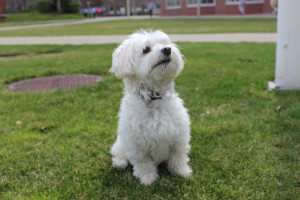 Quinnipiac is home to students of many nationalities, genders, religions and, as of this year, species. A dog became a Bobcat this fall. Ace, a Havanese and Maltese mix, has made a home on campus with owner Nadya Gill.

However, Ace did not originally come to QU with Gill.

As a freshman, Gill entered the Quinnipiac community under uncommon circumstances. After skipping the fifth grade, Gill was recruited at the age of 16 to play for the women’s soccer team. Coming from Toronto, Canada, Gill was not only at a new school, but in a new country with no familiar faces.

Although Gill says her teammates played a quintessential role in her adjustment to college, something was still missing: Ace.

As a sophomore business major and starting striker, Gill brought Ace as the eighth suitemate to her Hill residence hall this fall. Despite already having spent a year at QU, Gill says Ace has helped her adjust to college life completely.

Luckily, and unsurprisingly, Ace has been accepted by everyone at QU. Gill’s friends and roommates never pass up a chance to spend some time with their furry friend.

“My roommates love having Ace around. It’s so nice to play with him after a long day,” Gill said. “My friends will take him out and play with him when I’m busy.”

Sophomore accounting major Stephanie Martinez is one of these roommates.

“(Gill) texted my roommates and I about a week or two before move-in day and told us that we were going to live with a dog this year,” Martinez said. “I am a dog person and was super excited to have Ace live with us.” 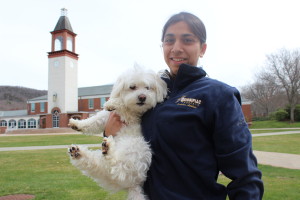 Martinez admits that she was not sure that living with a dog would be the best thing for her, but she believes Ace is a perfect addition to their room.

“At first I was excited but then I started to think what if he was going to be a distraction. So then I became nervous about living with Ace. But then when I moved in and the semester started he was the perfect distraction,” Martinez said. “Every time I needed a break or got too overwhelmed with something he was always there to jump on my lap or he would come up to me and drop the tennis ball in front of me to play with him. He just knows when you need some love.”

This affection towards Ace goes beyond Gill’s friends, as Ace has made a name for himself among the student body.

“I definitely receive more attention as someone who has a dog on campus,” Gill said. “Everyone loves dogs and sees him and wants to pet him, and that’s how they get to know me, as well.”

Ace often accompanies Gill to class, soccer practice and meetings whenever possible. He has even hiked the Giant several times but has yet to attend one of Gill’s away games.

The 7-year-old dog has the heart of a puppy, playful and indisputably adorable upon every meeting.

“He absolutely loves people and attention,” Gill said. “He’s such a good dog. There hasn’t really been any challenges (with having him on campus).”

Martinez believes that there is more to Ace than this puppy-like playfulness.

“He has two sides to him. He has his lazy and relaxed side and his crazy, energetic side. Sometimes he can just lay next to you all day and not bother you at all. Other days he can be ready to play as soon as you walk in the door and won’t leave you alone until you play with him,” Martinez said. “But like I said before it’s seems to be that every time I have a bad day he would keep bugging me to play with him. It’s like he’s telling me to lighten up and play a little.”

Ace also makes friends of his own kind.

“He can get excited at times when he meets other dogs, but he normally gets along with them. He gets along better with dogs his own size though,” Gill said. 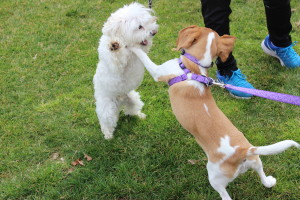 While the Quad is often full of four-legged visitors on the weekend and sunnier days, Ace is the only dog officially residing on campus, according to Gill. However, getting him here was not a challenge.

“The process to get him approved wasn’t very hard. I just needed to fill out some papers and submit it to Residential Life and have them approve them,” Gill said.

While many dogs come on campus for specific events, such as Ben and Tucker, the infamous golden retrievers who make an appearance around exam times, Ace is the only certified therapy dog living on campus.

Ace was certified by a doctor to be Gill’s personal therapy dog. His certification can be accredited to his warm, loving qualities, which Gill defines as Ace being a “person dog.”

Despite his recent hometown fame on campus, Ace has been an important part of Gill’s life for years. Gill’s family adopted him when she was 11 years old. With Gill’s father coming from England and her mother coming from Tanzania, it is no surprise their family did not look close to home when looking for their dog.

The family then picked up their purchase north of Toronto and Gill chose the name “Ace” for their newest family member.

Now, Ace is one of the biggest parts of Gill’s life at Quinnipiac. The two not only share a room but also share hobbies, as Ace joins Gill when she plays soccer. He mainly tries to bite the ball, according to Gill.

While he is no competition on the field, Ace has skills of his own.

“He is actually really good on his hind legs. It’s funny to watch him jump around in circles on them,” Gill said.

Ace always has a positive demeanor, loving treats and toys at all hours of the day. He is a dog that is easy to please and that is eager to please others.

“I believe Ace and every dog in general have a great effect on students around them. Dogs are cute and love to play around and enjoy life,” Martinez said. “Ace is a happy, caring, and loving dog. He’s super friendly and just love all the attention. He makes us all smile and laugh and makes us forget about all the things going on in our lives.”

Ace is expected to remain at Quinnipiac with Gill until she graduates. As far as pets go, this dog has aced the test.

“My relationship with Ace is amazing. I love having him around, and he is an amazing dog,” Gill said. “I hope to always have Ace here while I’m at QU. He just makes everything better.”

When asked what his favorite part about being a Bobcat is, Ace replied, “woof.”

Disclaimer: Nadya Gill is a staff writer for The Chronicle. This article is strictly about Ace.