Running on the record 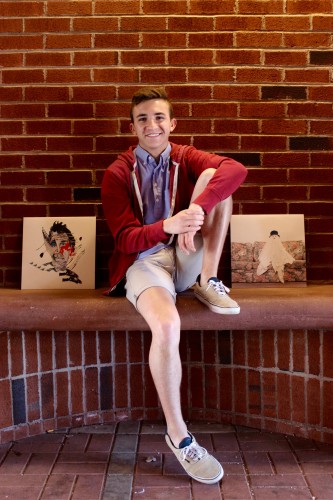 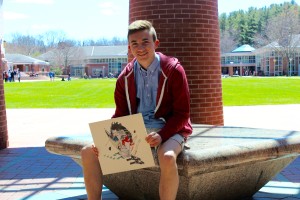 “I don’t really have an exact vision for myself at the moment.”

This is how Quinnipiac sophomore Ryan Ansel feels at this point of his college career.

For someone who is still unsure of the path he wants to venture, journalism major Ansel seems to be doing extraordinarily well. He’s an athlete, a journalist, singer, song-writer and musician, and he’s only in his second year.

Ansel is a student with an incredibly hectic schedule and impressively versatile lifestyle, starting with his presence on Quinnipiac University’s men’s cross-country team. He started running as a freshman for his high school varsity cross-country team in his hometown of Danbury and has not stopped since.

“Once I started running, I found I had a natural talent for it,” Ansel said. “And I was willing to work hard at it.”

Running 12 seasons straight, he never took a season off. The first season he ran, he won a county-wide race for freshmen. It is a day Ansel describes as a truly pivotal moment.

“That day I decided I was gonna stick with running,” Ansel said. “I knew I could probably get somewhere with it, and it paid off.”

And paid off it has. By his senior year, he was captain of Danbury High School’s cross-country team, a team talented enough to win the statewide race as well as place second in all of New England. These are what Ansel describes as the proudest days of his life.

Despite his obvious talent for the sport, Ansel remains incredibly humble and gives all the credit to his team.

“I wasn’t even a stand-out; I was just another member of the team,” Ansel said. “It was that good of a program, and I had that good of a coach that there were 10 other guys just as fast as me.”

Other than the obvious physical benefits, running has taught him to be the best possible version of himself, not just as an athlete but in all aspects of life.

“It taught me to be more diligent, more ambitious and more confident in myself,” Ansel said.

Confidence certainly comes in handy when he’s playing guitar as a featured artist at one of Montage’s Open Mic Nights. In addition to the grind of 8 a.m. weekend practices for cross-country, Ansel finds the time for another one of his passions: music. 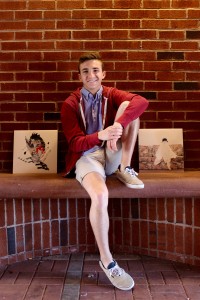 “Music is just another medium to express yourself,” Ansel said, “You feel so relieved when you make something.”

While he claims there is no musical background in his family, both of his parents had a hand in shaping Ansel’s interest in music. He recalls sifting through their extensive record collection which featured the likes of Billy Joel compilations, Guns N’ Roses, Def Leppard and an assortment of ‘80s music.

It seems collecting records is a hobby Ansel’s parents have passed on to their music enthusiast son, as he started his own collection in his junior year of high school. For his birthday last year, he received a record player along with a few records, the start of a collection that continues to grow.

Whether it’s visiting his favorite record store back home or the five or six stores he has become a regular at since coming to college, he now describes the hobby as an obsession.

“I’ve spent so much money on them. It’s almost like an addiction,” Ansel said, “For some reason, having the physical element of the music is just really meaningful to me. It makes the music really special.”

Ansel even commemorated his devotion by getting a tattoo of a record player for his birthday.

“It might be stupid in four years or I might not be collecting anymore, but it will always be a memory of how much happiness music brought me at this point in my life,” Ansel said.

His love for music and art extends to his own songwriting. He’s taught himself guitar through tutorials online and even made a demo which features songs recorded in his dorm room.

His passion for the artistry behind the art is obvious, and his experience in the creative realm is advantageous as it is something that applies to what he is studying here at QU.

In his major, Ansel has followed his passion for creating through another form of expression.

In addition to having hosted a radio show on WQAQ for his first three semesters at Quinnipiac, participating in Q30’s #That segment and writing for his own music blog, Ansel’s currently contributing to the music publication, Divide and Conquer, for which he writes album reviews for unsigned artists. Ansel was introduced to them after they had reviewed his own album last October. He approached them and thought he could bring something as a contributor. Evidently, they thought so, too.

Reviewing albums through writing is a place where he can bring his passion for both industries to life.

“It boosts artists’ confidence, it’s good marketing and it encourages musicianship, which is exactly what I want to be doing,” Ansel said.

As a journalist with a huge appreciation for musicianship, Ansel hopes to shed light on the hard work behind a piece of art.

“I guess I’ll never be 100 percent artist or 100 percent journalist,” Ansel said, “I’m almost converging the two. I just want to apply my talents in any way I can.”

It’s an alternative take: an artist covering other artists. But it is one more genuine and, therefore, appreciated.

“As a journalist, writer and artist, it’s our job to share everybody’s stories,” Ansel said, “The more stories you share the more people learn.”

While it’s obvious that Ansel always has a lot on his plate, nothing is done half-heartedly.

Ansel’s teammate, Dylan Fearon can attest to that.

“He’s not just involved in a bunch of stuff. He’s good at everything he does,” Fearon said. “He has a great mind.”

When asked how he manages to stay afloat in the midst of so many ongoing activities, responsibilities and projects, Ansel spoke the simple truth.

He carries an attitude most can only hope to emulate.

“It’s never hard to get yourself to do something if it’s something that you love,” he said.

It is this bit of wisdom he imparts that carries over into his love of life.

And just like that, he has inspired us to do the same.