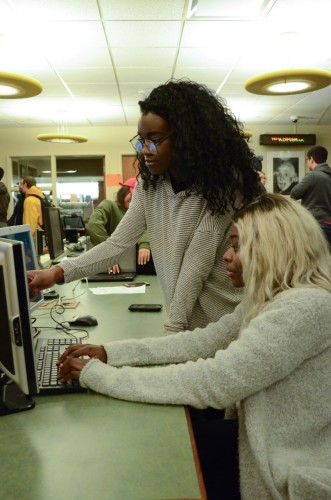 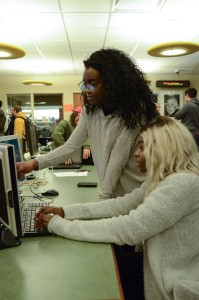 The seemingly hidden treasure of the Quinnipiac Tech Center has assisted students, faculty and staff alike over its 20 years of existence on both the Mount Carmel and North Haven campuses.

Only going to the center for typical computer fix, Bobcats don’t tend to pay attention to the student staff performing all the magic behind the glass wall. Working behind the scenes, the student and professional staff are known for ensuring secure and reliable technical support to the QU community, while providing hardware and application assistance, according to its Facebook page.

“We support students, faculty and staff, especially people on the other campus such as law students and medical students,” Executive Director of Technology Services Matthew Romeo said. “We have an incredibly efficient staff for the size that we have.”

Consisting of students of all years and majors, the student staff at the Tech Center is responsible for most of the phone and walk-in services, according to Romeo. Students receive their position typically through work study but can also be chosen based on their experience and skill in the field.

“We look for people that are technologically inclined and come from the gamut of majors and experiences,” Romeo said. “They do go through an application process and then additional training. I think ours is somewhat unique in that we do have them in a little earlier to go through some paces and training and prepare themselves in that regard.”

Students can attain this job throughout the school year or, if available, in the summer as well. FanonX Rogers, a senior computer science major, started his experience with the Tech Center this past summer.

“We test out the equipment and the Wi-Fi going to classes, if media works and stuff like that. We also test out printers to make sure the printers are working,” Rogers said. “There’s nothing really hands- on with students; it’s just making sure the infrastructure here is maintained and working so when the students come back everything’s set up.”

Throughout the year, the focus gears more towards students and staff on issues regarding classroom support or beginning of the year problems such as setting up a printer or downloading Microsoft Word.

“We get a lot of initial calls, especially the first week in the fall semester surrounding more policy. We get peaks, acute peaks, very, very specific and as we solved the problems they went away,” Romeo said. “It mostly goes a week into the semester or even two days and then levels out.”

For a day in the life of a student worker, an average day consists of many calls and work at the Tech Center, but also work-on-the-go throughout campus.

“Most of our day consists of troubleshooting, installing Microsoft products, finding anti-viruses and a lot of classroom support,” Melanie Nyarko, a senior communications major, said. “We have new systems of displaying (professors’) PowerPoints and stuff, so a lot of them don’t get it, so that’s mostly what we’ve been doing for the last month.”

Nyarko has worked in the Tech Center since the beginning of her sophomore year, and despite her original decision to work at the center because it had been known for being “easy,” she has since found that the work has enhanced aspects of her major and basic skills for the future.

“Although this is a student job, it’s a relevant student job, so I was really happy that I ended up working here because if I worked somewhere more random it wouldn’t have been as beneficial,” Nyarko said. “When I go on interviews and talk about some of the things I’ve done here, they realize I’m doing something real. It pays off.”

For those who are technology-based majors, the Tech Center can also serve as an addition to their knowledge on specific applications and tools that are even being taught in the classroom.

“It’s easy for me only because I know what I have to do,” RJ Doumas, a senior computer science major with a minor in biology, said. “It’s quiet, hours are good and full-time members are amazing to work with. They’re very helpful. We also get to drive golf carts to move equipment around.”

As technology at Quinnipiac becomes more advanced, Romeo has found that common problems students have had with university-based sites and applications have begun to gradually decrease and eventually diminish.

“With the efforts that the school has put into technology, as well as a very technological incoming class, especially the last two years, even the last year, my belief isn’t that people don’t know we’re there,” Romeo said. “It’s that people are able to solve their own issues, and there are few of those issues in general.”

Faculty and students alike encourage those in need of service to utilize the center as a beneficial resource for common technological knowledge along with the more known support of physically fixing computers or printers.

“The more complicated things become, the computer becomes smarter and more complicated. I’ve just seen an increase over the years for basic stuff like Excel or ‘How do I make a graph? My password doesn’t work,’” Doumas said. “I don’t think in any way technology customer service is becoming obsolete; I feel it’s increasing in demand.”