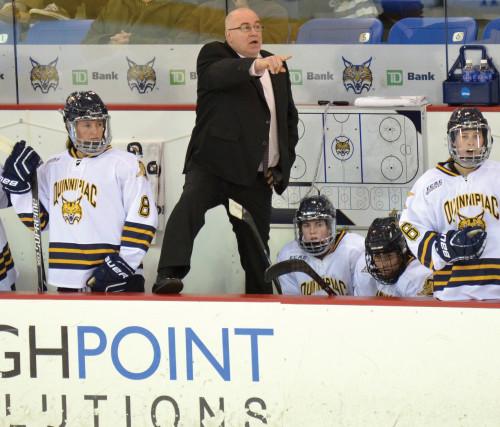 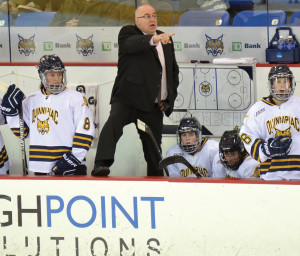 Due to the graphic nature of the content, reader discretion is advised.

Seeley coached at Quinnipiac from 2008-2015 and, according to the memorandum filed in the New Haven Judicial District Court, the University investigated an incident in which he grabbed one of his players at a game against Harvard on March 14, 2015.

Seeley replied to Bills’ special defenses on April 13 and denied all allegations made against him. Seeley’s lawsuit against David Bills will be going to trial on July 18.

Following the investigation, the University “decided that it would be best to separate you (Seeley) from employment,” it said in a letter to Seeley dated April 9, 2015, signed by former Vice President of Human Resources Ron Mason.

At the time of Seeley’s firing, McDonald, who has been the athletic director at University of New England since Fall 2015, told Quinnipiac Bobcats Sports Network (QBSN), “Obviously if we knew what is being alleged, then (the hiring) just wouldn’t have happened.”

Yet, the surveys, dating back to 2009, paint a different picture.

In the QBSN article McDonald said that the athletes fill out the surveys and said that there were no problems up until the 2013-2014 season.

In an email to Q30 Television, McDonald said he would not comment on the memorandum or anything pertaining to it.

Associate Vice President of Public Relations John Morgan told Q30 that the university will not comment on ongoing legal matters.

***
Surveys outline alleged abuse dating back to 2009
The 2009-2010 survey outlined alleged verbal and physical abuse by Seeley. Despite their success, players indicated that it “comes at the expense of emotional distress and verbal neglect” and that “the environment is extremely intense and often can get the best of a lot of players.”

Another player wrote that, “coach was a crazy man, in a less then (sic) positive way.”

One player recommended a team psychologist.

“Not only does he (Seeley) break the rules but he tries to scare you into not telling on him or he won’t play you. He pushed someone off the bench once because she wasn’t having her best game. He has thrown people’s sticks across the room and grabbed us by our jerseys. We watch film on the bus rides home, we watch film on the day of games and we practice way over our hours… [H]e  treated us like sh** and he always tries to make us feel worthless…”

The 2013-2014 surveys contain allegations of verbal and physical abuse yet again.

“Players cited more NCAA violations, commented on Seeley’s anger issues and use of fear, and indicated he (Seeley) ‘probably shouldn’t aim a slapshot at a player that did something wrong in practice,’” the motion read.

Although Seeley’s knowledge of hockey was praised, players continued to note problems like swearing at the team and his extreme temper. Moreover, players noted, “(Seeley) sometimes personally attacks individuals.”’

Throughout the memorandum, players allege that Seeley physically and verbally abused former star forward Kelly Babstock during her time on the team.

In a meeting with athletic administration Babstock alleged that Seeley told her, in front of several teammates, that he, “love (sic) everyone except (Babstock). If I (Seeley) went back, I would never have recruited (Babstock).’”

According to the document, Babstock lost track of the amount of times Seeley called her, “f***ing stupid.”

Babstock also alleged that Seeley physically abused her at an away game versus Rensselaer Polytechnic Institute (RPI), saying that he, “grabbed her at RPI by the collar and dragged her up a couple of steps and sent her into the locker room.”

Babstock played from 2010-2014. The program’s all-time leading scorer, she is regarded by many as the greatest player in Quinnipiac women’s ice hockey history.

The memorandum notes that Cassandra Turner, current head coach and assistant under Seeley, said that Seeley has had problems with his best players and feels threatened by them.

Turner recalled Seeley saying, “Why would they want you (Babstock)? If you can’t do it here, how are you going to do it there?”

Players’ allegations of abuse ticked up noticeably in the 2014-2015 surveys — the most controversial incident occurring at the Harvard game.

The memorandum contains multiple accounts of what allegedly happened at the Harvard game between Seeley and T.T. Cianfarano, then a freshman forward.

Accounts of alleged abuse at the Harvard game

The responses below do not mention Cianfarano as the player directly involved, but she is identified as such in Exhibit J.

In 2015, the Bobcats program reached a milestone: the NCAA tournament. But a 5-0 loss to conference-rival Harvard proved to be not just the end of the season, but a tipping point when assistant coach Turner reported an explosive incident to McDonald.

Below are multiple player accounts of the incident from portion Q3 of the 2014-2015 survey of what happened on the ice in Cambridge, Massachusetts:

‘”(Seeley) Physically went at one of my fellow teammates yelling/swearing at her (Cianfarano), and pulling her face mask. It got so physical that Paul (Nemetz-Carlson) pulled Rick (Seeley) off our teammate and pushed him away. Rick then pushed Paul away and said “Don’t ever f***ing touch me again, Paul….”’

“At the Harvard game at the end of the season in a game Seeley got angry at (Cianfarano) for a play she had just made and when he didn’t like her response to what he had just said to her he grabbed her upperbody and spun her head around and continued to scream and say ‘F*** You” in her face. Not only did we (teammates) all see the incident but my parents, other parents, parents on the other team, and players on the other team saw this incident and was horrified.”

Turner reported this incident “because she (Turner) was afraid Quinnipiac would be sued,” according to the motion. 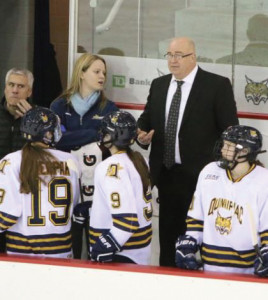 In the meeting, Fritz-Ward told Mecca about the incident at Harvard along with other instances of verbal and physical abuse by Seeley in her time at Quinnipiac (2011-2015).

According to Mecca’s notes in Exhibit J, Fritz-Ward said that Seeley made comments to players about matters including but not limited to slicing their wrists after losses, belittling players using the “f” word, Seeley threatening to take scholarships and playing time away if players ratted him out.

Mecca did not return a phone call from Q30.

Using a racial slur when telling the team to lower music in the locker room:

In a meeting with athletic administrators including McDonald, Fritz-Ward discussed Seeley’s alleged use of the “n” word when telling the team to lower music in the locker room.

In another meeting between athletic administrators and several members of the women’s ice hockey team, other members of the team verified Seeley’s alleged use of the “n” word.

In a meeting with senior human resource business partner, Lori Musante, Turner said that she did not hear the alleged comment about the music. Assistant head coach, at the time, Paul Nemetz-Carlson said that he did hear Seeley tell players to turn music down, but there was no mention of a racial slur.

Yanking and grabbing Kelly Babstock at an away game vs. RPI during the 2013-2014 season:

In a meeting between athletic administrators and Fritz-Ward, she alleges that Seeley grabbed Babstock, pulled her off the bench, and sent her to the locker room.

Seeley claimed that McDonald would never get him in trouble and that McDonald always had his (Seeley’s) back no matter what. Players stated that Seeley told them “the surveys are not confidential because Jack (McDonald) is like a father to him so he will tell him who said what.”

When asked by administration why they had not reported any of these allegations of abuse earlier, the players said that they were scared Seeley would take away their scholarships and playing time. Some players were even scared to attend the meetings with athletic administrators.

***
Did Quinnipiac know?
Seeley is suing Bills for defamation after Bills sent Q30 notes two years ago alleging Seeley abused players at Clarkson, including his daughter Cortney who was on the team.

Q30 published those notes about a week after Seeley’s termination.

Yet, Bills’ story to Q30 bears striking resemblance to what Bobcats players reported in their surveys.

In the memorandum, Cortney and her former teammate at Clarkson, Jill Nolan, signed affidavits saying under oath that Seeley allegedly verbally and physically abused them and their teammates at Clarkson.

David Bills and members of both teams have referenced the following:

Clarkson: David and Cortney Bills and Jill Nolan allege that Seeley frequently used profane language, particularly the “f” word. In her affidavit Nolan alleges that Seeley, “would call me and other members of the team “sluts.”

Quinnipiac: Throughout the memorandum, Quinnipiac players allege that Seeley cursed at them, again using mostly the “f” word.

Clarkson: In Jill Nolan’s affidavit, she alleged Seeley “grabbed players by their face masks, jerking their heads around, and also by their jerseys to get their attention before screaming and yelling at them.”

Quinnipiac: There are multiple references in the memorandum to the Babstock and Cianfarano incidents.

Clarkson: In Cortney Bills’ affidavit, she alleged Seeley “intentionally shot hockey pucks at players when they made mistakes.”

Quinnipiac: When Quinnipiac women’s ice hockey players met with athletics administrators, they mentioned a similar situation in which Seeley “took a slapshot at former player Olivia Agostinelli, missing her head by inches.”

Clarkson: In David Bills’ deposition transcript, he alleges that Cortney is still receiving counseling for what Seeley did to her at Clarkson, saying, “she (Cortney) never got over what happened at Clarkson. And we just always tried to forget about it.”

Quinnipiac: In the 2009-2010 survey, one player alleged that the team’s success, “comes at the expense of emotional distress and verbal neglect. Consideration should be given to provide a more balanced atmosphere.” Another player suggested the team hire a psychologist.