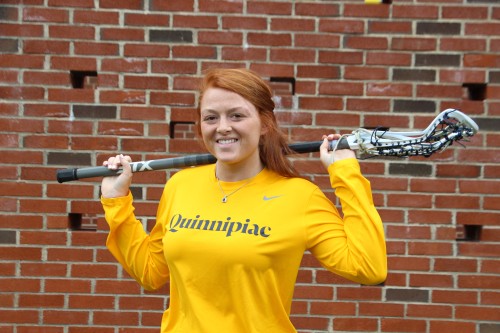 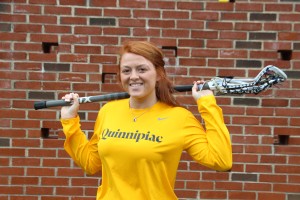 While many student-athletes are exclusively known for their success on the field, that isn’t the case for Quinnipiac women’s lacrosse player Allison Kuhn.

Kuhn, a sophomore from Kingsville, Maryland, was elected as the Class of 2019’s vice president for the Student Government Association (SGA) last week. This won’t be Kuhn’s first year on SGA either, as she has been a class representative the previous two years.

While Kuhn’s campaign was successful, she had to face the challenge of campaigning while her season was going on.

“It’s actually very difficult because while my competitors have the opportunity to campaign whenever they want, I have a responsibility here with lacrosse and that has to come first,” Kuhn said. “I’m a student-athlete, but being a part of the lacrosse team is all day, every day. Everything you do, you think about lacrosse, whether it’s meals or sleep time.”

And because Kuhn’s workload is so heavy, she has to make sacrifices to accommodate her schedule.

Kuhn has also been a top performer for her team. Kuhn leads the team with 25 points and has 18 goals so far this season. Women’s lacrosse head coach Tanya Kotowicz, who is in her first year coaching the team, knows that Kuhn is more than just an athlete.

“She’s an all-around kid,” Kotowicz said. “She definitely believes in the big picture. She gets involved in everything, on-campus, off-campus, on the team, in practices, in games; she’s connected with her teammates and with her peers on campus. I think we strive to find all-around people, let alone all-around players, and Allison is just one of the many.”

Kotowicz could tell that Kuhn was competitive from the moment they met.

“She’s full of energy, she’s a fierce competitor, and that comes across right away,” Kotowicz said. “She’s ready to make something great out of the program, and we’ve kind of taken that and ran with it. That’s been a great piece that Allison brings to the team.”

One of Kuhn’s teammates, sophomore midfielder Ellie Swenson, says that Kuhn’s competitive personality shows when she’s on the field.

“She’s a very aggressive player,” Swenson said. “She’s one of our go-to offensive players. She definitely leads the attack. She knows a ton about lacrosse. She definitely has the passion and heart that we need.” 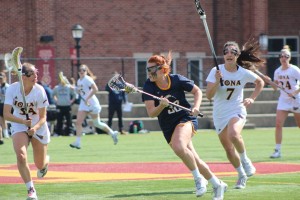 Even with the heavy workload, Kuhn doesn’t believe either has a negative impact on the other. In fact, she believes that it helps her.

“I think if I was not as involved I would be failing out of school,” Kuhn said. “Keeping me involved really keeps my GPA high… I think having all of these regimented times to abide by helps me to focus in on what I need to do on schoolwork. I can’t take anything off.”

Kuhn says that in SGA meetings, she takes off her “athlete hat” and puts on her “SGA hat,” but that she still represents Quinnipiac’s student-athletes in the meetings.

But Kuhn believes that her involvement with SGA has been positive and has helped bridge the gap between SGA and student-athletes.

And not only has Kuhn become the first student-athlete in SGA, but one of her teammates, freshman midfielder Victoria Bobinski, was elected as the vice president for the Class of 2020 last week.

Kuhn’s biggest initiative when it comes to student-athletes is to help them get priority for scheduling classes.

“Many members are looking into how student-athletes can get priority scheduling because we are at a disadvantage,” Kuhn said. “My practice is from 7-11 a.m. and what classes are left when we have to schedule are the 8 a.m. classes that no one wants to go to. But I have practice time, so how am I supposed to find a class?”

Swenson echoes Kuhn’s thoughts on the scheduling issue and says that team supports the two members of SGA on their team.

“I’m definitely pro the possibility of athletes registering first,” Swenson said. “It’s a pretty big deal when you have 20-plus hours less than any other student. You have your practice block and you have time to take class, that’s just how it is. If you’re caught to choose between class and practice that’s a huge thing. If you can’t make class, then you don’t graduate on-time. If you miss practice, then you’re not with your team to connect with them.”

All in all, Kuhn has enjoyed her time on SGA and looks forward to being a part of student government for the rest of her Quinnipiac career.

“(SGA) respects that I’m an athlete, they respect that Victoria is an athlete and that we are going to miss some meetings,” Kuhn said. “SGA’s been super accommodating. They’ve been great, and we’ve got a great e-board next year, so I’m really excited.”