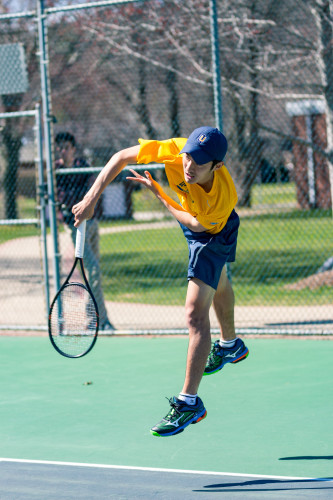 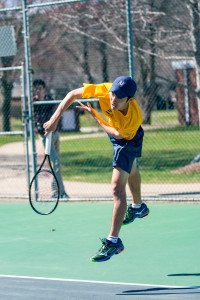 What goes through a player’s mind when he or she just made school history? For Quinnipiac men’s tennis captain and senior Kei Ezaka, it’s more of an afterthought. Actually, it really wasn’t a thought at all.

“I really didn’t realize it,” Ezaka confessed after winning his 138th career match, which is now the highest total in Quinnipiac tennis history. “We were so focused on getting a conference win against Marist… but I feel good about it.”

The historic win came in a doubles match last week with his partner, junior Kyle Alper, as the two have become a dynamic force in the MAAC this season. The duo has built a strong chemistry and belief in one another that has helped the Bobcats reach the top of the MAAC standings.

“If one of us is struggling, we know we have each other’s backs to carry us through that part of the match,” Alper said of his relationship with Ezaka. “It’s an honor to be sharing the court with him.”

Ezaka’s growth as a doubles partner is a product of his growth as a teammate. A top-100 recruit coming out of high school, Ezaka came to Quinnipiac with a tunnel vision of the type of player he was going to be. He focused on his own game and dominated his singles matches out of the gate, rattling off 13 wins in a row to begin his singles career. For Ezaka, it was all expected.

“I was a really cocky kid,” Ezaka recalls of his mentality as a freshman. “I told myself that I wasn’t losing to anybody. I just hated losing. Three years ago, I hated losing individually. Now I hate the team losses more.”

In an individual sport such as tennis, Quinnipiac head coach Chris Pappas recognized the difficulty of transitioning from the high school to the collegiate level. The difficulty was magnified even more for a highly-touted recruit like Ezaka, who spent his junior tennis career traveling the world and only playing in individual tournaments to prove his abilities.

“Junior tennis becomes very individualistic,” Pappas said. “It’s a tough transition sometimes when you come to college and are now playing for a team. It’s a different motivation.”

Thirteen straight wins signified a smooth transition, but the team as a whole would still need improvement and would turn to its best player for guidance.

Ezaka began to realize the team-based nature of college tennis as a junior, when the team reached a crossroads after losing a number of key players. As the team’s most talented player, it was time for Ezaka to step up as a leader. 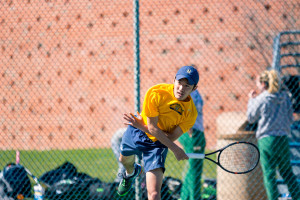 “We had a lot of obstacles,” Ezaka said about his junior year. “I felt I had to step it up for the team. I learned last season that I can’t be selfish to win for myself. It doesn’t matter if you win your match and your teammates lose. That’s still a loss.”

Pappas noticed a change in Ezaka’s attitude as well, which resulted in better play for the team in the form of seven wins in eight matches en route to a trip to the MAAC Finals against top-seeded Monmouth.

“When he felt he had to do it for the team and not just himself, I think it brought his level of play up to another stratosphere… he truly did it for the team,” Pappas said. “The more he did for the team, the more individual success he had, as well.”

The individual accolades have come with the team’s success. Ezaka’s trophy case is crowded, from MAAC Rookie of the Year as a freshman to MAAC Player of the Year last season. Ezaka considers the latter to be his most meaningful achievement given how far the team came in that turbulent junior year.

His performance as a junior when the team needed him most led to him being named the team MVP, but one award still remains on Ezaka’s wish list: winning a MAAC Championship for his teammates.

The individual wins no longer matter like they did for Ezaka as an underclassmen. A conference title would be better than any of the 140 victories that preceded it.

Ezaka has always had the competitive fire to win. His ability to transition that fire to win for his teammates is what makes him so valuable to his coaches.

“He has been such a great leader by example,” Pappas said. “He’s really been helpful to shape the standards of this program that we want to reflect. He deserves a lot of credit for setting up the ideals that we feel this program should have.”

This may seem like a heavy burden to carry, but Ezaka embraces the responsibility.

Thanks to his team-first mentality, Ezaka now stands alone in the Quinnipiac record books.