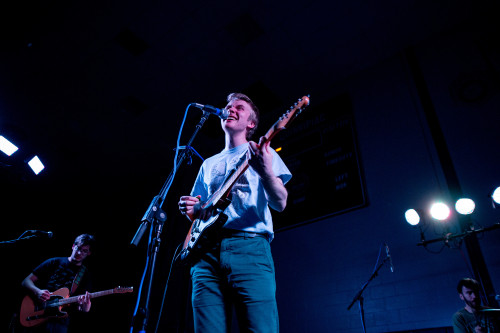 The energy in the building for 2017’s event, however, would have attendees questioning why indie rock isn’t a more mainstream genre.

This year’s show was headlined by multi-instrumentalist Alex G and featured support from Pinegrove, Crying and Half Waif.

Sophomore Emma Nykamp appreciated the choice of artists for this year’s event.

“Having some lesser known alternative acts on campus was incredible,” she said. “It allowed the community to be exposed to a different and unique type of music you wouldn’t normally find headlining Quinnipiac events.”

Nandi Rose Plunkett, known by her stage name, “Half Waif,” was first to take the stage. The Massachusetts native, who also spends her time as a touring member for another band in the night’s lineup, Pinegrove, brought her  thunderous vocals and lyrical complexities to complement genre-melding instrumentals.

Seamlessly transitioning between indie rock, electronica and even delving into dream pop sequences, Half Waif brought an ethereal, vocally driven sound to the stage, and the audience seemed to thoroughly enjoy it.

Run For Cover Records signee Crying was next to grace the stage. The New York rockers, fronted by Elaiza Santos, have a magical relationship between vocalist and band. Hitting every note, Santos’ classic smooth but versatile indie rock voice seems to have a symbiotic relationship with the instrumentation, feeding off the chaotic rhythms from Ryan Galloway on guitar and the hard hitting-DIY punk-esque smashing from drummer Kynwyn Sterling.

Crying set itself apart early and often, proving its ingenuity with a sound of fun nostalgia, the same kind you get from turning on your Game Boy for the first time since elementary school.

Easily the most energetic performance of the night came at the hands of Pinegrove. The New Jersey natives, also signed to Run For Cover Records, seemed to be the fan favorite, garnering the biggest reactions from the crowd both on their entrance and exit to the stage.

Vocalist Evan Stephens Hall stole the show with his dense lyricism and genre-defying voice, allowing Pinegrove to perform in a league of its own. Every member of the band, outside of Hall and drummer Zack Levine, is a touring member, but no matter the makeshift lineup, the band sounded tighter than ever.

Blending folk, country and indie rock, Pinegrove is everything that is good in the americana subgenre. Hall’s songwriting leaves absolutely nothing to be desired, telling stories with a vocabulary so dense, it would be helpful to keep a dictionary nearby.

It’s not often that seeing a band perform will make the audience feel smarter, but Pinegrove certainly challenges that.

The event’s headliner, Alexander Giannascoli, also referred to by his stage name “Alex G,” was last to show off his talents to the crowd that gathered at Quinnipiac.

Giannascoli’s music has a homegrown feel, as his early releases gained popularity on the online platform, Bandcamp, where artists can release their music directly to the public via download or purchase.

His bedroom creations quickly gained momentum, as his LP’s feature a distinct lo-fi style, making use of every technical flaw in the recording process to give the project a unique sound.

He’s an artist reliant on his versatility, both with his ability to play a plethora of instruments, but also by the fact his live shows bring a whole new atmosphere than the recorded counterparts.

He’s constantly bringing something fans have yet to hear to the stage. While performing live, he loses the edge gained from the purposeful flaws in production. Regardless, his skill remains, proving just how talented of an artist he is.

The night was a success for WQAQ, bringing together some of the brightest bands in the future of indie rock. Blinderman was pleased with this year’s event, noting that it even outsold last year’s Spring Fest.

“We actually sold more than 100 more online pre-sale tickets than we did last year, so I’m definitely very excited about it,” Blinderman said.

Peggy O’Sullivan, a senior at University of Massachusetts Lowell, drove two hours to see the show, calling it a “dream lineup.”

“I think it’s really cool a school like Quinnipiac would put on a show like this. There’s something very cool, everyone is taking everything for face value,” O’Sullivan said. “This show in general made me really happy.”