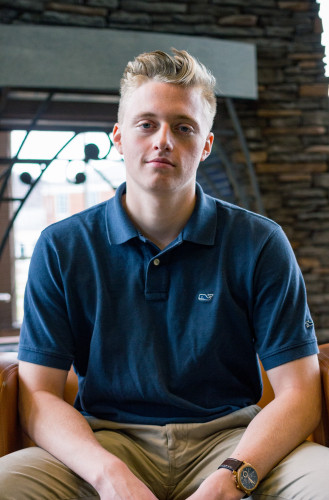 On April 5, the 2017-2018 elections for the Student Government Association (SGA) began, allowing the student body to vote for whichever candidate they deemed most qualified for the position they were running for.

In the end, Lynch won the position with a lead vote of 49 percent. Lynch will be the successor of senior Joseph Mullaney, who was the previous student body president.

Lynch said that he feels very proud of his supporters and everyone that believed in him throughout the election process.

“I think either Ali (Munshi) or myself would have done a great job in the position, and to know that the majority of the student body putting their faith in me speaks a lot to what they expect from a student body president, and I think I can offer a lot to everybody,” Lynch said.

However, that plan changed during Lynch’s freshman year after he was approached by another student in his dorm asking for a signature to get into SGA. That encouraged Lynch to attend an information session and join the association himself.

“As soon as I got into the organization, it was completely different from anything I have ever done before and I liked the challenge. From that point I knew that I wanted to be a part of the organization all four years of college,” Lynch said.

Lynch’s interest in SGA led him to later be motivated to become student body president after learning from former president, Mostafa Elhagger.

“He was such a great leader and the way student government was ran my freshman year was very goal-oriented, no distractions, very focused, and I looked up to him like crazy,” Lynch said. “He was one of my biggest role models, and that’s how I thought student government was going to be all four years of my time here at Quinnipiac.”

It was a very stressful time during the campaign, Lynch said.

“There were times where I had so much work to do, but I also had to campaign and it really narrows down to how bad do you want it, and I know that for the betterment of this organization I needed to go after and put everything I could into it and that’s what I did and it was worth every single minute of sleep that I didn’t get,” Lynch said.

Junior political science major Murphy Siegel is a friend of Lynch and a major component in assisting Lynch throughout the campaign.

“Ryan (Lynch) was the first person I met at Quinnipiac,” Siegel said. “We were in the same room during Orientation and the same hall freshman year. He’s been one of my best friends ever since.”

Siegel said that he has always been known as someone that people go to for political questions and strategy and Lynch asked him to edit some notes he was writing for his campaign. This eventually led into late-night meetings regarding strategies to ensure that Lynch would convey what he wanted in the best way possible.

“We prepped for the debate, mapped out door-to-door times, coordinated on social media releases,” Siegel said. “Ali is one of the best public speakers I know, and Ryan trusted that I would be able to coach him to be up to the challenge.”

In the time Siegel has known Lynch, he said he has never seen Lynch as focused and intense as he was during election week.

“I wouldn’t have agreed to help out if I didn’t think Ryan was the best man for the job. I am just honored to have been a part of his run and I know that he will do his best to keep the promises he’s made and make Quinnipiac a better place,” Siegel said.

Junior spanish major Collin Fishman said that something he hopes that SGA would be able to do is to find a way to help apply greater accessibility to students who don’t live on campus.

“It would be nice for commuters if we could get more parking,” Fishman said.

Lynch said he already has a plan to improve the university that includes greater representation within the organization, since he feels SGA needs to not just ask for the students’ opinions but gain more student embodiment.

“Under the umbrella of SGA, we would have a representative from club sports to a multicultural group that feels unheard to people fighting for certain rights for certain organizations,” Lynch said. “If we have more people as more people come to SGA and utilize SGA, not to have us necessarily speak 100 percent on their behalf but to use our platform to talk to administration they know what they’re talking about more than we would.”

More students are coming to the university and so are their opinions and demands, Lynch said. Lynch believes it is about time that administration starts listening to the student body because a lot of change has happened on campus that they didn’t prepare students for.

“When (the students) were touring this campus, no one was told that they had to be forced to live in what once was a study room where events could be hosted,” Lynch said. “It’s unfair to market our school as something that it isn’t, and it’s about time that we have a louder voice and they start listening to us because we need to adapt to this change.”

Lynch looks forward to being the student body president because he feels like he is the leader in the organization that everyone can look up to and respect, and he plans on advocating for all of the students starting in the fall 2017 semester.

“Get ready Quinnipiac, you made a great choice,” Lynch said. “Even if you did not vote for me, I promise you, you’re going to see a lot of change next year, and I’m not just saying that. I have long lasting solutions to these huge issues on campus, and you’re going to see tangible results very soon.”