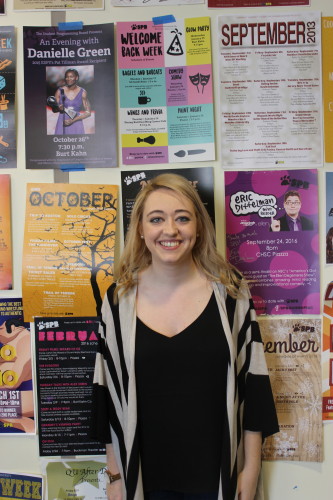 Fall Fest, Wake the Giant and all other weekend events sprinkled in between are just some of what brings students together and makes campus feel like home.

Although the amount of events going on around campus each week can seem overwhelming, let’s not forget the students who work behind-the-scenes to make it all happen.

Kelly Ledwith, senior broadcast journalism major from Old Saybrook, Connecticut, is one of those students.

Ledwith currently serves as the president of the Student Programming Board (SPB), the minds behind many of the student programs that occur on campus.

She joined SPB her first semester at Quinnipiac, not initially interested in taking on a leadership role such as president, but simply because she sparked a connection with the organization during the Involvement Fair.

“I remember at the Involvement Fair someone handing me a granola bar, and the granola bar had the meeting and stuff on it,” Ledwith said. “Then, the next week, a bunch of people on my floor and my dorm were going to the meeting, so I decided to go, and I’ve been a part of it ever since.”

She fell in love with the organization and from then on, progressed in her involvement.

She served as arts and entertainment chair her sophomore year, working with agents on booking performances. Last year, she held the position of vice president, running weekly meetings and learning from the president’s responsibilities, which she has since then taken over.

Ledwith’s day-to-day operations include overseeing her executive board, the organization as a whole and serving as a liaison between her staff and the school administration. She manages the program’s budget and generally makes sure everything is operating smoothly.

But her duties don’t start days after she moves onto campus. Ledwith began preparations for this year’s SPB events over the summer. She and her team worked on booking spaces for the events and planning leadership trainings for the other board members.

“I would say it is very time-consuming,” Ledwith said. “I spend a majority of my time in the (SPB) suite. There are a lot of meetings, and it’s a lot of going through emails and making sure stuff is being done. It’s just nice to be accessible to people, and if people have a question, then I’m here to answer it versus needing to be tracked down and finding the time to meet with people.”

She does all this while also holding a position on the school’s TV station, Q30, having a job on campus and being a full time student.

“Kelly is a great SPB president,” Zygmunt said. “Serving as president this year, Kelly has le d the organization by example. She works hard to make sure that SPB as a whole is successful and that all members, whether executive board or general board, enjoys their time on the Student Programming Board.”

One of her biggest struggles as SBP president isn’t the time she puts in but the resources she’s given by the university.

“Programming spaces in general have been very frustrating,” Ledwith said.

Many organizations on-campus use room 225 in the Carl Hansen Student Center to hold general board meetings. The room, large enough to accommodate everyone on their general board, is being taken away next semester, forcing Ledwith and her team to work around it.

“There’s lack of programming space with there still being a requirement to do the same amount of programming,” Ledwith said. “We can work around it, and we obviously have a great relationship with Facilities, so we will make it work, but I think in the future it’s gonna become a huge issue for us.”

Facilities works closely with SPB, helping them set up their spaces, and the organization also receives help from Quinnipiac’s Student Government Association (SGA).

“Right now, we have a very good relationship with SGA,” Ledwith said. “As of two years ago, we were a subcommittee of them, so since we separated, it’s been very beneficial for both organizations.”

SPB gets its money from the student programming fees students pay in their tuition. They work closely with SGA in settling financial complications with the university.

“Recently, we had a change in our financial policy that allows our concert fee to keep the ticket money because originally our ticket money went back to the school, which was frustrating especially for us as students who are paying money for the concert, so why isn’t that money going back to the concerts,” Ledwith said.

However, with recent strides in budget changes, the organization is still facing setbacks. Next semester, the student programing fee will face major cuts that will directly affect Ledwith’s organization.

“Obviously, that big budget cut is going to be a problem not only for the other organizations but also for us, because 150K is being taken away from all the organizations,” Ledwith said. “That’s going to affect our smaller events and also our concert.”

Ledwith is hopeful that through their relationship with the SGA, SPB can figure out a solution for next year’s changes.

The work that she does with her staff has always been with the intention of providing fun and free entertainment for her fellow Bobcats, and she isn’t too concerned with any of that changing in the future.

“Students know who we are and see what we do but I don’t think they understand really the impact it has on the overall campus,” Ledwith said.

Not every school can say that they have something available for students to do almost every weekend.

“Some universities don’t have that, and I know some people if they go abroad and go to another school for a semester, they come back and realize what it was like to be on a campus that doesn’t offer as much as Quinnipiac does,” Ledwith said.

The SPB’s events are often free and are always open to all students. They provide a place to go on the weekends for students who choose not to go off-campus.

“I think people are just so used to having us there that they don’t realize the impact we have,” Ledwith said. “Especially if you’re a freshman trying to meet people and all the leadership opportunities if you want to be involved in something like this or even just going to an event on a Saturday night.”

She wishes the community would connect more with what they do and take advantage of these events.