Where is your money really going? 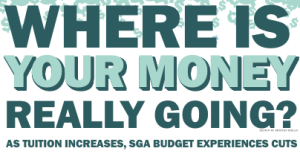 Overall tuition for students is increasing and some student organizations budgets are getting cut.

The overall tuition for returning resident students in the 2017-2018 academic year will increase to $64,540. That number includes everything from tuition, housing, technology fees and transportation fees.

The big question is if tuition is increasing for students and student organizations budgets are being cut, then where is all of this excess money going?

Mark Varholak, vice president of finance and Monique Drucker, vp and dean of students, confirmed that the excess money is going towards student services. That includes funds for the Health Center and Athletics.

Former SGA VP of Finance George Corde believes that as Quinnipiac’s student population grows, student services also need to expand. The Health Center also needs to have an appropriate budget to hire more staff and Athletics needs to be able to fund more intramural teams, according to Corde.

In student tuition for next year, the student fee will be $1,680, according to the Quinnipiac University website.

Next year, with roughly 7,000 undergraduate students, this will equate to over $11.75 million dollars in revenue for the university.

SGA sent out an email to all undergraduate students explaining the situation and what it means for programming.

“This revenue is supposed to be invested directly back into the students through programming, student services, and other on and off campus amenities you have access to,” the email stated.

T he amount of money student services needs to keep everything running is a lot more than the estimated student fee that is located on the Quinnipiac website, according to Corde.

“So why even have the student fee, it’s a little deceiving,” he said. “It does not make sense to have that number on the website. It’s not an accurate portrayal of the actual amount of money  (the school) is spending on the student experience.”

SGA’s budget right now is $600,000. The organization had a deal with Monique Drucker, dean of student affairs, where she would cover SGA up to $750,000. Student affairs cut SGA’s budget to $600,000 after SGA had already allocated $750,000 of their money this past year because they didn’t realize their budget would be cut.

For next year, SGA will have $600,000 to distribute to all on campus organizations that receive a budget, but they will not be allowed to go over that amount.

The email said that SGA allocates their budget to a majority of on campus student organizations which are increasing in size and quantity each year. 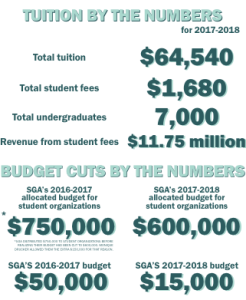 “For the 2017-2018 academic year, a fifth of that money will be cut, which will impact almost every opportunity you have across campus, from the Student Programming Board (SPB), to QTHON, to The Big Event, and approximately 70 other budgeted organizations,” the email said.

Corde said that every single organization will be affected by the budget cuts.

According to Corde, SGA came to that conclusion because SPB had 15 different committees within the org. These committees include the cinema and the mainstage crew. SGA took $1,000 from each committee.

“A cut of $1,000 won’t deter them from having another Tiesto type concert,” Corde said.

SGA will vote to approve the new budgets today, April 12.

“Not only did we cut all other organizations, but SGA took the biggest cut of them all,” Corde said.

Corde thinks it is important for students to know where their money is going.

“I just think it’s important because all students pay to come to this school. We pay to get a service, we are like the customers. When we asked to know what we are paying for exactly, it’s important for us to be able to get a breakdown. Everyone wants to know where their money is going.”