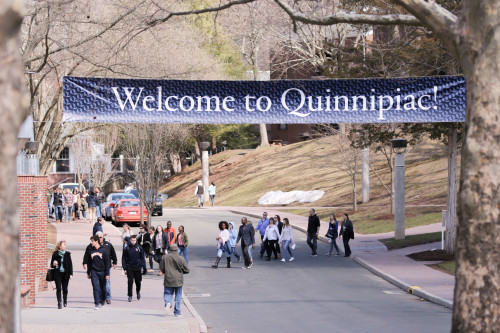 Quinnipiac is the most successful of all of our peer institutions in terms of social media, according to Associate Director of Social Media and Quinnipiac alum Jamie DeLoma. 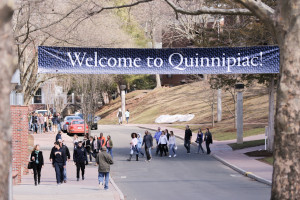 As the university grows and expands, DeLoma works to ensure that the story of the university that is told online is an accurate representation of what it means to be a Bobcat.

“The university has several core values, and the way that we’re pontificating and showcasing those is through the involvement of our students,” DeLoma said. “Instead of talking about students’ involvement and the 140-plus student clubs and organizations, we talk about the students who are involved in a handful of those organizations to showcase the strengths of the university through the individuals.”

Every person who passes through Quinnipiac has a story to tell, and it is DeLoma’s job to tell these stories.

“On any given day, I have an idea of what story I want to tell, but I never know how the day is going to end,” DeLoma said.

“More people are engaging in Quinnipiac than they are in any other school that we are directly competing with, and we’re growing faster,” DeLoma said.

While social media provides direct contact with prospective students, current students and alumni, it is also a risk, according to DeLoma.

“It’s awesome because we are able to authenticate our brand and our narrative through the stories we tell,” DeLoma said. “But, if we lie about (our brand) or we don’t tell the story, we will be called out on it immediately.”

Quinnipiac Class of 2013 alum Anna Brundage worked as a graduate assistant (GA) for social media and marketing on campus.

Since leaving Quinnipiac, Brundage is amazed by how much the university has changed. While she is no longer a student, Brundage keeps up with the changes happening on campus via the university’s social media platforms.

“Following the social media channels and witnessing the successes of the students and the university is incredibly rewarding as an alumnus,” Brundage said.

In terms of the future of Quinnipiac’s branding, DeLoma believes that the university will be improving and reaching out to students even more.

“In the future we are going to be expanding to offer more news and information to the individual schools on a customized level,” DeLoma said. “We’re having conversations about having more feeds directly to the students from across the university. So when you’re just walking through the hallway you’ll be able to see what’s happening now.”

As the university continues to go through changes with its brand and its use of social media, they continue to stay connected with prospective students, current students and alumni while leaving a lasting impression.

“It’s bittersweet knowing that the next time I see campus, it won’t be the same,” Brundage said. “I think that, more than anything, reminds me that time is passing from when I was a student. Some of places my friends and I studied and hung out, aren’t there anymore, but it’s also a nice sentiment, thinking that other students will have their owning meaningful experiences in those places.”