The ‘Belle’ of the box office 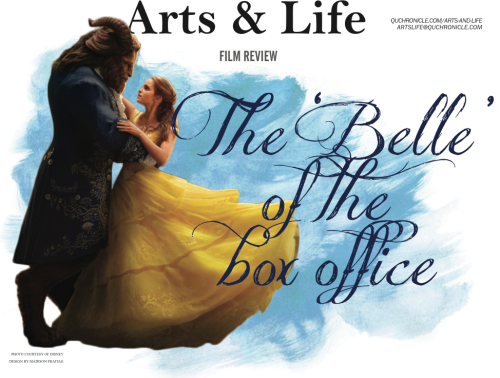 In this tale as old as time, Disney brought new meaning to the words “love story.”

Breathtaking. That’s one word that comes to mind when many think of the 2017 live action adaptation of Disney’s classic “Beauty and the Beast.” The star-studded cast, from the likes of Emma Thompson and Ian McKellen, say they jumped at the chance to bring this 300-year-old fairytale back to life.

“It reintroduced the form to a new audience through animation, but you always knew that it wanted to be more,” Bill Condon, the movie director told ABC.

After the releases of “Maleficent,” “The Jungle Book” and “Cinderella” in 2015, millions became enraptured with the live-action remakes Disney has been producing of its beloved classics. A whole generation of people have the opportunity to fall in love all over again with the classics they we were enchanted by as children. One of these children just happened to be Emma Watson, who plays Belle in the box office phenomenon.

The 26-year-old actress brings so much more than her beauty to the screen. We all fell in love with Belle, the romantic dreamer of a heroine who gets lost in books and yearns to escape her provincial life. But this version introduced us to a new Belle, one more cunning, clever, witty and in charge of her own destiny.

Most already know Watson from her role of Hermione Granger in the film adaptations of the “Harry Potter” series. One can’t help but notice the similarities between the two characters who are both bookish and feisty.

Belle is also much more innovative in this version. She teaches children to read and uses her inventions to get the tasks done. She’s a princess who cares more about brains than beauty, making her a role model for young girls everywhere.

Viewers’ eyes welled up with tears when Watson stepped out on the ballroom floor in that beautiful, iconic yellow dress. It was almost the penultimate moment, what everyone had been anticipating from the beginning.

Despite audiences knowing this timeless love story, the director and composer Alan Menken still had some surprises up their sleeves. Some new songs were added that the original didn’t include. And the one’s everyone did know, such as “Be Our Guest,” were back and better than ever. The latest in technology made for some astounding graphics.

The Oscar-winning song “Beauty and the Beast” made famous by Celine Dion is refreshed by the smooth vocals of Ariana Grande and John Legend.

Another change was the addition of backstory regarding Belle’s mother. This ultimately provided more color and a level of reality audiences will appreciate.

In addition to this modern day retelling, the adaptation was the first Disney film to have feature an openly gay character. The character of Le Fou, portrayed by the brilliantly hilarious Josh Gad, who many know for being the voice of Olaf in “Frozen,” has mixed feelings for his best pal Gaston.

Condon was asked about his decision to feature a sexuality different than Disney audiences are used to.

“It’s about accepting people for who they really are,” Condon said.

This film is one that preaches acceptance, for ourselves and for others.

“On the screen we’ll see everybody.”

Despite millions of fans, the film had several critics. Some disapprove of a love story that begins with a woman being held prisoner. There are a few theories that Belle even develops Stockholm syndrome, or feelings of sympathy or affection from a victim towards a captor in cases of hostage-taking.

How did the cast respond to this? In an interview with Entertainment Weekly, Watson argued that Belle isn’t a victim of Stockholm syndrome because she never gives up her own agenda during her imprisonment. Belle never loses her freedom of thought or lets the Beast truly gain power over her.

“He bangs on the door, she bangs back. There’s this defiance that, ‘You think I’m going to come and eat dinner with you and I’m your prisoner—absolutely not,’” Watson said.

No matter how modern audiences interpret this fresh version of an age-old tale, what endures is the love story.

“It’s so hopeful, and it’s so full of joy, and it’s kind of so defiant in that,” Watson said.

“Beauty and the Beast” remains just as enchanting as ever. And audiences are eternally grateful.