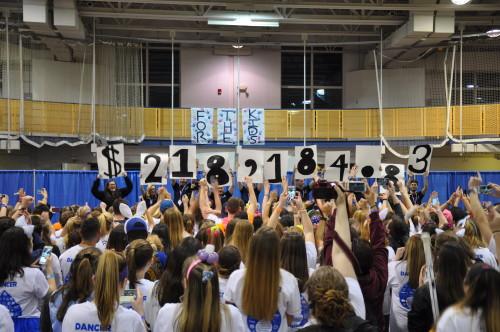 Quinnipiac University’s QTHON raised $218,184.83 this year as a part of the Miracle Network Dance Marathon for children’s hospitals around the United States.

On Saturday, March 25, the QTHON executive board and all the organization’s committees worked all year long to put on the ten-hour event during which people danced, visited with “Miracle Children” and fundraised for the Connecticut Children’s Medical Center.

Members of the Quinnipiac community could sign up individually or in groups of dancers. Each dancer became responsible for achieving a personal fundraising goal.

Sports teams, Greek organizations and clubs such as Gamma Phi Beta, Women’s Soccer, IceCats and nursing students made teams, which were then able to sponsor a “Miracle Child,” or a child who has benefited from the money raised, during the event.

“To be honest, I am still trying to pull together my thoughts and feelings from the event. Throughout the entirety of the night, I felt like I was on cloud nine watching all the success that the management team had made in the 11 months of planning,” Diaz said. “I found myself just standing on the stage alone for five minutes staring out into the crowd to absorb all the success that accumulated from a year’s worth of hard work.”

At 2 p.m., dancers and QTHON committee members stood up for the last time and pledged to stay standing until 12:01 a.m. During the event, dancers and observers learned the “morale dance,” did fun activities such as face painting and visited with the children who benefited from the event and their families.

Stephanie Shaw, a junior occupational therapy major, and Marisa Casciano, a senior journalism major, were both a part of the “MORALE” committee. The MORALE committee is responsible for keeping spirits high, encouraging dancers and dancing the night away themselves during the event.

“As a MORALE committee member, the major expectation of us was to be our energetic and enthusiastic selves before, during and after the event,” Shaw said. “We are the heart of the energy that floods the room the night of, so it is up to us to make sure everyone feels that energy throughout the day.”

Similarly to everyone involved in QTHON, Marisa Casciano is passionate about the event and being more involved as a MORALE member.

“I could talk about my passion for QTHON for days,” she said. “But simply put, I decided to fill out an application for MORALE because I loved seeing their passion and energy for the event every year. Dressing up and getting crazy over something you love reminded me of when I was a camp counselor, and I wanted to be a part of a group of people like that and get more connected to the QTHON event. I’m just happy they chose me, too.”

Alex Laren, director of operations on the QTHON executive board, was thrilled with the event and all the people that came out to support and fundraise for such a great cause.

Larsen admits that though she had great anticipation for the event, it turned out to be a great success and quite bittersweet for her as it was her last QTHON before graduation.

“As director of operations, it is my job to bring the entire management team’s efforts and plans together and plan out how the entire morning, day, and night is going to go,” Larsen said. “We had a timeline that was mapped out hour-by-hour in five-minute increments with rows and columns that would make your head spin.”

Larsen says that the executive board’s ability to work so well together contributed to the event’s success this year.

“I thought I was going to get there and be incredibly stressed. Overall though, I wasn’t. But I don’t take full credit for that. Yes, we as a management team had some moments and behind the scenes obstacles to overcome, but because this team was so cohesive and passionate and dedicated, anything that happened we were able to iron out quickly.”

Larsen, along with the other executive board members, were in shock when the event surpassed its goal of $150,000 by $68,000. She believed that some members of the community did not think they would be able to achieve such a great success.

“The fact that we raised 68K more than our goal is incredibly surreal, to say the least,” Larsen said. “We as a management team find out before everyone else as a group with our advisors, and we were all either crying hysterically or had our jaws on the floor in shock and utter happiness.”

Not only was the amount raised a huge success for the QTHON executive board and everyone involved in the event, but it means big things for next year’s event.

“We set our huge goals and announce them almost half a year before the event because we really are trying to instill the Dance Marathon motto of being ‘FTK’ (‘For The Kids’) all year round,” Larsen said. “These hospitals and these families need events like this, and they really do notice the year round efforts that schools do to raise this money. Thankfully, I believe the movement is catching on here at Quinnipiac.”

During the opening ceremonies, the executive board asked the children sponsored by the event what their favorite part of QTHON is so it’s only fair to ask them the same thing.

“This is a tough one. I think my favorite part of QTHON would be the constant smiles that I get to see on the kids and their families faces for the ten hours they are with us,” Diaz said.

Larsen however was torn between the morale dance performed every hour on the hour or the final reveal at the end of the night.

“Not only is it just so much fun to be up there dancing, but it’s really cool to look out at the crowd all doing that dance smiling and laughing together….For obvious reasons I love the final reveal….Having the opportunity as a management team member to be up on stage holding one of the pieces of poster board for reveal was incredible – I never thought one of the best moments of my life would come from holding a piece of paper” Larsen said.

Shaw, a part of the MORALE team, couldn’t seem to choose just one part of QTHON as her favorite.

“I can honestly say there is not a single part of this event that I don’t like,” Shaw said. “There is something for everyone no matter what you enjoy to do there and it is so much fun. Picking one thing is way too hard when you love it all.”

And finally, the irony of this question was not lost on Casciano, who decided to go back to how the kids answered the question originally.

“Molly Arneth asked a couple of the kids that question when she introduced them during opening ceremonies. A couple kids said ‘everything’. And although it may sound broad, I think they were right on,” Casciano said.

The first QTHON event, hosted five years ago, raised $14,000 according to Larsen, compared to this year when the movement raised over $218,000. Larsen believes this number has made it very clear to everyone in the Quinnipiac community that the movement that is QTHON is getting stronger and is here to stay.