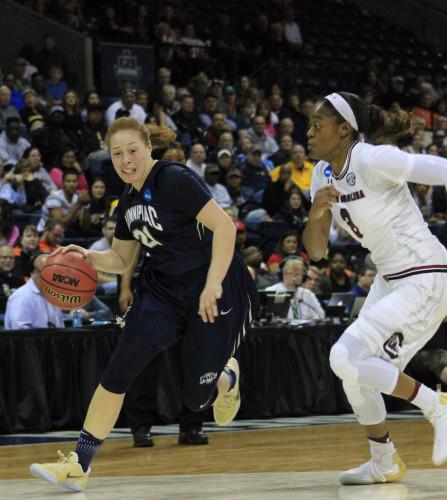 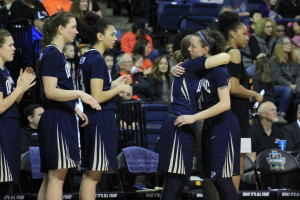 The No. 12 seed Quinnipiac women’s basketball team that was the center of the college basketball world for the past week saw its Cinderella dreams come to a close pretty early in Saturday afternoon’s Sweet 16 matchup.

The No. 1 seed South Carolina Gamecocks started off on a 16-0 run which the Bobcats were never able to recover from, losing 100-58 and ending their season.

The Bobcats couldn’t get anything going offensively in the first seven minutes of the game until redshirt sophomore forward Jen Fay hit a pair of free throws to put the Bobcats on the board. The Bobcats also got points from junior forward Sarah Shewan and Fay before the quarter closed, but the Gamecocks held a 22-7 lead going into the second.

“We were not as calm as we had been,” Bobcats head coach Tricia Fabbri said. “And then when a couple of our shots, where the right shot didn’t go in, we were trying to play too quickly instead of calmly. And I think that was obviously due because of South Carolina. Jen [Fay] said it- their size, speed and length was disruptive to us.” 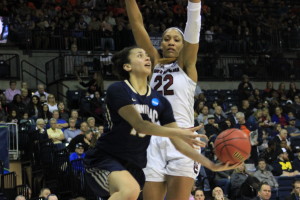 Although the Gamecocks only shot 6-15 (40 percent) from the field in the first quarter, they outrebounded the Bobcats, 16-5, and were 9-9 from the free throw line.

The Bobcats were able to get their offense going in the second quarter, scoring 20 points and shooting 8-11 (72.7 percent) from the field.

“[The players] were saying it to themselves: One possession, let’s defend, let’s get after it,” Fabbri said. “We took good care of the basketball. Let’s just settle down and set screens.”

“They shot lights out,” senior guard Adily Martucci said. “Our game plan was to really try to help off of our players to help our bigs with Wilson. And something’s got to give when that happens. Those threes really were daggers. I felt like they shot 100 percent from the three-point line. It felt like that. They shot very well.”

The Bobcats came back out for the second half trailing 45-27, hoping to build from the offensive momentum in the second quarter. But the Gamecocks would get off to another hot start, going on a 25-9 run in the first 7:12 of the half. 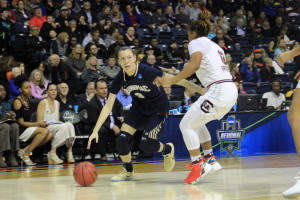 “I thought our players came out ready to play on both sides of the ball,” South Carolina head coach Dawn Staley said. “It was a really exciting game for us, and we were really up for the challenge of playing Quinnipiac, and I’m glad we get a chance to move on.”

The Gamecocks ended up shooting 22-29 (75.9 percent) from the floor in the second half, led by junior guard Kaela Davis, who had 28 points to lead all scorers.

“Get my feet set, just making sure, kind of staying in rhythm,” Davis said. “ I think it’s just like I said, just finding rhythm and staying in a rhythm.”

Fay and Martucci led the Bobcats in points with 12 apiece. Sophomore forward Aryn McClure dished out six assists to go along with her nine points.

Although it was clear by the fourth quarter that the Bobcats were going to lose, the memorable moments of the game came in the closing minutes when Fabbri subbed out seniors Morgan Manz and Martucci. Both players were greeted with hugs from Fabbri and the bench as well as a standing ovation from the Bobcat

Martucci teared when recalling her time at Quinnipiac.

“Indescribable. Life changing. The best years of my life,” Martucci said. “I’m just so proud to be a Bobcat and to be a part of this family. It’s really hard to describe my five years here because it’s been so amazing, and just the growth that I’ve witnessed with our program and within myself. It’s life changing.” 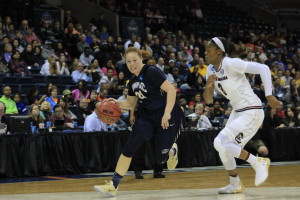 With the season now over, the Bobcats can now look back and appreciate what they accomplished this season.

“We put our school on the map,” Fay said. “Not only do people know how to pronounce our school now, but they also know who we are and what we stand for and what we’re all about. I think that’s the biggest thing is that we left our mark.”

Fabbri believes that the program is still on the rise.

“We clearly know where we stand. We clearly now have our next steps in the program and where we go now, another route and strategy, is being hatched,” Fabbri said. “Now everyone in women’s basketball has paid attention to our story, and we plan to use that. Now getting a taste of the Sweet 16, being here the second weekend will now be a part of what we want to continue to build upon for this program going forward.”