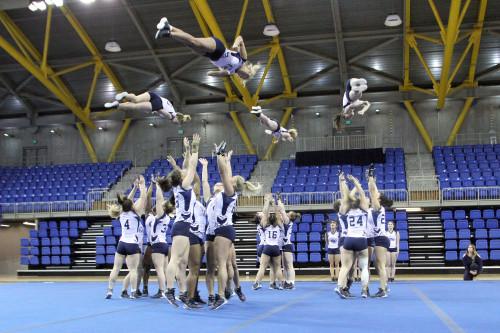 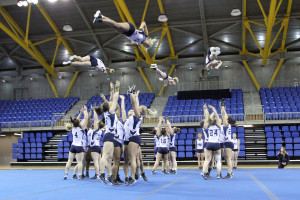 The No. 3 Quinnipiac acrobatics and tumbling team beat Glenville State by a commanding 280.435 – 237.550 score on Saturday afternoon at the TD Bank Sports Center. As a result of the win, the Bobcats break .500 in the standings with a 3-2 record while Glenville falls to 3-2.

“They made a conscious decision that they want to bring a lot more energy every time they go, and what’s neat is I watch the confidence building every single time we go out there,” Powers said. “We’re at a good place in the season.”

The Bobcats’ confidence was on display through the first event of the day, the Compulsory event. Quinnipiac took an early 37.15 – 29.95 lead in that event after near perfect scores in two of the four heats (9.95 in toss and 9.8 in pyramid).

Next up, Quinnipiac continued its impressive effort by scoring 29.60 of a possible 30 points in the Acro event. Behind a 9.90 score in the second heat and matching 9.85 scores in heats one and three, the Bobcats prevailed despite Glenville’s ability to tally 27.35 points.

After the half, Quinnipiac carried an 11.65-point lead going into the Toss event.

In the Toss, the Bobcats continued their near perfection by scoring 29.40 points to Glenville’s 26.30 points. The Bobcats scored a 9.90 in the third heat for its best heat of the event.

While the score was close throughout the entire meet, the six-element Tumbling event was where Quinnipiac took control and ceased to look back. Highlighted by senior Kelsey Rule and sophomore Jenna Capristo’s 9.55 Duo Pass heat effort, the Bobcats won the Tumbling event 54.525 – 46.25, before the final Team event. 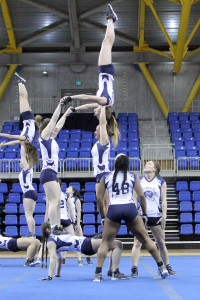 In the final event of the meet, Quinnipiac looked to complete its second straight, six-event sweep in as many contests. Luckily for the Bobcats, they posted their second-best Team event score of the season, beating Glenville 100.60 – 79.95.

The Bobcats’ Team event’s score is a big improvement since their first attempt at home against Oregon (92.97), but Powers knows that the attention to detail is what will pay off in the long run.

“I think the way we’re gonna prepare for it is really look at the little things,” Powers said. “It’s those little things that are adding up to some points that we need to chip away at, so I think the next two weeks are really gonna be spent on working on the small things that affect the big picture.”

Quinnipiac’s next meet comes next Saturday, when the Bobcats face Fairmont State at home on senior day. While the Bobcats’ success can be credited to its complete team effort, Powers and her squad will be watching a different Quinnipiac team for further inspiration.

“We are going to be watching a great women’s basketball team this afternoon in the Sweet 16 and what I see from that team is great chemistry, its poise, its perseverance and its passion,” Powers said. “I feel like we have two out of the three and we have to work a little bit more…But just take a team that’s at our own university, use them as a role model and just build as the season moves on.”