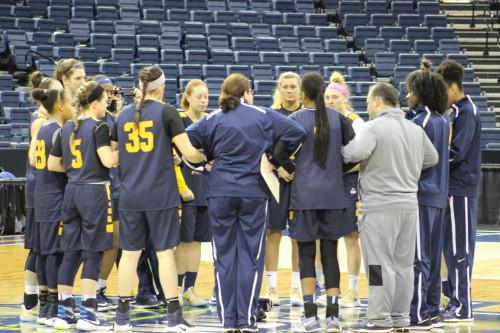 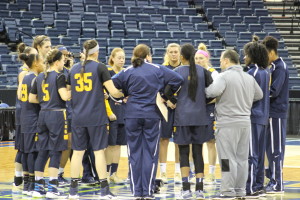 The Quinnipiac women’s basketball team (29-6) will once again play its biggest game in program history when it faces the South Carolina Gamecocks (29-4) in the Sweet 16 on Saturday in Stockton, California.

“At some point, you watch the Sweet 16 on TV, and you dream that one day you’re playing that game in this tournament,” Bobcats head coach Tricia Fabbri said. “I know that certainly was my dream a long time ago, and for that dream to become a reality, and… to be playing in the Sweet 16, we’re really excited to be here. We’re really excited with the opportunity to play against South Carolina.”

The Gamecocks are the No. 1 seed in the Stockton region, winning the Southeastern Conference regular season and tournament titles. They blew by No. 16 seed University of North Carolina Asheville in their first round game, winning 90-40. However, the Gamecocks were tested in their second round game against No. 8 seed Arizona State, but won 71-68.

“We’re excited to be in Stockton,” South Carolina head coach Dawn Staley said. “We’re pretty excited about the challenges that we’ve faced within this region. We play a tough Quinnipiac basketball team that we’ve been preparing for for the past couple of days, and hopefully that will pay off tomorrow afternoon.”

The Gamecocks will be missing All-SEC First Team senior center Alaina Coates after she re-injured her ankle in the SEC Tournament. Coates was averaging 12.9 points points and 10.7 rebounds per game before the injury.

Junior forward A’Ja Wilson is the star player for the Gamecocks, as she is a Naismith Trophy Finalist and won the SEC Player of the Year. Wilson won’t be sleeping on the Bobcats, especially after last year when South Carolina was a No. 1 seed and lost in the Sweet 16. 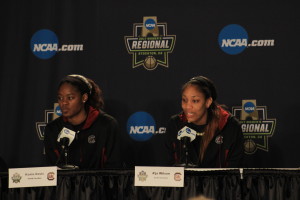 “We really can’t overlook the fact that they are a great team,” Wilson said. “They are very fundamentally sound and well coached. We are going to go out and stick with our game plan and understand that we can’t take any slack off. We just have to continue to do us.”

Wilson was also named to espnW’s All-America First Team and averages 17.7 points per game to go along with 7.7 rebounds per game. She was the second-leading scorer in the SEC this season and led the conference in blocked shots with 2.5 blocks per game.

“We just coach and they bring us along for the ride,” Staley said on her players. “They are committed to winning, and when you have that kind of winning culture, obviously the winning is part of it, but the culture is the other part of it.”

Junior guard Kaela Davis, who had 20 points in the Gamecocks’ win against Arizona State, shares the same thoughts as Wilson.

“Obviously the team that we’re playing, you can’t take them lightly, at all,” Davis said. “Obviously they are here for a reason and they have earned every single bit of that. The number next to their name, it means nothing, honestly…we have to come out and be ready to play.”

Junior guard Allisha Gray is expected to play on Saturday after being carried off the court with a hamstring injury in the Gamecocks second round win on Sunday. Gray is averaging 12.8 points per game, third best on her team.

“And really what’s most impressive to the staff, as we’ve prepared, as we continue to prepare our team, is really how they defend,” Fabbri said. “I think they are a really outstanding defensive ballclub. So we have our hands full all day tomorrow.”

Redshirt-sophomore forward Jen Fay, who leads the Bobcats in points per game with 10.4, has confidence in a Bobcat victory on Saturday.

“I mean, I think coming off of obviously two huge wins, is going to make us more confident than ever,” Fay said. “And we know this game is probably going to be even harder than the first two. But there’s no doubt in our mind that we can pull off another upset.” 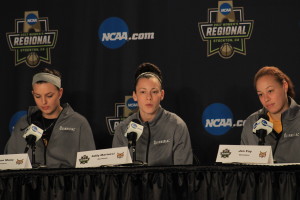 “Every game you build more and more confidence after every win,” Manz said. “This opportunity, it’s amazing. I really can’t put it into words because it’s just unreal.”

The Bobcats have been the buzz in women’s basketball since their win on Monday night, and Fabbri believes her players are focused with all of the noise surrounding them.

“To be here and still have business on hand, it’s very grounding, and they are task-oriented and a goal-oriented group in doing it together,” Fabbri said. “They are enjoying the moment, but they are very much about taking care of business and the business trip at hand and being able to stay focused at the task at hand.”

The Bobcats received some love on Friday from UConn Huskies women’s basketball coach Geno Auriemma, who wore a Quinnipiac t-shirt to his press conference on Friday.

“I’m just glad they’re not in our bracket and not in their bracket, because I’ll tell you what, I wouldn’t want to be in their bracket,” Auriemma said. “And Trish (Fabbri), that potty-mouth coach of theirs, if I ever said some of the stuff that she said, I’d get crucified. I told her that, too. Catholic school girl like herself? She should be ashamed of herself.”

Fabbri was thankful for the love from Auriemma.

“Geno has been such a mentor for me going way back,” Fabbri said. “He helped me in this process, get a job at Quinnipiac a long, long time ago, 22 years ago…The fact that he is wearing our shirt in support off our team in this tournament at this time, just so thankful, and very grateful.”

Fifth-year senior guard and captain Adily Martucci, who has made clutch plays at the end of each tournament game to secure a Bobcat win, believes the success of the Bobcat program is all because of Fabbri.

“You know, our success starts from the top and trickles its way down, and she is the head of this team,” Martucci said. “And I look up to her as a role model for a leader. And it all starts with her to be honest, and, you know, she’s one of my biggest models.”

Martucci made the All-MAAC second team, is second on the team in points with 10.3 points per game. She is also considered to be one of the top defenders in the conference. Sophomore forward Aryn McClure was the only other Bobcat to receive All-MAAC honors as she made the All-MAAC third team.

Tip-off between the Bobcats and Gamecocks will be at 4:06 p.m. ET with a chance to play in the Elite Eight on Monday night at stake.