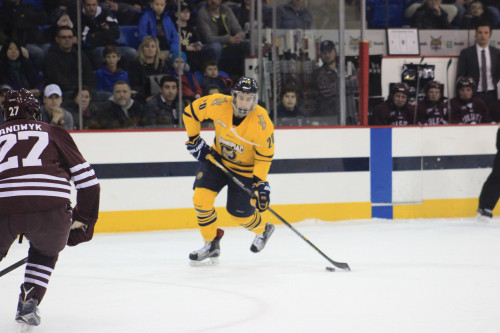 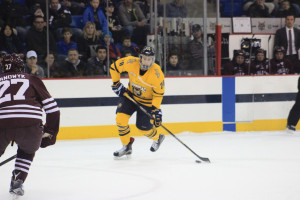 The hard-nosed effort began just 16 seconds into the game on a dump-and-chase play. After senior assistant captain Tim Clifton dumped the puck in deep, Martin found it in the corner and dished it to Whelan. The freshman then took a few strides closer to the net, turned around and fired a wrist shot over the shoulder of Saints goalie Kyle Hayton.

“He’s a really good goaltender,” Martin said. “We’ve gotta get traffic for sure, guys going to the net and pucks to the net.”

While Quinnipiac continued to pressure Hayton and the St. Lawrence defense, it drew a penalty for too many men on the ice to put the Bobcats on the power play under seven minutes later.

Unfortunately for the Bobcats, an errant pass from junior Kevin Duane to senior captain Derek Smith caused a 2-on-0 break for the Saints. While Shortridge stopped the first shot on the 2-on-0, Saints leading goal scorer Mike Marnell followed up on the rebound and made no mistake putting it past a helpless Shortridge to tie the game at 1-1.

The initial breakaway stop was one of many Shortridge faced in the opening moments of play, but his composure kept the Bobcats in the game.

After drawing a hooking penalty just under two minutes later, sophomore Chase Priskie carried the puck into the slot on the power play, was hooked on the play but still managed to find an open Martin, who rifled home his first of the ECAC Hockey playoffs and a go-ahead goal going into the next frame.

In the second period, Quinnipiac refused to let its guard down, drawing two penalties early, then a cross-check midway through the second.

While the Bobcats were unable to convert on both power plays, it was Martin who scored his second of the night and the eventual game-winner at even strength. On the play, Whelan showed off his speed along the right half wall, tried to wrap the puck around, but instead found Martin, who banged it home.

In his eighth ECAC Hockey playoff game, this was Martin’s second game-winning goal, the first one coming last season against Dartmouth in the semifinals.

“I guess I just like going to the net,” Martin said with a chuckle. “I got a couple of fortunate bounces, guys are making good plays and I’m just capable of burying those ones.”

Quinnipiac came into this game with a record of 20-1-0 when leading after two periods this season and 60-1-3 over the last three seasons. The team’s ability to close out games has been historically impressive. However, trying to do so against St. Lawrence on the road was no easy task.

The Bobcats successfully killed off two penalties in the opening half of the period, but chaos ensued in the last five minutes of regulation play.

A St. Lawrence forward shot the puck on the net, causing a scrum in front. Shortridge was bowled over into the net and sophomore forward Scott Davidson took a roughing penalty, but somehow the puck squeaked loose onto forward Michael Ederer’s stick, who found twine to bring the Saints within one goal.

Similar to the way Quinnipiac pressured St. Lawrence in Friday night’s game, the tables turned on the Bobcats tonight as the Saints brought the kitchen sink in the last few minutes of play.

With 22 seconds left, a faceoff in the Bobcats’ zone would determine whether Quinnipiac would force a Game 3 or if St. Lawrence would send the game into overtime.

Tim Clifton won a pivotal faceoff forward to alleviate pressure in the offensive zone, but the Saints marched back into the zone. Shortridge made one final pad save — his 32nd of the night — to solidify the win and send the Bobcats into Game 3 of the series.

The decisive Game 3 will commence tomorrow night at 7 p.m. at Appleton Arena. The winner will move along in the ECAC Hockey Tournament and head to Lake Placid, New York next weekend, where competing consistently will be crucial.

“I thought we played pretty close to 60 (minutes) from a compete level,” Pecknold said. “It wasn’t perfect. We certainly knew we made mistakes, and we talk about it as a team a lot. Mistakes are going to happen, but if our compete levels are off the charts, you’re gonna bail your teammates out, and that’s what we did tonight.”