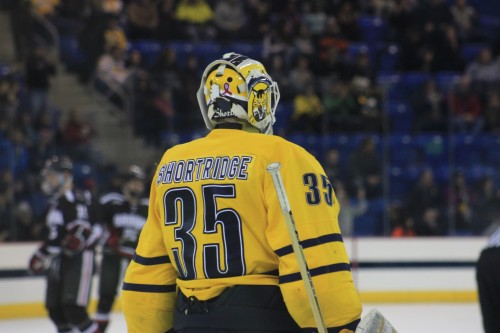 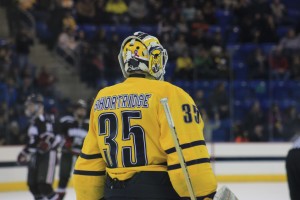 The Quinnipiac men’s ice hockey team knew coming into the year that there would be some big holes to fill after an unforgettable 34-4-2 season in which it won itself an ECAC Championship, regular-season title and earned a National Championship appearance. The largest hole being the backbone behind this incredible feat was three-year starting goaltender and Hobey Baker finalist Michael Garteig.

When all was said and done, Garteig graduated and moved on from his illustrious collegiate career to a professional contract with the Vancouver Canucks organization, and with that, he left a lingering question mark in the crease of High Point Solutions Arena.

No one would have guessed that one year later, the Bobcats would be taking a shot at a similar run with a freshman leading the way.

Grabbing a tight grip on the spotlight this year has been freshman Andrew Shortridge, a 6-foot-3 Alaskan native, with glowing confidence and gargantuan shoes to fill.

“Obviously as a program, you have expectations,” Shortridge said. “You want to repeat and you want to improve, but for me I’ve said it all year in that I just wanted to be a part of this however I could and chip in where I can.”

Shortridge currently holds an 11-5-0 record in 16 starts along with an ECAC-leading 2.03 goals against average and a .920 save percentage, which is fourth in the league. He is also currently leading the team to a five-game win streak that includes a tight 3-2 victory over Yale on Feb. 24 and an impressive first-round playoff sweep of Brown in which he only surrendered two goals in as many games this past weekend.

“I need to do whatever I can to help us get wins and do my job on the back end to make sure everyone else can feel more comfortable up front and do their job,” Shortridge said. “Then we can get some wins.”

Shortridge’s recent play has sparked the Bobcats up front in their offensive play by his confidence in goal influencing the rest of the team.

“He just looks real confident and he kind of projects that confidence on to our team and then we’re good to go,” Quinnipiac head coach Rand Pecknold said.

Shortridge was honored as ECAC Rookie of the Week in the final week of the regular season after the Yale victory and a 4-1 triumph against Brown. He surrendered only three goals on the weekend along with posting a .925 save percentage and was the first Bobcat to win a weekly ECAC award this season.

Whether it be a contest where the opposition generates a lot of offense or not enough, Shortridge has kept the same high focus level game-to-game in order to maintain consistency in between the pipes. 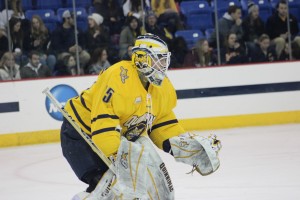 “I like to be active. Touching the puck and puck handling, that keeps me in it,” Shortridge said. “Also talking and communicating with the defense when the puck is in our end and really just focusing on the game at hand and not spacing off. Just staying right in the moment and just enjoying.”

There were many questions coming into the season regarding the Bobcats’ goaltending. Pecknold had the choice between junior Air Force transfer, Chris Truehl, or Shortridge, who was coming in fresh out of the British Columbia Hockey League (BCHL).

Truehl had priority in the first half of the season, but after a rough start on Feb. 17 at Union which saw Truehl allow three goals on six shots, Shortridge got his shot to truly take over the starting job.

When Truehl’s game hit speed bumps, Shortridge made 16 of 17 saves in relief. Since then, Shortridge has gained the rights to the net, starting the next five straight.

Before Shortridge took over, he had four starts in 21 games with a record of 2-2-0. As the season has progressed, he has made large strides in net and, in turn, he has projected a settling influence in net for the Bobcats, posting a 9-3 record since assuming the job.

“I could spend an hour talking about (Shortridge’s improvement). He’s adapted to playing at this level, to better shooters, bigger and stronger players, and there’s more bumps net-front that you gotta deal with,” Pecknold said. “I think he’s adapted really well on our penalty kill. He’s adapted on handling the puck, and I don’t think he’s had much thought of doing that in the past.”

The major adjustment for Shortridge was the transition of playing juniors for the Vernon Vipers in the BCHL to college hockey with seasoned NHL prospects.

“It’s definitely different. There are some things you can get away with in juniors that you come to this level and you can’t get away with,” Shortridge said. “You gotta learn through experience, take some setbacks and then build on that, and also day in and day out keep working to get better and make sure that you can really give yourself the best set tools and mindset to get a win every night.”

Shortridge will take his momentum up to Canton, New York on Friday as the Bobcats take on St. Lawrence in a best-of-three series in the ECAC Quarterfinals. The Bobcats were 0-1-1 against the Saints this year and Shortridge is looking to stick to his same formula in order to win a trip back to Lake Placid.

“Realistically, it’s the same games,” Shortridge said. “We just gotta keep playing the way we are playing, stick to our identity and then we can’t deviate from that.”

If Shortridge can continue his dominance, it could help the Bobcats challenge their playoff fortunes from last year in another memorable run.

“I just gotta play how I’ve been playing and do anything I can to give us the best chance to win,” Shortridge said.