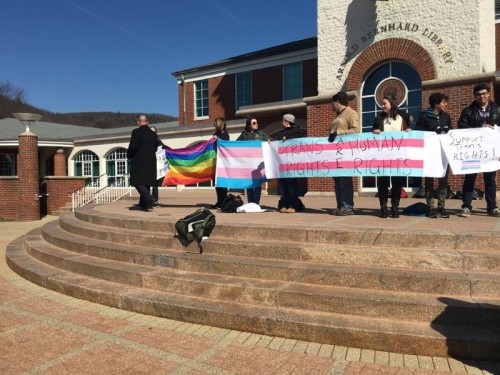 On Monday, March 6, the Gay Sexual Alliance club stood together with students and faculty during a peaceful protest on the Arnold Bernhard Library steps. The protest was in response to the removal of the executive guidance that protected transgender students against discrimination regarding bathroom use.

The removal of the guidance now allows schools to discriminate, according to the President of the Gay Straight Alliance (GSA) Alexi Mangili.

“This [protest] is basically to create awareness of what this means for transgender students… and to be respectful,” Mangili said. “The removal of bathroom rights prevents transgender people from going into public spaces. They have to plan their entire way around what bathroom can accommodate them. This protest is awareness of that.”

GSA held the protest on that particular day in response to the removal of the executive guidance, according to Mangili.

“For the longest time, because they seemed to be invisible, we don’t have anything that speaks to the transgender community,” Ariza said. “It’s like they don’t exist… they do. This is about educating and also keeping in mind that there is a national trend with the current administration that is weighing in on how to support transgender people as individuals.”

During the protest, students and faculty held signs to encourage their message that trans rights are human rights. Protesters handed out fliers that explained what bathroom rights are, why it was important and the guidance that was removed.

Sophomore public relations officer, Caroline Gottlieb participated in the peaceful protest to inform people of the problems that the transgender community is facing both locally and across the U.S.

“Everyone is equal no matter who they are or what they believe, whether it be identity or expression,” Gottlieb said. “Everyone deserves the same rights. It is more than just choosing which bathroom to use. One restriction leads to another, which leads to another.”

Senior English and theater major Theo Pinnow is a transgender student on campus and thinks the student body should be more aware of diversity on campus.

“As a transgender student I am way more for making sure the rest of campus knows we’re here,” Pinnow said. “Everyone kind of blends in, and I think being aware of our diversity is something that QU tries to do but isn’t always at 100 percent.”

Associate Professor of Journalism Margarita Diaz believes it is crucial to make transgender people feel like they are a full members of the community.

“I hope [the protest] will raise awareness about the fact that there are trans students at Quinnipiac and that there are other members of the community who support their struggle and who are supportive of their rights,” Diaz said.

GSA is very passionate about LGBT rights in general and hope to increase awareness on campus, according to Mangili.

“A lot of people feel they cannot come out on campus,” Mangelli said. “This protest is a way to vocalize that those people have a community here, and they have support if they are looking for it or need it.”