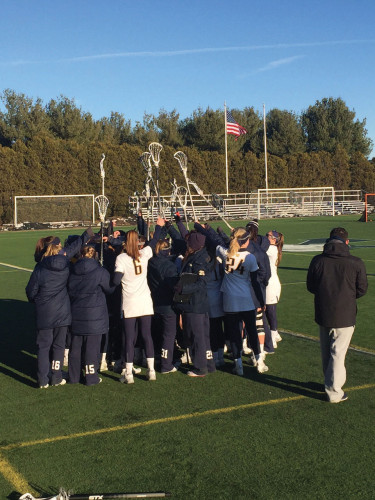 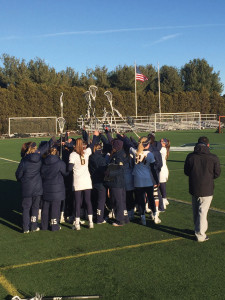 The Quinnipiac women’s lacrosse team fell to Army West Point by a score of 9-8 at Yale’s Reese Stadium on Sunday afternoon.

The mental aspect of the game seemed to be Bobcats’ downfall.

“This team is definitely a roller-coaster right now… We’re definitely going to work on the mental side of the game” Quinnipiac head coach Tanya Kotowicz said.

The Bobcats started off hot, with multiple takeaways in the midfield and offensive opportunities, but Army started off the scoring with three consecutive goals.

Following those goals, Army called a timeout and came out with a goal similar to the Bobcats. Kuhn quickly answered with her second goal, ending the first half off with a lead of 5-4.

Army came out of the second half scoring three goals in a row, taking control of the game. The Bobcats picked up some momentum as Alex Hlesciak scored a goal, but Army responded quickly with a goal of its own  to maintain the lead.

With little time left in the game and trailing by two goals, the Bobcats called a timeout. Returning to play from the time out, senior midfielder Danielle La Rocca and sophomore midfielder Ellie Swenson lit a spark for the Bobcats with goals, tying up the game and taking it into overtime.

After a scorless frame, the game went into a second overtime in which Army’s Rachel Hornick netted the game-winning goal.

Even with the upcoming week off, the Bobcats will not rest.

“We’re definitely going to make sure we get to work. There is no rest. To get better, you have to work,” Kotowicz said.

“We just have to get our heads right,” she said. “Just got to take the anger and frustration from this game and keep it until we go to California and come out and use it”.

Even with this loss, the Bobcats realize they have a long season ahead and are looking towards the future.

“This team is amazing they have super high energy. They are all in, we are just slowly learning how to win” Kotowicz said.

This is the third straight loss for the Bobcats, who head to the west coast. Quinnipiac will play UC Davis on March 12th at Aggie Stadium in Davis, California.