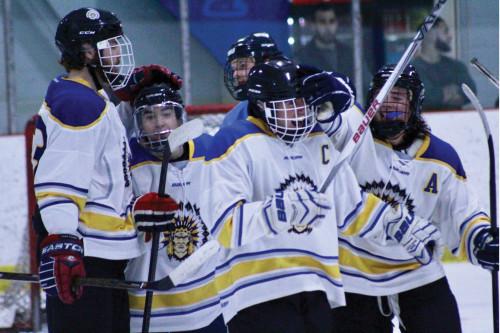 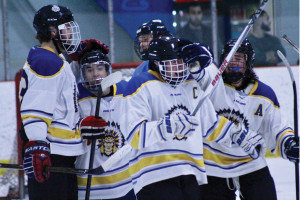 The Brave Hockey Club, Quinnipiac’s unofficial men’s club hockey team, had a strong season this year and qualified for the regional tournament in New Jersey.

Unfortunately for the players, they were unable to go to both the regional and national tournament due to a lack of funding. The Brave, like all other club teams on campus, are self-funded and are not recognized by the school due to the Title IX lawsuit settlement in 2013.

“There’s so much more than the school deciding just not funding us,” Brave secretary Brandon Vattima said. “It’s a mixture of Title IX obviously, liability, all of that good stuff. At this point, we’re just looking to prepare ourselves for when affiliation is feasible.”

Affiliation for the Brave would mean that it could play as the Bobcats and play home games at High Point Solutions Arena, as opposed to now where the team plays its home games at Northford Ice Pavillion, roughly a 15-minute drive from Quinnipiac.

Colin Conte, who graduated in 2016, founded the Brave Hockey Club with three other people in the fall semester of 2013 and had to go through a rigorous process to start the team.

“We were totally independent,” Conte said. “We went through USA Hockey to get our insurance and were considered a men’s league team through USA Hockey. We had to find reps who were willing to come to our games. Transportation was on our own, and the teams that played against us was basically a scrimmage for them.”

Conte then was hoping for the school to help in some fashion.

“Our goal when we started was just recognition and realized that they weren’t even going to fund us,” Conte said. “We even offered to pay for ice time up at TD (Bank Sports Center). It’s just so much easier. It’s closer, you can take shuttle up for transportation and you don’t need to rely on kids driving there. And for us it was tough because at first we needed recognition to be in a league or conference.”

Luckily for Conte and the founding members, the Empire League was able to take them in.

Due to zero school funding, the 26 players on the team this season supported the club themselves.

“We are completely self-funded,” Brave treasurer Peter Beckwermert said. “This year the dues were $1,250 per person. The $1,250 covers the bare minimum- some apparel, ice time and we don’t really have any padding at the end of the season. We basically have the bare minimum to exist.”

Because the Brave aren’t recognized, it isn’t allowed to hold fundraising events on school property.

“Realistically, it’s not even worth the time,” Beckwermert said. “The amount of money we need is not going to be something that’s fundraised, and if it is going to be fundraised, it’s going to take the effort that most of the guys don’t have time for.”

The process of trying to fundraise money has been a problem from the start, and Conte has even tried forming coalition with other club teams, but that still hasn’t been enough.

The lack of funding also hurts the Brave from a competitive standpoint. The Brave only has enough money to get one practice a week on ice, while other club teams can get multiple practices in per week.

But the team isn’t looking for the school to just recognize them.

“Our quintessential outlook would be for administration and student government to recognize us as a chartered organization, which is pretty much Student Government Association (SGA) and administration recognizes us and funds us.” Vattima said.

Vattima is also a sophomore class representative for SGA and is hoping to use his position to help the team get chartered.

“We were looking for SGA to team up with administration,” Vattima said. “We just want it to be more of a joint effort rather than just giving the bare minimum. Frankly at this point, we’ve reached our ceiling.”

A key date for the Brave, and other club teams on campus, is June 30, 2018. Vattima met with Vice President and Provost Mark Thompson, and informed him that the school can’t have club sports under a federal contract until June 2018. The hope is that they can make progress so that club sports can be recognized the following semester.

“Our goal should be that when June 30, 2018 comes around, that the start of the new calendar year, that semester, we sign our papers, we sign liability, we sign a contract with Athletics saying we’re recognized by the school and we’re affiliated,” Vattima said. “That’s the gameplan and that’s what I’m working on with SGA.”

Vattima and Conte both commended Thompson for his effort in helping Quinnipiac’s club teams under tight restrictions.

The biggest challenge the club will face in its affiliation process will have nothing to do with hockey. Rather, it will be the process of getting an equal ratio of female club sports to male club sports and make it equivalent to the student population ratio due to the Title IX lawsuit.

“We’re going to need 65-35 female athletes to male athletes,” Vattima said. “The biggest contingency is probably being able to get Dance Company, Dance Fusion and Kickline back under Athletics, because they were under athletics but they just got kicked off. They’re recognized by the school, but they aren’t chartered anymore.”

This season the Brave went 8-7, but one of the key moments of the season was getting roughly 80 players to try out, which was up from the 40 that tried out last year. Because the Brave isn’t recognized, it can’t be a part of the school’s involvement fair, so getting that many players to try out was a success for them.

“I didn’t even know there was a club hockey team when I came here,” Vattima said.

Beckwermert had to find out on his own if there was a club hockey team and how to get on it.

“Originally, it was kind of hard to get information on it,” Beckwermert said. “I remember going up to a table at the athletics center when I came to visit and saying, ‘I heard there’s a club hockey team here’, and they said ‘There isn’t a club hockey team.’ So I had to do some digging myself on who to contact, but now there’s a little bit of hype around us and word-of-mouth and a lot of people know about us and other club sports.”

The key members of the Brave Hockey Club, who sent up two players to play for Quinnipiac’s Division-I team this season, share the same dream.

“Playing up on TD (Bank Sports Center), funded, having 200 people come to our game against Southern (Connecticut), and beating Southern,” Vattima said.