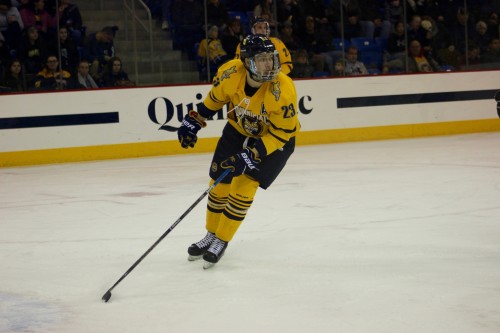 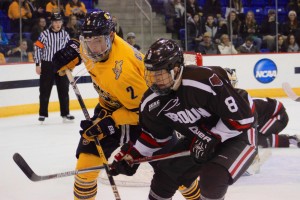 The Bobcats dominated the Bears by a final score of 5-1 to win the best-of-three first round series and advance to the ECAC Hockey Tournament Quarterfinals, where they will play fourth-seeded St. Lawrence on the road next weekend.

“It was a good win and we’re excited to advance,” Quinnipiac head coach Rand Pecknold said. “I thought that we played well tonight… It was a good battle. I thought Brown was really good tonight, and we find a way to win.”

Quinnipiac came out of the gate with even more offensive pressure than last night’s game, which saw them put up 17 shots in the first frame of play.

Tonight, under three minutes into the first period, sophomore Thomas Aldworth thought he had scored his ninth goal of the season on a wraparound. However, the net was dislodged prior to the puck crossing the goalline, thus the call stood as it was called on the ice; “no goal.” 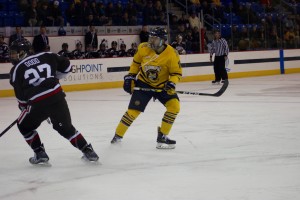 But just a minute later, the Bobcats got on the board for real when junior Landon Smith showcased his professional-level snapshot, which beat Brown goaltender Gavin Nieto’s glove to give Quinnipiac a 1-0 lead.

Just three minutes later, junior Tanner MacMaster scored his eighth of the season and second in three games on the power play to put his team up by two going into the second period.

After a quiet first half of the second period, Brown cut Quinnipiac’s lead in half at 15:16. Brown’s first line center, Sam Lafferty, redirected a shot past freshman goalie Andrew Shortridge for his 13th goal and team-leading 35th point of the season.

Aldworth threw the puck towards the net and senior assistant captain Tommy Schutt got just enough to send it into the back of the net and increase Quinnipiac’s lead to 3-1. 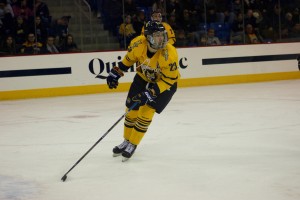 The Bobcats haven’t had much of it this season, but getting some timely bounces are a major confidence booster for Pecknold and his team at this point in the season.

“Sometimes just a little more puck luck, our guys are a little more confident shooting the puck, Pecknold said. “I think when we got in that little drought there for a while [there was] just a lack of confidence and some good goaltending too.”

With time ticking down in the second period, Brown found itself some puck luck of its own…or so they thought.

Bears defenseman Zach Giuttari fired a shot that was tipped past Shortridge to cut the Bobcats’ lead to 3-2. However, after further review on the play, referees determined the goal was a high stick, thus the game stayed at 3-1 going into the third period.

Six minutes into the final period of play, Quinnipiac freshman Nick Jermain and senior captain Connor Clifton found themselves as the main skaters on a 3-on-2. Jermain slinged a pass over to Clifton who one-timed the puck past Nieto and into the back of the net for a 4-1 lead.

Shortridge stood tall in the third period, stopping all 9 shots that came his way. While his work in net was important, the offensive abilities of Quinnipiac were greater, as the Bobcats poured a total of 47 shots on net to Brown’s 25.

With just about four minutes left in the game, Brown pulled Nieto and at 17:25 Bo Pieper nailed a near full-ice shot to solidify the series for the Bobcats.

Quinnipiac’s ability to win the series in two games and avoid a decisive third game on Sunday, is a win in itself before travelling to Upstate New York next weekend. 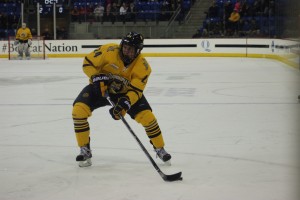 “[It’s] very important especially with the seven hour bus ride coming up to St. Lawrence,” senior assistant captain Tommy Schutt said. “Having a Sunday off, guys will probably come in here, probably get a light stretch and not having to play a 4 o’clock game on a Sunday is — you know we’ve had to do that before with Cornell and it’s not fun. It’s a battle.”

So far this season, Quinnipiac has one loss and one tie in two games against St. Lawrence. The loss was 2-0 on the road in Canton, New York, while the 0-0 tie came on the road in Ireland during the Friendship Four Tournament.

The Bobcats’ first game in a best-of-three series against the Saints will be on Friday March 10 at 7 p.m. in St. Lawrence’s Appleton Arena.