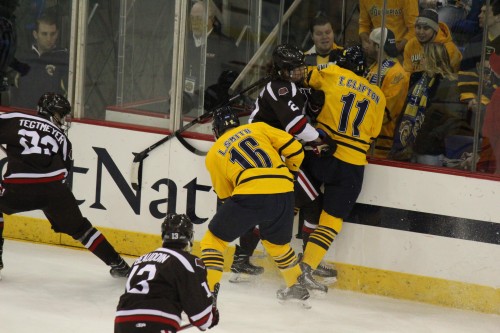 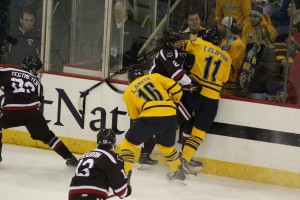 Quinnipiac men’s ice hockey showed no mercy in its first playoff game of the season. The Bobcats beat Brown, 6-1, and outshot the Bears, 46-20, behind goals from six different skaters at High Point Solutions Arena on Friday night.

With the victory, Quinnipiac is one win away from winning the best-of-three, first round series.

“It was a good win, I thought we played well tonight,” Quinnipiac head coach Rand Pecknold said. “I thought we had good jump and good energy and we’re excited to get a ‘W’ and get ready for tomorrow.”

The Bobcats came out of the gate flying tonight, scoring just 32 seconds into the game.

Senior Tim Clifton carried the puck into the offensive zone, took a shot that was tipped by sophomore Craig Martin, then freshman Alex Whelan followed up on the rebound for his fourth goal of the season and second in as many games.

The early goal was a major catalyst in Quinnipiac’s eventual dominant offensive display.

“One, you always want the first goal of the game,” Tim Clifton said. “Two, the first shift of the game, you want to come out there flying. All five guys on the ice did the right things; we got a puck deep, we went, cycled it out…[Martin] tips it, Whelan bangs home the rebound. Dirty, beautiful goal.” 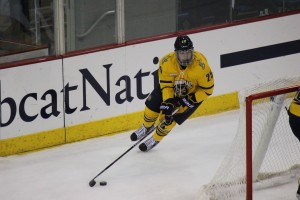 Nine minutes after the early marker, junior Landon Smith sniped home a shot from his sweet-spot – along the half wall and over the goalie’s shoulder – for his 10th goal of the season and a 2-0 lead going into the second period.

Quinnipiac had to wait a little longer to score in the second frame of play. This time around, Whelan found Tim Clifton on a 2-on-1 and made no mistake finding twine past a sprawling Gavin Nieto.

While Quinnipiac scored just one goal of its six in the second period, the shot total was indicative of strong offensive play. The Bobcats led the Bears 34-12 in shots on goal going into the third period.

Similar to the first period, Quinnipiac started off the final period of play with a bang.

Sophomore Thomas Aldworth showed his elusive speed and nifty mitts when he quickly entered the zone, pulled a toe-drag around Brown defenseman Max Gottlieb and finessed the puck off of his backhand, into the back of the net to give the Bobcats a 4-0 lead early in the third.

About three minutes later, senior captain Connor Clifton ended an eight-game goalless drought with a seeing-eye shot from the point that managed to get by Nieto. 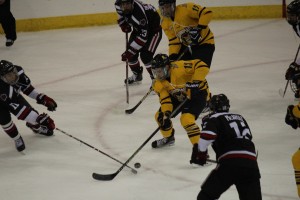 Just when one thought Quinnipiac would save some goals for its next game, there were more.

This time senior K.J. Tiefenwerth went top-shelf from a near impossible angle – (see Scott Davidson’s goal against UMass Lowell from last year’s NCAA Tournament) – for his third goal of the season and Quinnipiac’s sixth of the contest.

The goal was not only an important confidence-booster for Tiefenwerth moving forward, but also marked a game in which all four lines of forwards contributed in the goals column for Quinnipiac.

“It’s nice, we want to score goals whether it’s two guys, three guys or six guys,” Pecknold said. “It was good to put those in the net tonight, and I thought it was a really good team effort.”

The goal was the last straw for Brown head coach Brendan Whittet. He pulled Nieto and replaced him with Connor Maher for the last seven minutes of the game.

The change worked in Brown’s favor. 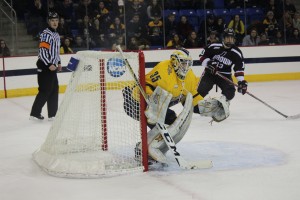 Max Willman ended Quinnipiac freshman Andrew Shortridge’s shutout bid with his 11th goal of the season off a play in which Willman pulled the puck from behind the goal line and jammed it home.

But for Shortridge, he could care less about individual numbers at this point in the season.

“The only thing I care about is wins,” Shortridge said. “That’s all that matters.”

And that is what the Bobcats got at the end of the day.

Quinnipiac will meet Brown once again tomorrow night at High Point Solutions Arena, in search of one more win that would send them to St. Lawrence next week in the ECAC Hockey Tournament quarterfinals.