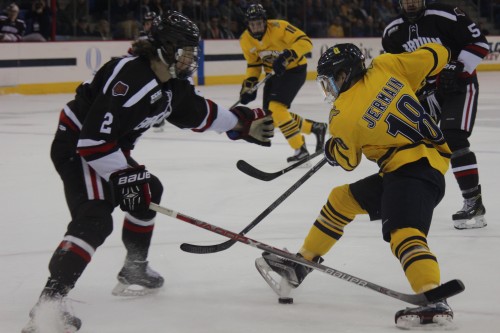 After finishing ECAC play with 27 points, fifth-seeded Quinnipiac men’s ice hockey will take on 12th-seeded Brown in the first round of the ECAC playoffs at home. The winner of the best-of-three game series will face fourth-seeded St. Lawrence on the road in the quarterfinals.

The Bobcats ride a three-game win streak in conference play coming into the playoffs while Brown has lost its last six ECAC games, including its most recent loss to Quinnipiac on Saturday night. 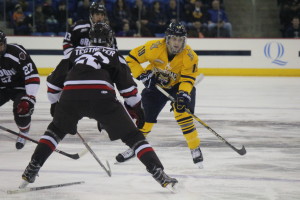 Quinnipiac head coach Rand Pecknold notes a similar battle is guaranteed, since these two teams have seen a of lot each other in the not-so-far past.

The two teams have met twice this season, both games where Quinnipiac controlled play. The first game resulted in a 1-0 win for Quinnipiac on the road and the second saw Quinnipiac winning by a final score a 4-1 at home.

In the first meeting on Feb. 3, junior forward Bo Pieper scored the lone goal in the first period while Andrew Shortridge stopped 21 shots for his first collegiate shutout. The total shots on goal in the game were 32-21 in favor of Quinnipiac, but both teams struggled on the power play, scoring no goals for a combined 0 for 5 with the extra man.

In game two, Quinnipiac emerged victorious, but not after a slight scare in the first period.

Brown Bears forward Sam Lafferty thought he had scored the game’s first goal after he used his speed down the wing, took a shot off the post, then saw the puck trickle in. Luckily for the Bobcats, the net was off its moorings, leading to an eventual call of “no goal.” 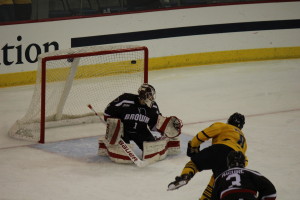 Quinnipiac freshman Nick Jermain put the Bobcats on the board first with a dazzling goal that saw him deke a Brown defender and goalie Gavin Nieto. The Bears evened the score just a minute later, but Tanner MacMaster, Thomas Aldworth and Alex Whelan rattled off goals in the second period to propel the Bobcats to the 4-1 win.

After Lafferty, Charlie Corcoran and Max Willman round off Brown’s top offensive line; one of the best in the league. The top line has accumulated for just under 50 percent (85 points) of Brown’s 173 total points scored this season.

In order to succeed in this series, one of the main points of emphasis for Quinnipiac is limiting the first line’s offensive production.

“They’ve got their top line that has a lot of their offensive production,” sophomore defenseman Chase Priskie said. “We’re working towards shutting them down, like we do every team, but I think we just have to play Quinnipiac hockey and stick to our identity.”

Unlike last season, which saw the Bobcats at the top of the national polls and earn a spot in the NCAA Tournament through Pairwise rankings, this is not the case this year. In order to advance to the NCAA tournament, the Bobcats will have to win the Whitelaw Cup as ECAC Champions. 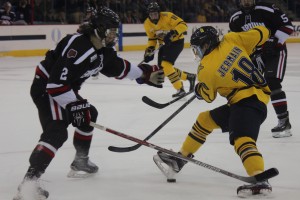 “Right now, we really have the same attitude going into this weekend that we’ve had all year,” Dumais said. “Everybody obviously knows that it’s do-or-die, but we’re not magnifying anything or doing anything different.”