The person behind the parking 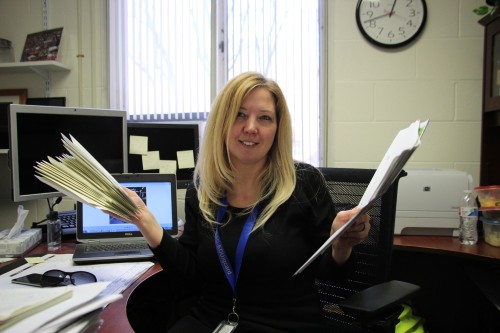 From Hilltop Lot to Hogan Lot, there is one woman who controls all things parking and transportation at Quinnipiac, and her name is Shanon Grasso.

However, Grasso worked her way up the ranks to get to the position she currently has. About five years ago, her husband, John, told her there was an opening at Quinnipiac in the Department of Public Safety. She had some background with police work for the Derby Police Force, as well as experience with a non-profit transit district.

She started out at the gates from 4 p.m. to midnight, Sunday to Thursday every week. She spent holidays in the guard booth, alone in an empty parking lot, yearning for more work. She was then promoted to dispatch and was eventually asked to start with parking and transportation.

Grasso admitted that nobody really wanted the parking job, so she started in on it.

“I started looking at what we had in place, and I was surprised that we really didn’t have any systems,” Grasso said. “We did things just because, but there was really no follow up. Officers would write paper tickets, but there was never anything behind it. Students didn’t really have to pay them, there was no enforcement to them.”

On an average day, Grasso arrives on campus around 7 a.m., give or take a few minutes. Her day lasts until 3 p.m. During those hours, Grasso monitors her email all day. With nearly 9,000 emails in her inbox, Grasso said she tries her hardest to get a hold of everyone. Her first interactions of the day are the public safety officers who were on duty the night before.

“I open my mail… I get bombarded with usually the line officers,” Grasso said. “They have had roll call, maybe there was an issue the night before. Whatever I have to deal with by priority first. Then the day unfolds.”

Grasso said her schedule changes day to day, mostly depending on the weather. When it snows, Grasso’s job is to inform students, faculty and staff about moving their cars from lot to lot. She sends out email blasts to inform the community about different parking bans, important shuttle service information and snow removals.

Grasso said the last thing she wants is for anybody to be towed, but sometimes it’s the only option left. She said if she has time, she calls people and asks them to move their cars.

Grasso also has to deal with complaints from students and sometimes students’ parents.

“I deal with, ‘Hey, my car got towed.’ Now, I’ve got someone in here, maybe someone and their parents in here,” Grasso said. “I have to go through what happened, how come you didn’t know or what could I have done better or did you check your email?”

Grasso is also in the process of bidding for a new shuttle company after having some problems with the current service.

“We currently have DATTCO, but we put in an RFP, and we’re putting out to a least a dozen companies to get a bid on a new service,” Grasso said. “I think word has it on the street because I am being contacted by other bus companies who want to be included, so it’s kind of out there.”

Once that is sorted out, Grasso wants to look at carpooling, the technology behind parking, and networking with other universities to see what successes they have had.

Grasso said the parking department is days away from being able to accept credit card as a form of payment for parking tickets.

Outside of Quinnipiac, Grasso said she has a fantastic life. She has been married for five years to her husband.

She also has five children, one of her own, Michael, two that are her husbands kids, Ben and Jake, and two from a previous marriage, Heather and Jen.

Grasso currently takes an Italian class and a contemporary mathematics class at Quinnipiac.

“She still remembers me and always waves and talks to me,” Hohman said. “I think too many people go to her in a fit of rage, going there expecting to get what they want and will fight tooth and nail, and I don’t think she responds well to that.”

As far as dealing with student complaints, Grasso said she doesn’t take it personally.

“I think I approach it in an understanding, calm way because I can picture being in that position,” Grasso said. “There’s nothing more frustrating in going somewhere and then having to drive around forever to find parking. I’m not immune to it.”

Hohman said if people treated her with respect, she will do the same.

“It’s just part of the job for her to say no, but it doesn’t make her a bad person,” Hohman said.

Overall, Grasso said she could be doing other things, but she wouldn’t give up her job for anything else.

“I don’t ever want to paint the picture that I’m doing this alone,” Grasso said. “I feel bad when I don’t get back to somebody right away but I am trying in that sense. I enjoy it.”