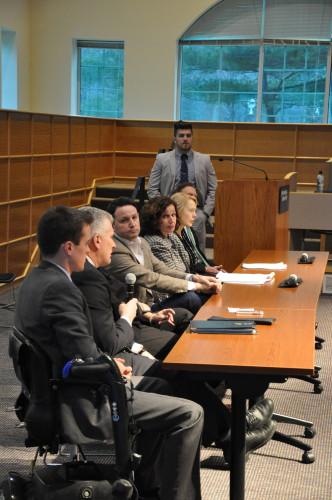 Quinnipiac board officials and members of the Student Government Association (SGA) met Thursday, Feb. 22 for the annual State of the QUnion to discuss recent and upcoming events affecting the university.

The panel opened with questions provided by SGA, regarding various issues regarding upcoming renovations, undocumented students and the reasoning behind the lowercase “u” in university’s logo.

“SGA did their best to ask direct, kind of tough questions not everyone wants to answer,” Joseph Mullaney, student body president, said. “It’s not often you get all six of those people in the same room, so we are very excited about that.”

A total of 16 topics were discussed throughout the event.

As noted in the past, the school’s association with the town residents has not been strong, but President Lahey expressed the understanding of the Hamden mayor, Curt Leng, to students’ presence in and around the Quinnipiac campuses.

In efforts to continue this good standing, Quinnipiac recently donated $1.4 million as a contribution to the town. Lahey also acknowledged that the school had already made a similar donation of $1.2 million, two years ago. With the grants that have been provided to Hamden, Lahey indicated that the future relations between the school and the town are on the rise.

To compensate for the spendings that are donated, the university has developed a plan to reach a financial goal of $1 billion in funding by the 100th anniversary of the university in the year 2029.

“The board of trustees approved last year a three-year plan of additional funding for the development office to add staff and resources so that this could be successful,” Lahey said. “We are talking actively with major donors about major gifts that will be part of this campaign. I am confident that over the next 2-3 years will have some major news to announce.”

With respect towards the future, the discussion then focused on upcoming school renovations, specifically the dining halls. Drucker explained the upcoming renovations that will be occurring in the the cafeterias on the Mount Carmel, York Hill campuses and North Haven campuses.

“We have been working in collaboration with Chartwells to survey over 3,000 students, and we’ve gotten a lot of student feedback,” Drucker said. “It’s going to be more than just the meal plan. It’s really enhancing the total dining experience.”

With the construction of new outdoor sports facilities for both the athletics department and students, this integration will be beneficial to not only Quinnipiac members but the community as well.

“It’s really a better fan experience what we’re building, so the student body can come out. It can be a social thing for the student body, a sense of pride,” Filardi said. “It’s much more than a new field, it becomes part of our lives.”

Drucker made clear that although the atmosphere of sports may be be evolving with the expansion of resources, the allowance of student gatherings on campus will remain the same.

“It remains as is right now. We don’t have any formal gatherings prior to events or anything specific,” she said. “As far as I’m aware, we are not changing anything.”

Filardi then addressed the fear some students have of the growing population of Quinnipiac undergraduates and the availability of space on campus for these students.

“(The size of the student population) is not happenstance. It’s all been planned,” he said. “I think it’s pretty clear that in the next three years, the number of new teaching spaces will increase to satisfy any concerns people may have about space needs.”

Filardi later went on to further this explanation when asked again about the growth of the student body in relation to room in the cafeteria.

“I’m not really sure that there’s a whole bunch of lounge space planned to be taken away,” he said. “I think we recognize that lounge space, social space, study space are truly important, especially today.”

Students expressed this continuous fear of the increasing population in the form of classes as well regarding the capacity of each class and the amount of classes provided specific to each major.

“If we look at numbers or if we look at seats that are available, I think that there is no problem with insufficient capacity,” Zinn said. “I do think that it is true that some courses have been offered less frequently, so we have room for those popular courses that we have many students wanting to take.”

Lahey followed these statements by ensuring the audience that Quinnipiac is in no way overpopulated.

“We pretty much now have set the full time undergraduate number. We will not be growing beyond that,” he said. “We will get a little bump by replacing slightly larger classes with slightly smaller classes that are graduating, but we believe we do have the physical capacity to service that number.”

The conversation then turned towards the branding of the school in regards to the controversy over the new university logo. Rhodes addressed the reasoning behind the rebranding and why the board decided to go with the lowercase “u” in university.

“We are on a multi-year mission to define clearly or clearly articulate who Quinnipiac University is by the type of students we have and those that go on to make a mark,” Rhodes said. “The weighting of the word ‘university’ was too large, essentially overpowering Quinnipiac.”

On Feb. 17, the school announced this new logo, exhibiting an uppercase “u,” designed with a different font and size so as not to take away from the emphasis of Quinnipiac.

Rhodes furthered the reveal of new imaging of the the schools departments by discussing the upcoming renewal of the athletic logos on team uniforms and equipment.

“We are in active design on a refresh of the athletics’ identity,” he said. “It really is an exploration into how we coincide our university mark’s brand level with the athletics’ mark in an identity that demonstrates the pride, the esteem, the stature of not only this university, but of our athletics.”

For the sports that are not currently associated with the school, the six non-affiliated club sport teams, Lahey also examined merging them into university standings.

“We are certainly in support of club sports,” he said. “We’re still working out the final chapter of our Title IX commitments that we’ve made. Once those are completed, we’ll be in a position to put more resources into athletics, generally club sports.”

In response to recent political standings, the panel additionally examined undocumented and multicultural students on campus.

To prove the intentions of integrating these kind of students into the university climate, the multicultural students will now have a suite in the Carl Hansen Student Center alongside organizations such as Q30 Television, Fraternity and Sorority Life and SGA.

“We recognize, students recognize, that this is a privilege to be in that space and students coming in are very excited because they feel like they can easily have engagement in places like the student center,” Ariza said. “You’re nearby other leaders on campus that can affect campus climate at the university.”

In regards to the petition that has been circulating campus in support of Quinnipiac’s undocumented students, Lahey made it clear that although the school does emotionally and financially back these students, it is not allowed to go against the standing rulings.

“I do think it’s important that everyone distinguishes that I do support people to express themselves on all sides of these issues, but it is a little different for the president of the university because when the president speaks he speaks for the entire university,” he said. “But the university can not be in a position to not obey the laws, the local laws or the government laws.”

The Q-and-A lasted about an hour and was held in the Mount Carmel Auditorium at the Center for Communications and Engineering. SGA hosts this event annually and encourages students to take part whether it be in person or through streaming outlets.

“I wish there were more questions, I honestly thought it would take longer, but, once again, I thought for what we asked and the time we had, we did a great job at asking very straightforward questions,” Mullaney said. “We didn’t beat around the bush, and so I’m very happy about how that went.”