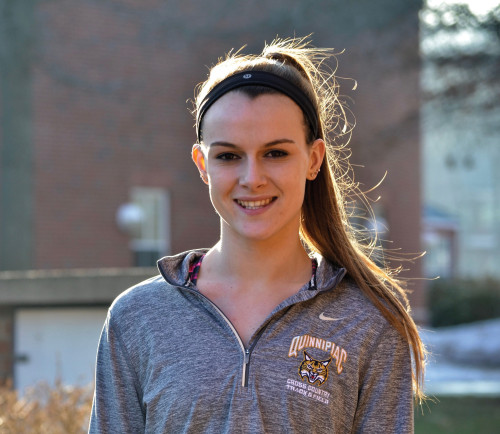 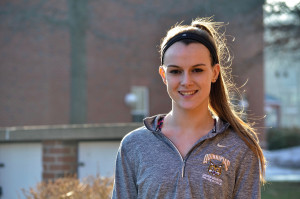 Quinnipiac track star Jessica Lee loves hurdles. Sure, she also claimed a victory in the 200-meter dash at the MAAC Championships last week on top of her usual 60-meter hurdles victory, but the junior from New Jersey likes the added challenge of a few obstacles in her path when running track.

“Hurdles are her thing,” teammate and close friend junior Mackenzie Merkel said. “She gets upset when her practices don’t include hurdles.”

Hurdles are “her thing” for good reason. Lee’s victory at the MAAC Championships on Feb. 19 was her second straight hurdles title at the event. Last season, she became the first hurdler in Quinnipiac to win the New England Championships with a program-record time of 8.61 seconds in the finals. The win was one of her six hurdles titles during her first two years of college. This weekend, she took the hurdles title at the New England Championships again, with a meet record time of 8.39. Remarkably, Lee has only been participating in hurdles competitions since her junior year of high school.

This season, Lee has encountered a different set of hurdles. After Lee’s stellar performance last week earned her MAAC Most Outstanding Performer honors, head coach Carolyn Martin revealed that her star runner has not been 100 percent healthy all season due to a nagging hip injury.

“There have been a lot of ongoing issues with my hips,” Lee said. “I notice it at practice and in workouts, and (I’m) trying to figure out when I should stop or continue to push through it.”

However, when the starting gun blasts and the race is on, the pain subsides as adrenaline takes over.

“It doesn’t hurt much during competitions,” Lee said. “I’m just focused on the race.”

Hip problems didn’t stop her from setting another personal record of 8.45 in the MAAC Championship hurdles, beating her mark of 8.61 in last year’s finals. The performance is also a conference record, though no longer her personal best since her performance at the New Englands this weekend helped her surpass her record that was just a week old.

In fact, it seems like every time she steps foot on a track, she is breaking a personal record. Lee has been constantly improving since putting on her Quinnipiac uniform for the first time as a freshman, and not just in terms of speed.

“If you look at Jess’ vertical jump her freshman year, it was about 19 or 20, which was near the bottom on our team,” assistant coach Steve Belanger said. “This year, it’s around 28, which is best on the team. She’s definitely a hard worker.”

Hard work pays off, even when you don’t always want it to. Lee was not a fan of track when she began running in middle school. At the time, she would have preferred to stay on the dance floor. However, her middle school coaches saw her potential and insisted that she continue running in high school. It seems to have paid off with a crowded trophy collection.

Despite her consistent success, Lee remains the epitome of a quiet competitor.

“She is definitely very humble,” Merkel said. “She knows her success but doesn’t want to make it more than what it is.”

Despite Lee’s timid external demeanor, a fire burns brightly on the inside.

“I seem calm on the outside, but I really don’t like to lose,” she said.

Luckily for her, she doesn’t lose much.

Lee has won 13 individual events during her time at Quinnipiac. Her name is littered throughout the school record books. Her head coach considers her one of the greatest athletes to ever don the Quinnipiac blue and gold, in any sport. However, getting her to talk about her accomplishments is like pulling teeth, even when it comes to her place among Quinnipiac’s elite athletes.

“I don’t consider myself one of the best,” Lee said. “I never really thought about success in terms of how I compare to others. I just focus on what I’m doing, how I can do better and not getting too comfortable.”

A former dancer before noticing her need for speed, Lee consistently pirouettes around chances to talk about herself. She prefers to let her running sneakers do the talking, and they sure speak loudly.

Her quiet nature translates to the track. Lee remains calm on bus rides to the track with a small dose of country music. While many runners like to pump themselves up before a race, Lee elects to go the opposite route and wind down. She saves her intensity for when she approaches the starting line.

“When I start to get hyped up, I think too much about the race and try to control everything,” she said. “I run my best when I’m just relaxed and let go.”

Lee’s coaches and teammates certainly appreciate her approach and leadership through example.

“She sets a great example,” Belanger said. “She gives the other girls confidence that they can aspire to be great as well.”

“You see how hard she works in practices,” she said. “She’s definitely motivating to some of our younger girls. They want to imitate her work ethic because she’s been doing so well. She’s someone we look up to.”

The rest of the team is smart to follow the lead of a proven winner. Their only challenge is keeping up.