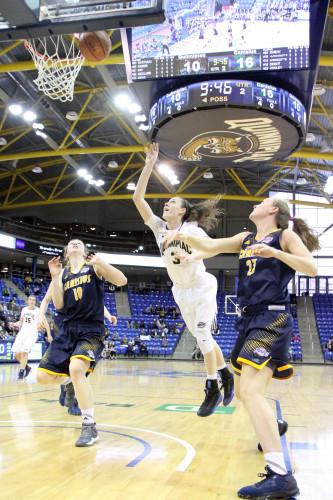 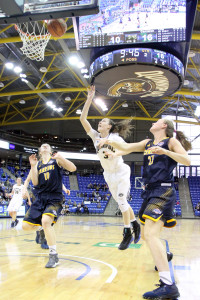 It was a special night for seniors Brianah Ramos, Morgan Manz and Adily Martucci as the Quinnipiac women’s basketball team defeated Canisius, 62-49, on Saturday’s Senior Day. In addition, the team clinched the top seed in the upcoming MAAC Tournament for the third year in a row.

From the tip off, the Bobcats were out-of-sync and could not take care of the ball as Canisius went up 10-3 early. Sophomore Aryn McClure and junior Carly Fabbri hit some big shots late in the first quarter to cut Canisius’ lead to six, giving Quinnipiac some much needed momentum heading into the second quarter.

“Canisius came out and played stingy defense,” head coach Tricia Fabbri said. “I thought they did a really good job on drawing us and kicking to the open person on the weak side of the floor. They opened up hitting three 3’s in that first quarter, which gave us some real reason for concern, but we buckled down and relied on our curveball with the trapping zone defense.”

The Bobcats trailed 10-16 after the first quarter, shooting just 25 percent from the floor. Despite a disappointing performance in the first, Quinnipiac came out on fire as they would outscore Canisius 19-7 in the second half. The Bobcats primarily dominated the boards, out-rebounding the Golden Griffins 27-17 in the first half.

“Once we were able to calm down and I think just execute a little bit better and get the lead at the half, we came out and controlled the majority of the game in the second half,” Fabbri said. “I think during this time of year, not only does it come down to big plays, but ultimately I feel it’s about stops. Getting the big stop and getting not necessarily the shot, but the putback, and I like how we’re getting the offensive board.”

Carly Fabbri went 3-for-4 from 3-point range in the first half and led all scorers with 9 points as the Bobcats took the 29-23 lead at the half.

“Canisius is a gritty team,” Carly Fabbri said. “They always fight until the end, so we knew it was going to be a tight game. We pulled away in the third quarter and it’s nice for our shots to go down, but we never expect a game against them to be any different.” 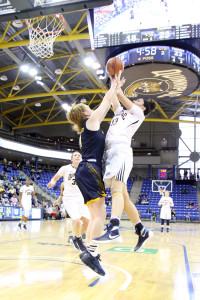 Quinnipiac had the same success in the third and fourth quarters as they did in the second, pulling away with the 62-49 victory.

Senior Adily Martucci had a strong second half, scoring five of her 11 points in the fourth quarter. Junior Sarah Shewan also had a big game and finished with a game-high 16 points. Shewan made a huge impact on the boards, grabbing 7 of her 12 on the offensive glass, and filled in for the dominant presence of Paula Strautmane, who has missed the past two games.

With the win, the Bobcats clinched their third straight No.1 seed in the MAAC Tournament, which is set to begin next Thursday at the Times Union Center in Albany, New York.

Quinnipiac will be hungry for revenge and will look for a chance to once again cut the net and raise the trophy, as Quinnipiac lost to Iona 57-51 in the championship game last season.

“Obvious it’s nice to have that number one spot, but we know that this is not our end destination,” Carly Fabbri said. “The three games in Albany are going to determine how we end the season.”

For Martucci, who just played her last regular season home game at Lender Court, she has high expectations for the journey to Albany. Martucci agreed that the seeding doesn’t matter unless the Bobcats ultimately come out as MAAC champions.

“This is not really what’s as important,” Martucci said. “We want the real championship that during the tournament, but it is nice to be seeded this high.”