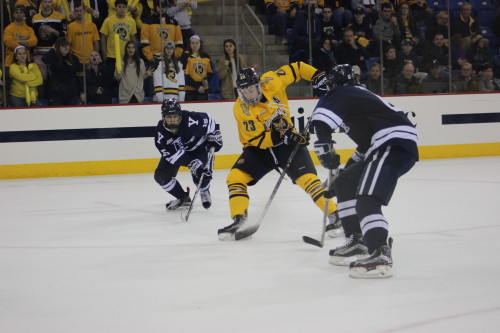 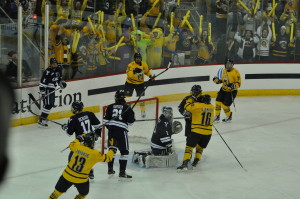 Quinnipiac men’s ice hockey defeated Yale by a score of 3-2 on Friday night at home. The all-important ECAC game elevates the Bobcats’ record to 18-13-2 overall and 12-8-1 conference while Yale sinks to 11-12-15 overall and 7-10-4 in conference play.

Quinnipiac head coach Rand Pecknold was pleased with the big win in front of an even bigger crowd.

“We’re happy to get out here with a win,” Pecknold said. “I thought the fans were awesome. That was just a phenomenal experience for our athletes to play in front of a crowd like that.”

The atmosphere in High Point Solutions Arena was electric from the get-go.

Fans donning Bobcat blue and gold filled up the student section over an hour before puck drop, waiting for the most-anticipated home game of the season.

Then the game started. 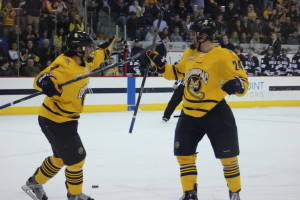 Only 1:20 into the game Yale forward Chris Izmirlian took a goaltender interference penalty, sending the Bobcats on a power play early.

Fans at the High Point Solutions Arena didn’t have to wait much longer to get loud.

On the ensuing power play, sophomore Craig Martin opened up the scoring with his ninth goal of the season just under a minute later to send Bobcat fans in a frenzy.

Just over three minutes after that, fans had no chance to take a breather.

Sophomore Thomas Aldworth used his speed to escape a defenseman along the left wing, took a shot on net and junior Bo Pieper capitalized on a juicy rebound for his 12th goal of the season.

Quinnipiac continued to pour on offensive pressure throughout the first period when junior Landon Smith tucked a shot in the crease right under the crossbar for his ninth goal of the season.

Smith has proven to be a conference-play juggernaut this season. Out of Smith’s nine total goals, eight have come in ECAC battles, including tonight’s eventual game-winner.

“I thought [Smith] was great,” Pecknold said. “Big-time goal, in tight, under the bar. That’s what he does, and I thought he had a really good game tonight.” 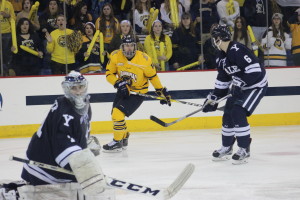 Quinnipiac’s dominant first period resulted in a 14-6 shots on goal advantage, but struggled to with consistency short afterward.

After a tough start in the first, Yale emerged as the dominant team in the second period.

Bulldogs captain John Hayden was the catalyst for his team when he scored just 21 seconds into the second frame to the swing in momentum in Yale’s favor. Hayden, a Chicago Blackhawks prospect, scored his 19th of the season off of a crafty pass from Yale’s leading point scorer Joe Snively.

Yale was able to build off of the early goal and control the majority of play in Quinnipiac’s offensive zone. Luckily for the Bobcats, freshman goaltender Andrew Shortridge made multiple timely breakaway saves.

His first showcased quick lateral movement off of a partial breakaway, but his biggest was a perfectly-timed pad save against Snively.

“I just try to do my job,” Shortridge said. “[I try] to keep us in it whenever I can and try to make a big save and just keep everything in the moment.”

About halfway through the period, a major injury plagued Quinnipiac when opposing team captains collided. Hayden left his feet and earned a major penalty for a charge on Quinnipiac senior captain Derek Smith, who left the game and didn’t return.

“I thought we had a great first period and really, really struggled in the second period,” Pecknold said. “Especially after Derek Smith took that hit to the head and we lost him for the night, so that hurt.” 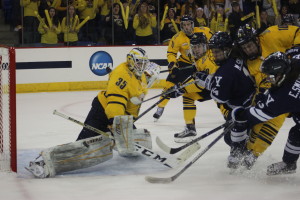 With just two-and-a-half minutes remaining in the period, Evan Smith was all alone on yet another breakaway. Shortridge made the first stop, but the Yale freshman banged home his own rebound for his fourth of the season to cut the lead to 3-2 going into the third.

In the final frame of play, Quinnipiac rebounded from a disappointing second period.

While there were no goals on either side, Quinnipiac finished the game with more consistent defensive efforts and outshot Yale in the period 11-6 for a total shots on goal count of 33-21 in Quinnipiac’s favor when all said and done.

After the win, the Bobcats were awarded the 15th Annual Heroes Hat for the eleventh time since the tradition began in 2002 against UConn.

Next up, the Bobcats host their annual senior night when they face another conference opponent in Brown on Saturday at 7 p.m.