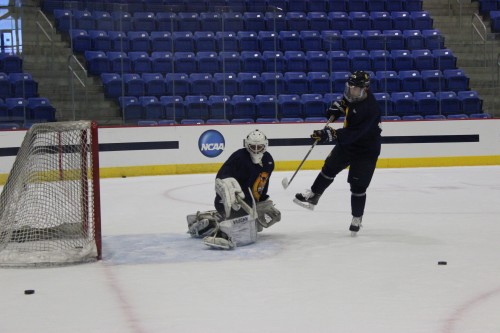 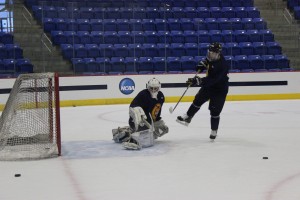 It’s a story usually saved for the big screen. A regular kid gets a shot with the big club after some unusual, unexpected occurrence.

For freshman walk-on goaltender Matt King, he is that regular kid living out the result of some not-so-regular circumstances following senior goaltender Sean Lawrence’s decision to transfer from the Quinnipiac men’s ice hockey team to Colby College.

“It’s an amazing experience,” King said. “It was a big adjustment, but I love being a part of this team.”

Just weeks ago, King was the starting goalie for the Brave Hockey Club, Quinnipiac’s ACHA Club Division III team. Now, he is listed on the official roster as a goalie for the Quinnipiac Bobcats.

He was one of three goalies to receive tryout offers from the Division I team following Lawrence’s departure.

“Sean [Lawrence] wanted to go and play, and we supported that… So we knew we would pull a kid out of the dorms,” Quinnipiac head coach Rand Pecknold said. “It doesn’t happen a lot, but I’ve done this long enough and stuff happens.”

Before King, fellow Brave Hockey goalie partner and Quinnipiac men’s and women’s ice hockey manager Jesse Burns got the chance of a lifetime as well. Burns suited up for two games against Cornell and Colgate on Jan. 13 and 14, a transition period in goal for the Bobcats. 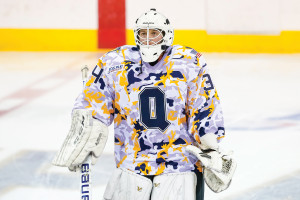 “The fact that I got to be in the spot I did and have the opportunity I did is one of the coolest honors you can have as a student at Quinnipiac,” Burns said. “It’s cool that there is more than one person that I can share that experience with.”

Now it’s King’s turn to make his own memories.

Although he may not see in-game action, the opportunity to stop pucks and be a presence on the same sheet of ice as some NHL prospects, after playing in the USPHL 18U league a season ago, allows King to catch a glimpse into a more professional side of hockey.

“It helped out with learning a lifestyle,” King said. “Coming into here you really see what happens, what goes on and the real hockey world.”

The opportunity to tryout for a full-blown hockey lifestyle meant the criminal justice major had to completely flip his schedule around.

“I had to change around my whole entire schedule for this team,” King said. “It was a tough adjustment because in the beginning, a lot of teachers didn’t understand the circumstances and everything. I had to explain to them that I was trying out for this team, but it was an indefinite thing, and I was still going to have to miss class and move around classes [while] nothing was guaranteed.”

At the end of the day, King battled hard and earned the spot as the new third goalie on the team. 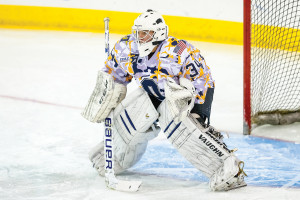 While he is in a new chapter as a student-athlete, his efforts remain meticulous the moment he walks through the doors of the TD Bank Sports Center.

“You’ve gotta get up early every morning, get [to the rink], make sure you get all of your equipment and everything, bring it to the room and set it all up nicely,” King said. “I have to make sure I’m the first one on and the last one off the ice.”

The hard-nosed mindset is apparent among his teammates. Freshman goaltender Andrew Shortridge has noticed the little things King does to progress his game.

“You can see it every day with his work ethic and his battle,” Shortridge said. “He’s out there working his bag off every day before and after practices, and he’s here trying to get better, trying to do whatever he can to get better to help us and it really shows.”

Pecknold noted that this move is what had to be done in order to get through the season, but King wouldn’t be all that surprised to receive another call from the big club if something similar happens again in the future. 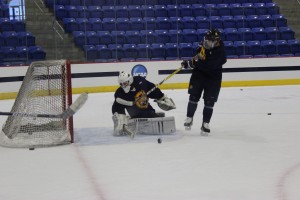 “[Pecknold] said that maybe in my junior year when [Chris] Truehl leaves, he might call me up again,” King said. “So maybe it’s something to look forward to.”

But for now, King’s value rests on his ability to make the most out of ice time and gel with the team mid-season. He has earned the respect of his teammates and coaches while turning his sudden appearance into a positive role on this team.

“He’s working hard, he’s a good kid, his grades are good, so we’re happy with him,” Pecknold said. “The guys really like him, and he’s blended in well for us.”