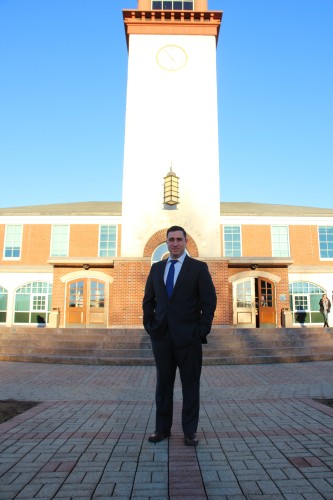 Though his life has taken him all over New England, adjunct assistant professor of history Philip A. Goduti has always known in his heart that he was meant to be a Bobcat.

Goduti was born in New Haven, but he was raised in Hamden.

“I did not know that much about Quinnipiac growing up,” Goduti said. “I kind of grew up on the other side of town. I was closer to New Haven, and this isn’t the Mount Carmel side of town.”

His first experience with Quinnipiac took place in the early ‘90s, while he was still in high school. Quinnipiac was having a conference on diversity. Right after high school, he worked at Quinnipiac in the Facilities Department.

Goduti became the first in his family to go to college and began classes at Quinnipiac College in 1993. He became heavily involved on campus. Goduti was a resident assistant (RA) and held various positions within The Quinnipiac Chronicle.

Four years later, he graduated in the class of 1997 with a bachelor’s degree in history and a minor in English. Additionally, he was the student commencement speaker for his graduation.

Back then, Quinnipiac College only had one graduation. Goduti felt very fortunate to be selected for this honor and was chosen after receiving the Student Affairs Leadership Award.

After studying at Quinnipiac College, Goduti went to Providence College. There, he was a graduate hall director and went on to receive a Master of Arts in U.S. History.

During his time at Providence College, Goduti met his future wife, Alyssa. They have been together for almost 20 years and have been married for 16 years. They have three children named Alex, Olivia and Sam.

Goduti returned to Quinnipiac in 1999 as a Residence Hall Director (RHD). He held this job for about four and a half years. When Goduti and his wife got married, they lived on Quinnipiac’s campus for two years.

“In fact, I carried her over the threshold in The Commons, which is the apartment I was living in when I was a Hall Director,” Goduti said. “We spent the first year of our marriage there.”

Goduti and his wife also lived in the Mountainview residence hall. Students would come over for dinner with the newlyweds all the time.

During this time in 2000, he started teaching part time at Quinnipiac and went on to earn another Master of Arts in history, with a focus on American foreign policy, from the University of Connecticut.

Furthermore, he has been a freelance reporter for the Hamden Chronicle and the Providence Journal Bulletin.

Today, he still teaches history at Quinnipiac and Somers High School and has written the books: “Kennedy’s Kitchen Cabinet and the Pursuit of Peace: The Shaping of American Foreign Policy, 1961–1963” and “Robert F. Kennedy and the Shaping of Civil Rights, 1960-1964.” Another book of his, “RFK and MLK: Visions of Hope, 1963-1968,” is set to come out this year.

Quinnipiac taught Goduti more than just history. By attending and working at Quinnipiac, he said has learned many problem solving skills.

For instance, as a RA and RHD, Goduti learned how to resolve roommate issues or manage a crisis. These skills have allowed him to foster a safe classroom environment, which encourages students to challenge beliefs and explore ideas.

Teaching at Quinnipiac has been interesting for Goduti. He likes that he has gone through the same courses and professors as his students. Slowly, that is not becoming the case anymore.

“There’s still a lot of professors there that I took who really shaped me… and helped me in a formative period of my life,” Goduti said.

It has been fun for Goduti to watch Quinnipiac change throughout the years.

“From a history department perspective, I do not think it has changed all that much,” Goduti said. “Our courses are still pretty small when you get to the higher level courses. So you still have that personal interaction with the professor.”

However, Goduti said that the University itself has grown immensely. There are three campuses now, and he cannot imagine being a student who has to make this commute.

Part of that growth is due to President Lahey. Watching Lahey’s leadership and watching him realize his vision as president has been quite fascinating, according to Goduti.

However, Goduti believes that Quinnipiac has remained true to its roots.

“Quinnipiac University still has a lot of the same charm that Quinnipiac College did,” Goduti said. “And the professors still know who you are, and you still have the ability to do wonderful things in that environment.”

Junior Sarah Wiederecht, a history major enrolled in the MAT program, admires Goduti because he is a supportive and funny individual.

“He’s always there to help his students,” Wiederecht said. “You don’t feel like a number in that classroom. You feel like you’re an actual history student, regardless of what your major is.”

Wiederecht said that Goduti has helped her plan her future and is helping her with her thesis. Since Goduti is a high school teacher by day and an adjunct professor by night, he has been guiding Wiederecht into that career path.

When Wiederecht does her field study work, she said that she tries to base some of her teaching styles off of Goduti’s work.

“He’s so easy to talk to,” Wiederecht said. “But he’s also brilliant when it comes to his subject matter.”

Needless to say, Quinnipiac has been quite influential in Goduti’s academic growth, as well as in his personal growth.

“I still root for the Bobcats, and I wear Quinnipiac ties to work,” Goduti said. “Even though I went to school at Providence College and UConn for other degrees, I still see Quinnipiac as a special place when it comes to where I came from.”