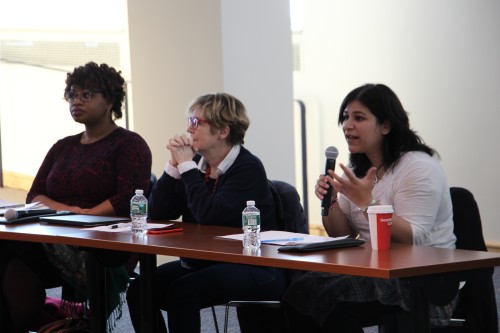 The discussion “Human Rights of Minority Groups: Political, Legal and Activist Perspectives,” included Assistant Professor of legal studies Sujata Gadkar-Wilcox, Professor of philosophy Anat Biletzki and Associate professor of political science Khalilah Brown-Dean. The panel was student-run and talked about the panelists personal experiences and backgrounds in advocating for human rights for minorities.

Gadkar-Wilcox, the first panelist to speak, talked about how her father’s past had influenced her interest in law and human rights. She explained that her father grew up in a very poor and vulnerable village in India. However, through an affirmative action program, he was able to move to America and pursue a career in engineering

“For me, legal remedies are particularly important,” Gadkar-Wilcox said.

She said that when examining our current human rights legal system, it is important to be aware of the social, political, economic and historical contexts.

“In whose voice are we speaking when we write down those rules?” is a question that Wilcox said is important to examine when it comes to laws concerning human right

Although there are many laws protecting human rights, some of those laws exclude minority groups and often benefit the “dominant narrative” and not the people in need, according to Gadkar-Wilcox.

The idea that the people in power implement laws that benefit the dominant social group instead of the vulnerable, was further expanded upon by Biletzki.

Biletzki discussed her observations on human rights and the law while living in Israel. She explained that the Palestinian people who occupy parts of Israel are discriminated against and treated unfairly by the law.

Biletzki said the 4.5 million Palestinians who occupy the West Bank and Gaza in Israel have no citizenship and are considered stateless, while the 600,000 Jewish settlers are protected by the law.

“Minority is not a matter of number, majority or ratio. Minority is the victimized group,” Biletzki said.

The most extreme discriminatory law that Biletzki has come across states that 93 percent of the land of the state of Israel cannot be bought by anyone other than a Jew.

She explained that this law means that 20 percent of the population cannot buy an apartment, house or live on land that is by law only for Jews.

Biletzki said that this example is a direct representation of how the human rights of minorities can be violated when the law is created by and in the interest of the prominent social group.

Brown-Dean, the last speaker, added to what Gadkar-Wilcox and Biletzki talked about in regards to the human rights of minorities.

Brown-Dean stated that the law cannot be fair if it ignores the interests of minority groups. A solution to this problem is what Brown-Dean stated she wrote about in her article “Building Authentic Power: A study of the Campaign to repeal Connecticut’s death penalty.”

Brown-Dean explained that the phrase authentic power “relates to the extent that a group harmed by a policy can get policy-makers and other government officials to acknowledge this harm and, ultimately, to change the policy to the groups benefit.”

Brown-Dean described the 2012 campaign to repeal Connecticut’s death penalty as an example. She stated that the murder victims’ families and communities of color who participated in the campaign were what lead to success. By taking action the minority groups in this situation were able to persuade those in power to change policy in a way that would benefit them.

Brown-Dean explained that this example represents why building authentic power is necessary for the survival of minority groups.

“Building authentic power in a community is the first the step towards equality for minority groups. “Without it the vulnerable will not be represented by the law,” Brown-Dean said.