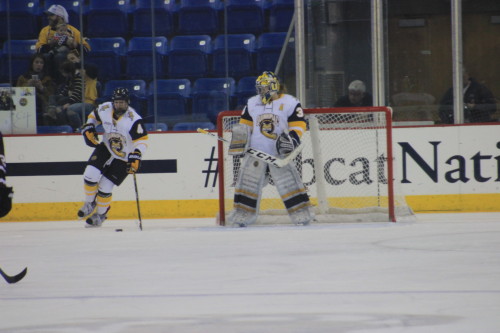 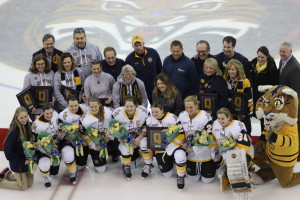 The seniors of the Quinnipiac women’s ice hockey team put a close to its regular season endeavors with a nail-biter, holding off Union College for a dramatic 1-0 victory on Saturday afternoon.

“They are going to be the most winningest class in our program’s history. A lot of character. Great leadership. Every single person in that class is a captain of their team and we’re really gonna miss this group of seniors,” Quinnipiac head coach Cassandra Turner said.

With this shutout, senior goaltender Sydney Rossman reached a milestone by reaching a total of 26 career shutouts and breaking the program shutout record.

“Personally it’s huge. Obviously it’s cool to have milestones here in the program especially senior year, but it’s more of a team award,” Rossman said. “I only got 10 shots today, so that’s a team defense thing, and i think shutout record isn’t just my record. It’s the team’s record.”

Rossman spent most of the game waiting for the action to come her way as she stopped all 10 shots she faced on the night for the shutout.

While it can be difficult to keep focus and a sudden scoring opportunity could arise at any time, Rossman has her own mental strategy for scenarios like this. 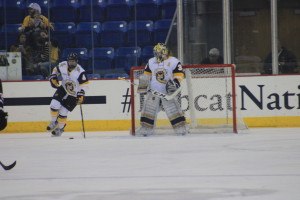 “I try to take the game in five-minute increments. If I can do my job to make a difference on the ice every five minutes, I’m gonna give my team a good chance to win,” Rossman said. “Whether it’s stopping the puck behind the net or using my voice to communicate with the D, that’s kind of how I stay in it and our team takes care of the rest.”

The final score of the contest proved to be quite deceiving, as the game was kept close thanks to Union netminder Amelia Murray. The Bobcats (20-8-6 overall, 13-6-3 ECAC) outshot the Dutchmen (5-28-1 overall, 2-19-1 ECAC) 50-10. Murray welcomed the Bobcats’ barrage by responding with 49 saves in the game.

As frustrating as it was for the Bobcats, who were unable to convert most scoring chances they could muster, the team took an opportunistic approach to the scoring struggles.

“We really had that [positive] mentality on our bench. I think they knew they had enough,” Cassandra Turner said. “We clearly had that one goal, which was enough to win and they wanted to continue to fight to get a goal but they were gonna do everything they could to keep the puck out of our net too.” 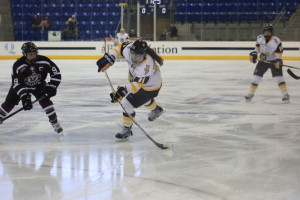 Quinnipiac freshman Abby Cleary scored the lone goal in the contest at 9:04 of the second period. Cleary capitalized by burying a juicy rebound off a Murray pad save. The goal didn’t only prove to be the game-winner, but it was also the first of Cleary’s career.

“It was great to get the first one off my back, but it was really nice to do it for the seniors and get that win going into the playoffs,” Cleary said.

Coming into the third period, Quinnipiac really put its foot on the gas in generating offense. It outshot Union 18-2 in the period, but could not find twine. Quinnipiac captain Emma Woods had the opportunity of the game with a rebound on a wide-open backdoor, but Murray made a sensational diving save to slam the door.

Union pulled Murray for the man advantage, but it failed to penetrate the Bobcat defense and find a solid scoring opportunity. Quinnipiac senior Meghan Turner stole the puck for a breakaway on the empty net in the waning seconds of the game, but her diving shot squeaked off the right post wide to keep the final score at 1-0.

“We’ve had so much adversity this year in terms of having those one-goal games and I think it’s going to bode well for us in the playoffs because we’re not comfortable in those moments and you saw that today,” Cassandra Turner said.

The Bobcats end their regular season in fifth place of the ECAC standings with a total of 29 points as they head into league playoffs to face Princeton next weekend.