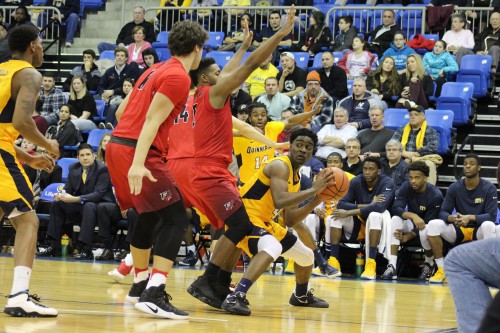 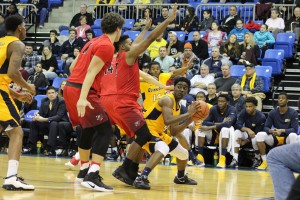 The Quinnipiac men’s basketball team fell 89-86 to Fairfield in overtime on Saturday night at Lender Court.

On Feb. 6 at Fairfield, the Bobcats beat the Stags 73-71 on a last-second shot by freshman Peter Kiss. Just 11 days later, Fairfield got its revenge.

A Kiss dunk sparked a big Quinnipiac run late in the second half after the Bobcats trailed 73-61 with 5:47 to play. With just 31 seconds remaining, Quinnipiac took its first lead, 75-74, since the 16:57 mark of the first half when Kiss, who finished with 17 points and nine rebounds in 43 minutes of action, dropped in a layup.

In what appeared to be the play of the game, Kiss rose up and pinned a seemingly open Fairfield layup off the backboard. He was fouled on the ensuing possession and made both free throws.

After Quinnipiac fouled with 4.7 seconds left to keep Fairfield from shooting a tying three, the Stags’ Curtis Cobb made both of his free throws to bring his team within one. Phil Winston was then fouled with only 3.3 seconds to play, but only made one of two shots. 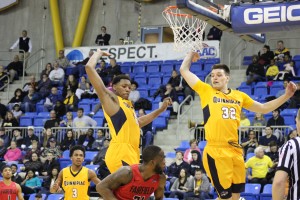 “At the end of the game there’s a lot of emotion and chaos,” Quinnipiac head coach Tom Moore said. “This group is still just trying to figure out what to do in situations like that.”

The overtime period did not go well for the Bobcats as they never led, and Fairfield pulled away to a 89-86 win after Kiss missed a deep, but open, three to tie the game.

Nelson dominated the game early and often. He had 10 assists in the first half for the Stags, as the Bobcats executed their gameplan of limiting his shot attempts.

“We tried to deny him as much as we could,” Harris said. “Just tried to get the ball out of his hands as much as possible. He dished it to other people and they just made shots.”

In the first 4:06 of the game, the team traded the lead five times, before Fairfield took over. After that point, Fairfield built up its lead to as much as 42-26 late in the first half. The Stags maintained their lead and were up 42-30 at the half. 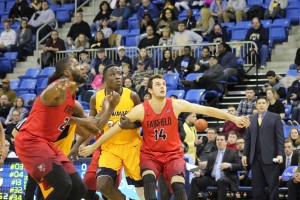 It looked as though the Bobcats would struggle to come back as Nelson continued to dominate the game with his passing. In the second half, Quinnipiac made adjustments, largely based on a four-guard, one-big-man lineup.

“We’ve been trying to work on that lineup more,” Moore said. “I trust those guard options we have a lot. We rolled with that core a lot.”

Freshman Mikey Dixon led Quinnipiac in scoring with 24 points, 20 of which came in the second half. Junior Chaise Daniels added 18 points and seven rebounds. For Fairfield, Nelson finished the game with 24 points and 12 assists.

“We had a couple defensive lapses late where we lost our poise,” Moore said. “But, I played four guys 35 or more minutes, so that didn’t help.”

Quinnipiac will look to bounce back from this loss on Sunday when it travels to face Manhattan.