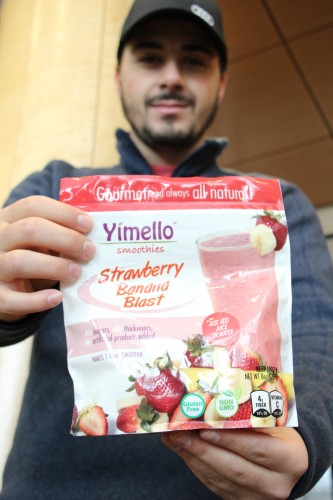 Sousoulas entered the competition with the hopes of impressing the judges with his own original invention. Sousoulas said he thought of his invention during his senior year of high school while working in a food truck alongside his girlfriend.

He became the founder and CEO of his company, Yimello Smoothies. The official website said that they want their customers to experience all the endless health benefits that their smoothies have to offer.

“It’s a single serving frozen smoothie,” Sousoulas said. “It’s all natural, so there’s no additives. The ingredients are just fruit, there is nothing to preserve it and our fruits are [non-genetically modified organisms] and also gluten-free.”

For roughly two and a half years, Sousoulas would make all natural smoothies in his food truck whilst developing this retail product on the side.

Sousoulas said that there were challenges in creating his product throughout the years.

“Thinking of the idea wasn’t the hardest because [my girlfriend and I] were [working at] the food truck, and we saw that people liked smoothies,” he said. “But the hardest was finding all the components, finding a supplier, figuring out how to develop the flavors, logistically how we would be distributing the product around the country.”

Nevertheless, Sousoulas was able to finalize his invention in time to apply for the GSEA local competition in Connecticut.

GSEA is an organization founded in 1998 with a mission to provide student entrepreneurs the chance to boost their success and challenge the status quo.

“[GSEA] is the premier global competition for students who own and operate a business while attending college or university,” according to the official GSEA website.

Sousoulas said his professor, associate professor of entrepreneurship, Dale Jasinski, sent him an email about the GSEA, telling him to apply for the competition if he was interested.

Jasinski said he knows Sousoulas to be an incredibly humble and passionate person.

“It is obvious that he knows the value of hard work from his family and is driven to succeed for the right reasons,” Jasinski said. “It’s not about the money, it’s about creating a business that provides a product that truly improves the lives of his customers and his community.”

Throughout the competition, Sousoulas had to advertise Yimello Smoothies to a group of judges with a 15 minute PowerPoint presentation and a Q-and-A session, and out of the many state applicants Sousoulas won, securing a spot in the upcoming finals.

The next competition will be the United States National Finals on March 6 in attempts to win a spot to compete in the ultimate GSEA Finals, located this year in Frankfurt, Germany from April 27-29.

Jasinski said Sousoulas will be a great representative of the state of Connecticut for the national finals.

“He won because he knows his product, [and] knows what he wants his business to do,” Jasinski said. “He is good proof that the best way to be an entrepreneur is to be one. Just get started and good things tend to happen if you work hard and listen to your customers.”

Freshman entrepreneurship and computer science major Evan Rigsby is one of Sousoulas’ friends and he said he is not surprised about Sousoulas being a finalist at all.

“He kind of had that demeano,r and he views things long term, his view is not in the present, it’s always in the future,” Rigsby said. “Having that attitude, it’s a clear statement that you know, he’s here to win it.”

Sousoulas’ father, John, said his son always seemed like a mature person for his age and witnessing him grow his company and become a finalist brought immense joy to his heart.

“When you actually see the product you know, the final product, I mean I was literally in tears with how much work over the years he’s put into it, but I couldn’t have been more proud of his accomplishments and mainly of the person he is,” he said.

When it comes to the future of Yimello Smoothies, Sousoulas hopes to present his product to the university.

“I would love to be able to bring my food truck. I know Quinnipiac does some farmers markets or stuff like that,” Sousoulas said. “I’d love to do that, just to share it with my classmates.”

Sousoulas said he found the experience competing at GSEA to be amazing and is looking forward to his progression in the competition.

“I have a lot of faith in myself and my product, but it was not something I usually do so I had a nice outcome that I got to that level, but I didn’t expect to win the one in Connecticut,” Sousoulas said. “It’s just a big, big honor to have been chosen to do this and now to be representing Connecticut in this thing. It’s fantastic.”