‘Break Through to a Better You:’ A campaign for mental health awareness 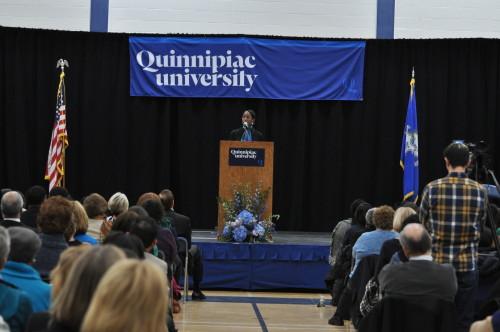 As part of the national Bateman Case Study Competition, for the Public Relations Student Society of America (PRSSA), students of the Quinnipiac Bateman team have developed the campaign, “Break Through to a Better You,” in support of the Campaign to Change Direction.

Through activities, events, music and support, the team hopes to inform the Quinnipiac community of the signs of mental illness along with resources and exercises available to alleviate the stress of everyday life.

PRSSA hosts this competition annually, inviting universities across the nation to become involved in bringing to light a cause in need of public attention.

This year, the chosen organization is the Campaign to Change Direction, which focuses on changing the mental health of America so all of those in need of care receive the support they deserve, according to the campaign’s website.

“[The Campaign to Change Direction] wants everyone to recognize the five signs of emotional suffering,” Kristin DeMauro, senior public relations major and a member of the Bateman team, said. “It’s not necessarily about having a mental illness.”

As part of the Quinnipiac chapter’s efforts to promote the motives of the chosen campaign, the four members of the Bateman team, seniors DeMauro, Meagan Sharry, Helena Clarke and Jamie Chiraiello, have developed a series of activities for students and faculty to participate in throughout the month of their campaign on campus.

Some of these events include tabling in the Carl Hansen Student Center on Feb. 15 from 9 a.m. to 3 p.m., yoga in Burt Kahn Court on Feb. 22 at 9 p.m., a showing of the movie “Inside Out” on March 1 in the Mount Carmel Auditorium and a performance by a band while students eat food provided by Eli’s on Whitney at 6 p.m. the week of March 6, location and day to be determined.

Along with these functions, the team has also created a Facebook page, through which students can check into their mental health and take part in the de-stress playlist on SoundCloud.

“The playlist is really cool because Quinnipiac students contributed to it,” Clarke said. “Before winter break, we set up a table and as students walked by, they wrote down songs they use to de-stress and relax so Quinnipiac kind of actually made the playlist.”

Students will be able to access all of these tools and forms of stress relief located on the Facebook page on Wednesday, Feb. 15 when the campaign launches.

“I feel like the campaign is really important for college students in general because everyone is just stressed out all the time,” Clarke said. “I feel like here [at Quinnipiac] no one really takes time for themselves so that’s our main thing, to educate through the five signs in the events we are having so people can take time for themselves and be like, ‘Am I OK? Am I stressed? How am I doing?’”

Although the target of each campaign varies based on the university participating in the competition, the QU chapter has decided to focus on students and the Residential Assistants (RAs) specifically.

“We targeted students, but we also targeted RAs specifically because we feel they are influential to students here,” DeMauro said. “They’re the ones guiding students so when they are stressed, they’re the people teaching them the five signs. We want to educate the RAs first so the students are reached sooner.”

The team has planned to meet with RAs to supply handouts and inform them of the five signs that might mean someone is in emotional pain or needs help that are recognized as personality change, agitation, withdrawal, poor self-care and hopelessness. These signs are listed on the campaign website with further explanations.

“A lot of this is not just being one in five of those that actually suffers from any kind of mental illness,” Chiraiello said. “It’s not just targeting people who need to go to the school therapist and talk to them about it it’s about people who are maybe having a rough week. It’s really about being able to recognize it as far as a campus community, recognizing it so you can recognize it in yourself, in a friend, in a teacher, or in a classmate.”

The Bateman team will continue their campaign from Feb. 15 to March 15 until their required submission of the results of their outreach and success as a campaign are to be presented to the national panel of judges. The judges will ultimately chose the top three competitors, and then the winner of the competition.

“The long-term goal is [the team is] going to kick off this campaign at QU, but what they hope to do is change the culture after March 15,” Hillary Fussell-Sisco, academic advisor to the Bateman team and chair of the department of strategic communications, said. “Then, the five signs are a part of RAs training; it’s part of everybody at Quinnipiac so that they understand if anyone is feeling the strains of emotional of health they have the resources to go to.”