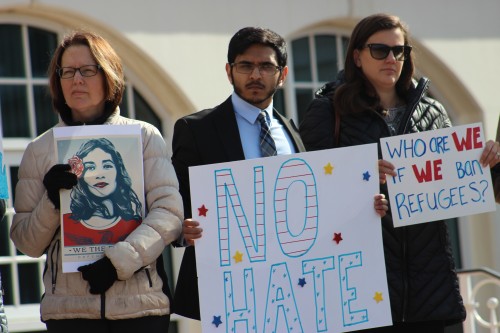 Approximately 70 students, faculty and staff lined the Arnold Bernhard Library steps from 11:45 a.m. to 1 p.m. to participate in a silent vigil, put together by a group of faculty and students.

The silent vigil gave members of the community an opportunity to stand in solidarity with immigrants and refugees who have been affected by President Donald Trump’s executive order to ban against immigrants from Iraq, Iran, Libya, Somalia, Syria, Sudan and Yemen from traveling to the United States.

Assistant professor of English Kim O’Neill passed out pamphlets with information on the executive order, how members of the community can learn more and help take action against the ban. President of Muslim Student Association (MSA) Ayah Galal said the flyers were passed out to educate passersby on the executive order and clear up any misconceptions people may have.

O’Neill was proud of the students and faculty for coming together and showing how much they care about the issue.

“I wanted to show our students who feel vulnerable, who have been threatened by both policy and by the hate speech that has been exacerbated by the change in administrations; I wanted the students to know that we care,” O’Neill said. “We support them and we will put ourselves, our bodies on the line. I am happy to do whatever I can, and I’m not alone.”

Galal is pleased with the turnout of the vigil and said she is participating because she thinks the executive order is un-American.

“I think it’s unconstitutional [because] it discriminates against Muslims,” she said. “It feeds into islamophobia and anti-Muslim rhetoric, and I think it’s unacceptable. I’m here today to take a firm stance against that to say that is not okay, that is not who we are as Americans and we will stand against that.”

Many prominent figures from the university participated in the vigil as well, such as Vice President and Provost Mark Thompson, Rabbi Reena Judd, Father Jordan Lenaghan and Associate Vice President for Academic Affairs and Chief Diversity Officer Diane Ariza. Members of the Department of Public Safety, including Chief of Public Safety Edgar Rodriguez, also attended the vigil.

For Ariza, the vigil was an opportunity to show the community coming together on in support of the Muslim populations that have been affected by the ban, as well as refugees.

“I have my personal convictions about [Trump’s ban] because it is one that has created a sense of fear and marginalized communities,” Ariza said. “It goes against our values as a nation. It was very clear that while Trump said, ‘This is not anti-Muslim,’ the discussion that followed the executive order was very much targeting Muslims in seven countries and not others.”

Thompson said it is important the university shows support for those affected by President Trump’s executive order.

“I think we have an obligation to know they are a valued part of the community,” Thompson said. “It’s another example of a way to bring a current issues to the forefront of discussion, and it’s another opportunity for different viewpoints to be heard and give us the chance to talk with one another and learn from each others perspectives.”

Student Government Association Senior Class Representative Chris Desilets participated in the vigil and said this executive order hits close to home for him since his mother immigrated to the United States.

“I think it is sad we live in a time in our country where there are people that are worried that the country doesn’t believe that they belong,” Desilets said. “I think it is good that students get to see that there are other students on this campus that are willing to stand with them and stand for them of all different grades, nationalities, colors, and I think that is very important.”

Assistant Professor of Anthropology Julia Giblin said she participated in the vigil to show support for students and faculty on this campus affected by the ban.

“I wanted to be here to support faculty and the students on campus who are feeling worried or threatened about this executive order and how it impacts people in our community who may not be protected,” Giblin said.

Sophomore Caroline Sullivan was walking by the vigil and eventually decided to participate. She thinks the protest is great because it is peaceful and respectful which is appropriate for a college campus.

“It is happening all across the country and I think it is important that students are expressing their opinion towards what is going on in our government,” Sullivan said. “It is important for this country to have this voice among it’s citizens.”

Giblin said that the vigil demonstrated how the faculty and students care about one another and show that there is hope when we all get together.

“I wanted to promote thinking about understanding and openness versus exclusion and building walls or bans on people who enter the country,” she said.