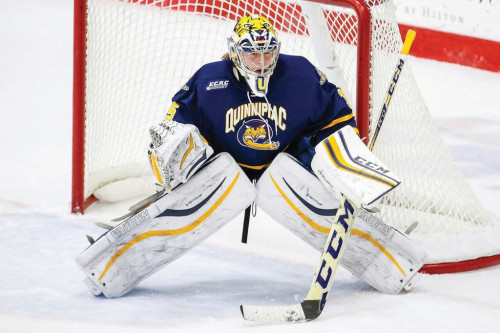 Quinnipiac women’s ice hockey senior goaltender Sydney Rossman is down to playing her last games in a Bobcat uniform. So who will be left to fill her position in the crease for the Bobcats? Abbie Ives. 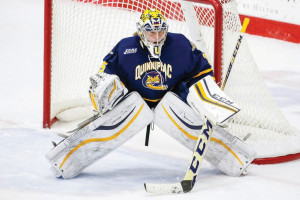 Over the course of this season, Ives has worked her way up the ranks and has even started several games in goal for the Bobcats.

Cassandra Turner, the head coach for the women’s ice hockey team, had a lot to say about her freshman goaltender. However, if there was anything Turner stressed about Ives, it’s that she lives and breathes ice hockey.

“She’s the kid who knows every save that every NHL goalie made last night,” Turner said. “I don’t know if I could keep up with that. It’s pretty amazing.”

This season, Ives has appeared in six games and has started three of them. She has faced 59 shots, and has stopped 58 of them. All three of her wins this season have been shutouts, and she has not lost a game yet.

Rossman, on the other hand, has made a name for herself over the past four years in women’s ice hockey. Last year, Rossman was the ECAC Goaltender of the Year. Rossman has carried most of the momentum from an award-winning year into this season as well with 15 wins, a 1.53 goals against average and a .919 save percentage. She holds the all-time records in save percentage (.946) and goals against average (0.95). Rossman is also ranked in the top five all-time for Quinnipiac in shutouts (24) and wins (34).

Ives considers herself lucky to be the backup to Rossman because she feels as if she’s learning from a great mentor.

“It’s the best situation you could have as a freshman because you get to learn the ropes from somebody and have a mentor to guide you,” Ives said. “I’m really blessed to have that opportunity and I’m really grateful to have [Rossman].”

Those who follow Quinnipiac women’s ice hockey may know who Rossman and Ives are, but a lot of people forget about the team’s third goaltender- freshman Claire Lachner. Even though Lachner has not appeared in a game all season, she has made a significant influence on Ives’ development off the ice as well.

“Claire has been really helpful for me, especially in the weightroom,” Ives said. “We’re on the same rack, and if she sees me doing something wrong, she’ll correct me and it’s so helpful to have her there.”

Ives went on to explain that the Bobcats would not be a complete team without teammates like her.

“[Lachner] really knows the game well,” Ives said. “She knows all of the responsibilities that you have on the team and she’s helped me out alot with that. She’s really supportive and a good friend to have.”

According to Turner, Ives seems to look up to both Lachner and Rossman because that is just the type of person she is. 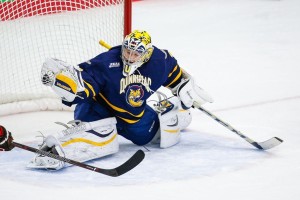 Even though Ives mentioned the whole senior class as role models, she only went more in depth on senior forward Mika Nervick.

Nervick, like Lachner hasn’t appeared in any games this season, but in the eyes of Ives, it doesn’t matter how many games you play or how much ice time you get a game. It’s all about being a good teammate and a role model both on and off the ice. Nervick has been an example of a good teammate as she has been named a finalist for the 2017 Hockey Humanitarian Award, which is given to a player that gives significant contributions to their team and community via leadership and volunteering.

Even though the Bobcats will be losing their two-year starting goaltender in Rossman after this season due to graduation, Turner has high hopes for Ives in the future.

“Quinnipiac has been synonymous for good goaltending and strong defense,” Turner said. “If you look across the span of time that we’ve been here, you’re going to see our scoring defense in the top five pretty consistently over the last eight or nine years.”

Ives still has a long college career ahead of herself. There will be ups and downs in her next three years as a student-athlete and not every game will go her or the team’s way, but her coaches and teammates have faith in what she is capable of accomplishing.

“No matter what, I’m going to work really hard, and we’ll see what happens,” Ives said.