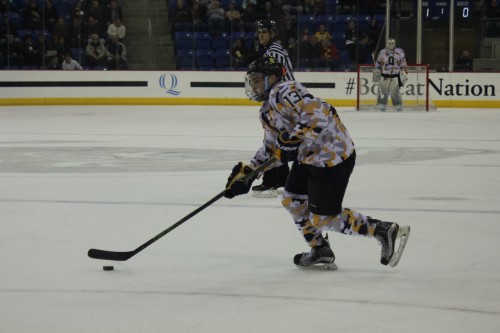 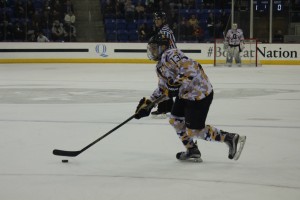 No. 19 Quinnipiac men’s ice hockey dropped a close game to Clarkson by a score of 4-2 on Friday night at High Point Solutions Arena. With the loss, the Bobcats fall to a 16-11-2 overall record and 10-7-1 in ECAC play while the Golden Knights improve to 13-21-4 overall and 8-7-2 in conference play.

“It was frustrating on our part tonight,” Quinnipiac head coach Rand Pecknold said. “We had some guys that were really good tonight and a few that just really struggled and lost us the hockey game.”

Some of that “good” play began early on for Quinnipiac, when defenseman Chase Priskie fired home his seventh goal of the season just 3:16 into the first period. Priskie’s tally was his fifth goal in as many games, adding on to impressive two-goal performances against Arizona State on Jan. 27 and Yale on Feb. 4.

After that, Quinnipiac continued to out-possess and offensively overpower Clarkson in its best period as the team finished the first frame with 17 shots to Clarkson’s 9.

“I thought we played three games tonight,” Pecknold added. “The first period was really good, I thought the second period was unacceptable and the third period was good from a compete level.” 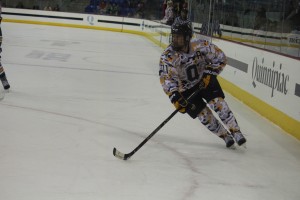 Tim Clifton’s tripping penalty with six seconds left in the first period extended into the second for Clarkson and the Golden Knights were able to capitalize just seconds after Clifton stepped out of the box.

Clarkson defenseman Aaron Thow scored his second of the season with a bomb from point-blank range to even up the score at one apiece.

The ensuing shift, Priskie was the victim of a hit from Golden Knight’s forward A.J. Fossen, who was subsequently given a five-minute major penalty for hitting from behind and ejected on a game misconduct call.

With the situation in Quinnipiac’s favor, the Bobcats were still unable to generate scoring chances and convert on the elongated power play.

This would be the turning point of the contest.

“We get the five-minute power play and we don’t capitalize,” Priskie said. “It’s a big momentum swing when a team can kill five whole minutes and that’s what they did… they just kept feeding off of momentum.”

Now a team with a purpose, Clarkson managed to fire home its second goal of the night, this time coming off of defenseman Greg Moro’s stick with just 36 seconds left in the period. 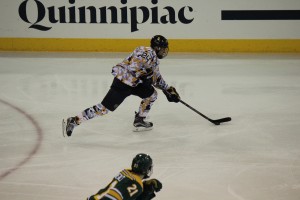 Moro wound up from the point and the puck made its way through a sea of bodies and into the back of the net to increase the Golden Knights’ lead to 2-1 at the end of two.

Hoping to rebound from a disappointing period, Quinnipiac began the third frame in a discouraging manner.

Three and a half minutes in, Clarkson forward Sam Vigneault ripped the puck off the post, then a wide open James de Haas scored his fifth of the season on an essentially empty cage.

After back-and-forth play for the majority of the third, Quinnipiac found another goal from a defenseman. After a chaotic scene in the crease, Kevin McKernan fished the puck and scored his third goal of the season to make the game 3-2 with 12:18 to play.

McKernan’s timely goal was a visual reward for playing consistent defense on a night-to-night basis.

“I’m really happy with Kevin [McKernan’s] year,” Pecknold said. “He’s chipping in offensively. He gets up in the rush. He’s been a really good player for us.”

While the goal put the Bobcats within reach of a tie, Pecknold pulled freshman goalie Andrew Shortridge with just over three minutes remaining.

A strong push in the offensive zone was there, but the goal was nowhere to be found when it counted. 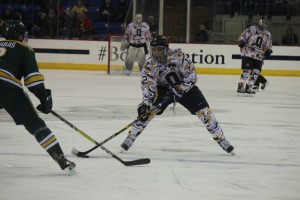 Clarkson’s Vigneault potted an empty-netter for his eighth of the season and a solidified 4-2 victory for the Golden Knights in an important ECAC matchup.

Quinnipiac will get Saturday night off this week and pick things up again in ECAC action against Union on Feb. 17 at Messa Rink in Schenectady, New York.