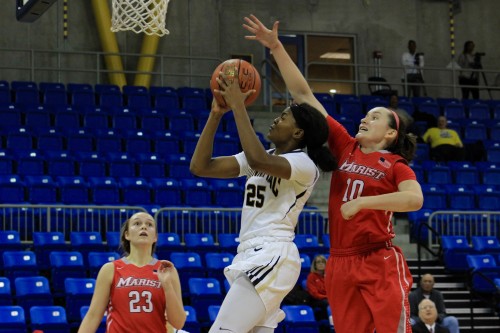 The snow proved to be no obstacle for the Quinnipiac women’s basketball on Thursday as it put the foot on the gas to prevail in a 79-57 decision over Marist and sweep the week’s pair of games. 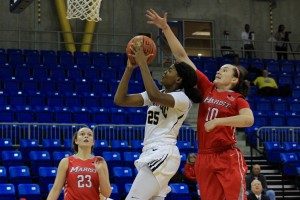 As TD Bank Sports Center was pummeled with snow prior to tip-off, the Bobcats were just hoping to stay focused and not let the inconvenience of the inclement weather affect their play on the court.

“You just worry this deep in the season how a snow day is going to affect you,” Fabbri said. “When you get into routines, you know, I say all the time I don’t like to think I’m superstitious and it’s like the complete opposite. We get the young ladies up here today and you’re sitting here waiting for the game, and you don’t know how that’s all going to play out and it is Marist, it’s a big game regardless.”

The Bobcats had been coming off a tough week of back-to-back losses heading into this weekend’s pair of games and were hoping to rebound with two wins to maintain first place in the MAAC. 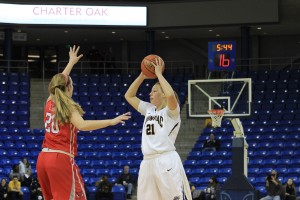 “I just liked our fight and our execution for 40 minutes, and coming off a week where we weren’t at our best and how we’ve answered,” Fabbri said.

The Bobcats once again proved who owns Lender Court as they added another win to their 10-1 home record against a strong road team in Marist.

Leading the Bobcats’ to the dominant victory was the strong play by sophomore forward Aryn McClure, who led the team with 16 points on the night, along with sophomore forward Jen Fay and senior guard Adily Martucci, who both tallied 14 points apiece. The Bobcats were able to sink an impressive total of 14 three-pointers in the contest. The balanced scoring in the Bobcats’ starters is one of the key reasons they have reached success this season. 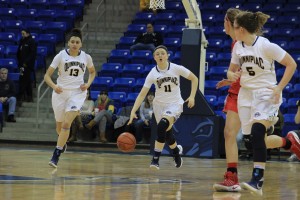 Everyone on the team agrees that the key to scoring consistently is being comfortable with the ball and not passing it out of panic.

“The past couple games we kind of didn’t want to shoot it, so now we’re being more aggressive with it and just shooting confidently,” Martucci said.

McClure, who went 7-14 from the field in the game, struggled a bit putting the ball in the hoop in the first half, but she turned her fortunes around in the second and was the leading force in the Bobcats’ acceleration in the latter.

The Bobcats prepare to improve their road play and hold the lead in the MAAC as they head up north to play Siena on Sunday.