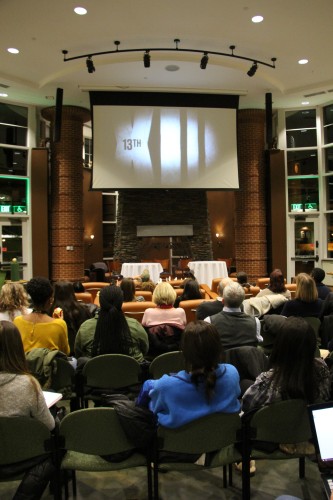 Directed by Ava DuVernay, 13th is a documentary that features various professors, politicians and activists talking about the issue of race in the criminal justice system. The title refers to the 13th Amendment of the U.S. Constitution, which abolished slavery, and the film’s narrative based around the wording of the amendment.

“13th” went into detail about many topics, including the increasing prison population, how the criminal justice system may disproportionately affect minority communities and the profitability of privately run prisons.

Bobby Johnson is an African-American man who served eight years for a crime he didn’t commit because he decided to confess before going to trial. Meyer spoke as part of a panel on Thursday, Feb. 2, analyzing the film “13th.”

“[Bobby Johnson] didn’t think he had a chance. He didn’t think there was gonna be justice… and that just broke my heart…that people [put] so little trust in the justice system,” Law professor Linda Meyer said about the story of Bobby Johnson.

As for the event, the movie was shown in the Carl Hansen Student Center Piazza and was followed by a discussion. Along with Meyer, the panel consisted of professors Michael Chiarappa, Philip Cunningham, Thornton Lockwood and professor Kathy Cooke as moderator.

During the panel, the professors discussed what was wrong with the criminal justice system and what needed to be changed. One point that they referenced throughout the discussion was about bringing awareness to everyday people.

Early on, Meyer showed a collection of books dealing with subject matter similar to the movie, in a drawn out manner that the audience politely laughed at, to make the point that there was so much information that wasn’t getting out there, despite all the books.

Later, Chiarappa argued that politics gets in the way of understanding issues related to criminal justice.

“If more Americans were aware of the issues of race relations, class relations… [they’ll] call the politician’s bluff and say ‘Hey, we shouldn’t be talking about this; this isn’t the issue,” he said.

Cunningham, a communications professor, added to the point of “literacy” through pointing out the importance of technology in shedding light on tensions between police and minority communities.

“Because we have the mobile phone, we can see these incidents occurring more and more. It’s far more difficult now than before to deny that it’s happening,” he said.

On the subject of new technology, “13th” is a Netflix-exclusive film. For saying a message that isn’t the most marketable in a traditional setting, Cunningham feels that DuVernay’s choice to distribute through Netflix “puts her ahead of the curve.”

“She is, and a lot of people are, recognizing that Netflix is the new wave. It’s really changing the way we view film,” he said.

Senior Kael Miller, who was one of 40 to attend the event, feels that due to “13th” being a film, it is more approachable way to be informed.

“I think it comes back to the fact that you see it… You’re more likely to stumble upon a video or a documentary than you are a book and actually pick it up and read it,” she said.

Before the screening, Cunningham said that he saw the film once before but wasn’t able to finish it due to emotions related to the recent election. Upon finishing it, he feels that it was a powerful film to watch, based in part on its visual storytelling.

“Overall, I found it to be a particularly compelling film, although I think particularly toward the end, was really, really difficult to watch,” he said

Junior Caroline Carpenter was surprised by the depth of the issues.

“We just know a small blurb of what actually goes on. There were so many names up there I had never heard of. There’s videos of people being killed… it just shows you how little emphasis there is on it,” she said.