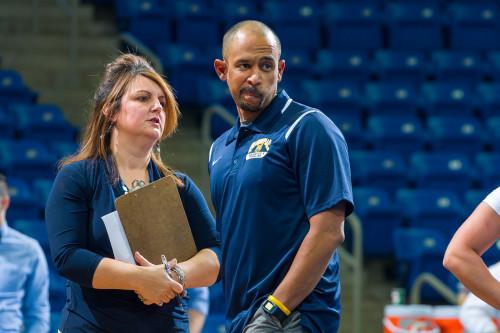 “He always knew what to say.”

That is what junior member of the Acrobatics & Tumbling team Grace Manthey said about the assistant coach Manny Bonilla.

“As a coach that is really important, but as a person it’s sort of exceptional,” she said. “At the beginning of every practice he would write an inspirational quote on the board and that always really helped rally us.”

Bonilla passed away on Feb. 5 after battling cancer, according to a MyQ announcement. He was 39 years old.

Bonilla was born in Santo Domingo, Dominican Republic, according to his obituary. He not only coached the Acrobatics & Tumbling team at Quinnipiac, but also the C.A.T.S. Gymnastics team in Cheshire.

Head Acrobatics & Tumbling coach Mary Ann Powers said in the announcement that Bonilla will be missed for his kindness, integrity and leadership.

“Manny was the blueprint for what all coaches should aspire to be,” Powers said. “He coached our student-athletes beyond their athletic ability and set them forth to make a difference in all their endeavors. His positive impact was widespread in both the local and regional gymnastic and competitive cheer community.”

Bonilla was still active during his treatment and was involved in several cancer-awareness initiatives, while members of the Quinnipiac community raised money for the “Miles for Manny Fund,” to help pay for his treatment, the MyQ announcement said.

The fundraiser collected $2,630 for Bonilla with 62 donations, according to the Miles for Manny page on GiveForward.com.

Manthey said one of the most amazing things Bonilla did was to always be there for the team even while going through treatment.

“He was in the hospital, and we would send him videos of us and he would send us, corrections and things we could do to improve,” she said. “I know that that kept him going, but it also motivated us because if he can do this, then we can do this.”

The MyQ announcement said Bonilla played a part in helping the Acrobatics & Tumbling program to become one of the best in the country. He also had a profound effect on student-athletes, coaches and staff who worked with him. Bonilla joined the coaching staff in 2012 and helped Quinnipiac to two National Collegiate Acrobatics & Tumbling Association National Championship semifinal appearances.

Many people who knew Bonilla said he was simply “the best,” according to his obituary. He is survived by his wife, Kathy Bonilla, his son, Ohanis Manuel Bonilla, and his daughter, Aylanie Sujey Bonilla.

One of Manthey’s favorite memories of Bonilla was that he always called her “Alaska,” since that is where she is from.

“It was one of the first days we were back from Thanksgiving break, and I was landing my full and a halfs really good that day,” she said. “I remember he goes, ‘You’re not baked Alaska anymore, you’re smokin’ Alaska!’ and that was one of the coolest things anyone has ever said to me,” Manthey said.

Manthey said the team is pushing forward in Bonilla’s memory because that is what he would’ve wanted.

“He would want us to do what we know how to do and that is what is getting us through,” she said. :He wouldn’t want us to be sad or do nothing because he definitely didn’t do nothing even though he could have.”

The funeral services will be held on Feb. 8 at 6 p.m. at Casey’s Eastside Memorial Funeral Home in Waterbury, Connecticut. Family and friends may visit Bonilla’s family between 3-7 p.m.