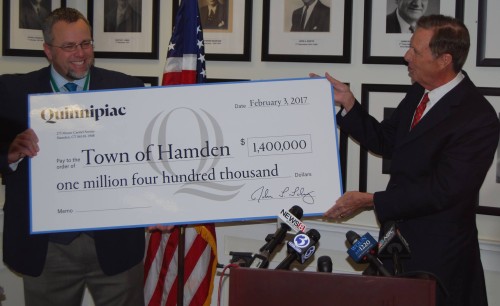 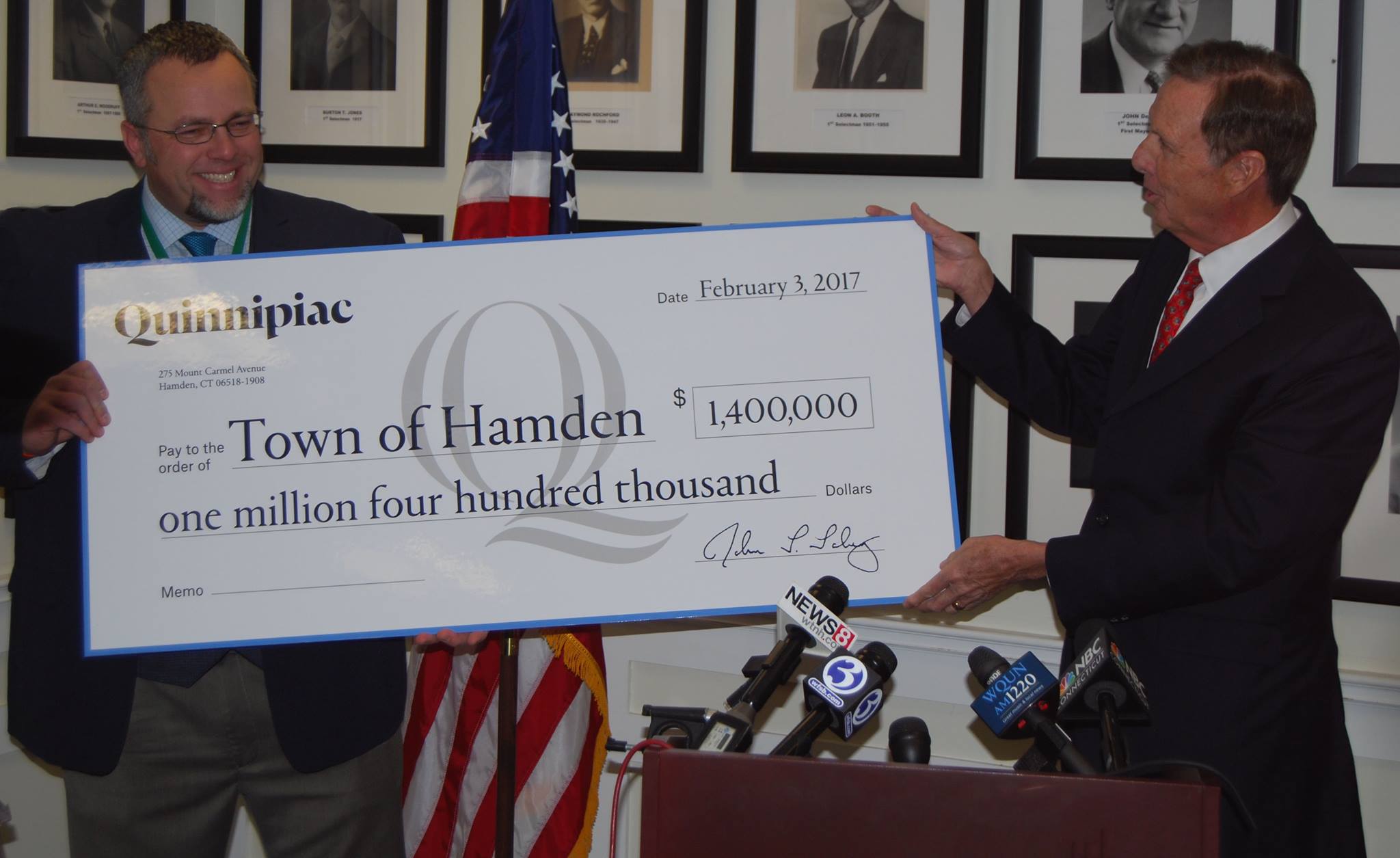 President John Lahey announced multiple changes for the university at a Feb. 3 press conference, where he presented Hamden Mayor Curt Leng with a check for $1.4 million. These changes include adding a new residence hall to the York Hill campus, the return of the Hamden shuttles and commercial renovations on Whitney Avenue.

As Lahey said in the past, the university’s relationship with Hamden was not always positive. But Lahey and Leng agree that the town-gown relations are currently the best they have ever been.

“Quinnipiac and the town are on better footing right now than we have been in a very long time, and that is a great benefit to the university and to the town,” Leng said at the press conference.

Lahey said the university is giving the town $1.4 million in addition to the $3.1 million the town will receive for the Payment in Lieu of Taxes (PILOT) plan for the 2016-2017 fiscal year. This money will go towards the town’s budget and will also support the arts and culture programs in Hamden, according to Leng.

Sophomore Kirsten Guerette said she thinks giving back to the town is necessary.

Lahey also announced there are plans to build another residence hall located on York Hill. He said this residence hall will be specifically for seniors and will raise the number of beds on campus to 17,000. He said this plan should be finished and presented to the town for approval by the spring.

“We think it will attract students back from the neighborhoods and onto our campuses,” Lahey said. “This will address, too, the concerns of having students living in non-university-owned housing.”

Sophomore Olivia Helker lives on the York Hill campus and thinks it is important for the university to build more housing, but she wishes the university would address issues such as providing more parking and shuttles for students.

“It’s definitely good that they’re building more residence halls on campus because they are accepting more students,” Helker said. “But at the same time, they are going to have to figure out something with parking or more, shuttles because even with the amount of people that are on the York Hill campus now, people still have to push and shove to get on a shuttle, and it’s ridiculous.”

Lahey also said these apartment complexes will also house accommodations for Fraternity and Sorority Life to reside and hold meetings.

“These will not be fraternity houses. These will be apartments and units that we will encourage these members to have as residences and meeting spaces,” Lahey said. “They need large meeting spaces for events that they have, which we cannot accommodate on our campus. This facility will have space built into it for this purpose.”

Helker said this is good for students who want to utilize the Hamden shopping centers.

“It’s so much closer than the 25-minute drive to North Haven,” Helker said. “So if you need to pick up some groceries real quick, it’s a lot easier to go to Hamden than to North Haven.”

Lastly, Lahey announced that the university will be landscaping the areas where the historic houses on Whitney Avenue were demolished into a commercial area for businesses to reside.

“In the areas where we knocked down the houses… we have very exciting and attractive ways of landscaping it, and the two historic buildings we preserved will fit into that plan,” he said. “We hope to work with the business community to turn the western side of Whitney Avenue into commercial areas that are attractive and our students and residents of Hamden would want to use.”

Lahey said the town-gown relationship has improved because of Leng and his willingness to communicate frequently.

“There’s been a tremendous amount of cooperation and willingness with Mayor Leng to meet with us… and the issues we were talking about included compromising and having a mutual understanding on both sides,” Lahey said.

Leng said he thinks this financial contribution and relationship with the university is a step in the right direction.

“I want to thank President Lahey for taking the time to develop the relationship that he and I have and have today be a page turner in university and town relations and I hope it gets better from here,” Leng said.