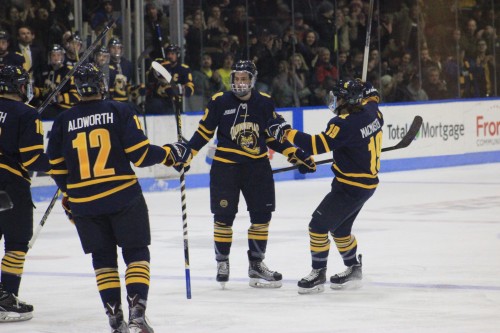 No. 19 Quinnipiac men’s ice hockey took the first of two games in the Battle of Whitney Ave by beating rival Yale, 5-2, at Ingalls Rink in New Haven on Saturday night. 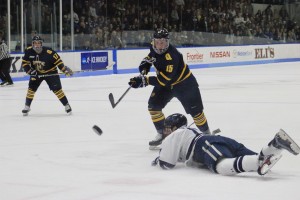 “I’m just proud of the guys,” Quinnipiac head coach Rand Pecknold said. “I thought it was a really good win, great college atmosphere here tonight, both teams were battling hard and we were fortunate to get the ‘W’.”

On the extended power play, sophomore Chase Priskie ripped a one-timer past Yale goalie Patrick Spano for his fifth goal of the season. While Quinnipiac generated scoring chances, Priskie’s goal was the only tally within the five-minute man advantage. 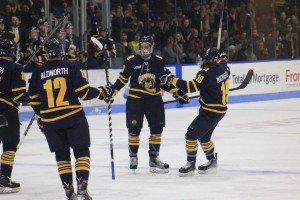 In the second period, it was Yale’s DiChiara who scored first again. This time, he beat out Quinnipiac freshman Brogan Rafferty in the neutral zone and wrapped-around a shorthanded goal for his second of the night, but less than three minutes later Quinnipiac struck back.

It was Priskie again. On the power play again.

His sixth of the season and second of the night came from a similar slap shot from the top of the blue line that beat Spano’s high-blocker side on the man advantage.

“[The] four other guys on the ice, they do their job tremendously and are able to find me in open position,” Priskie said. “I just try to get the puck on net, hope it rattles around and put one in the back.”

After a minimal lull in play, the Bobcats took their first lead of the night off of Nick Jermain’s first collegiate goal. Jermain streaked down the right half-wall, made a quick outside-inside move on the defenseman and tucked the puck past Spano to silence the Yale crowd while giving Quinnipiac a 3-2 lead. 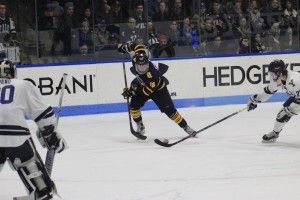 The Bobcats came into the final period of play looking for additional offense and received just that 4:30 into the period. Jermain scored his second of the night, the season and his collegiate career to extend the Bobcats’ lead to 4-2.

While it appeared that Jermain, a Cos Cob, Connecticut-native, may have kicked the puck in the process, the goal was reviewed and deemed good.

“I’ve been coming here like my whole life, seen a lot of games here, so I kind of felt comfortable,” Jermain said. “Got some lucky bounces, worked hard and was lucky to get those goals.”

Almost 11 minutes later Quinnipiac scored again when Tim Clifton capitalized on the power play for his 13th goal of the season. Priskie and Rafferty had assists on the goal to give them both 22 points on the season and a tie for the team lead in points.

A late tripping penalty from sophomore Craig Martin put the Bulldogs on a late power play, but Truehl stood tall in net for the Bobcats as he did the rest of the game. Truehl made 18 saves on 20 shots en route to his 10th win of the season. 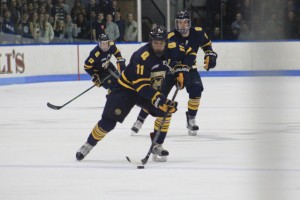 “Tonight it was good special teams, and I thought Chris [Truehl] was good for us,” Pecknold said. “Nick [Jermain] gets two goals, that line was good and everybody contributed. It was a fun win.”

Next up, the Bobcats take welcome Clarkson to High Point Solutions Arena on Feb. 10 in hopes of extending their conference winning streak to three games.