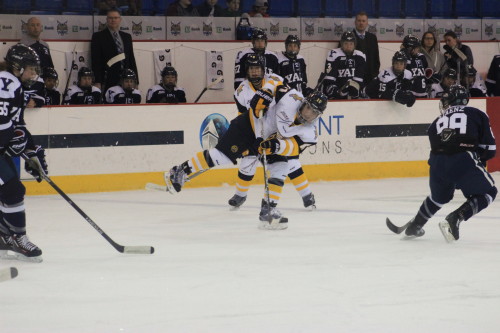 No. 10/10 Quinnipiac women’s ice hockey defeats Yale by a final score of 4-1 on Saturday at High Point Solutions Arena in Hamden. This follows the Bobcats’ 9-0 blowout over Brown on Friday night. 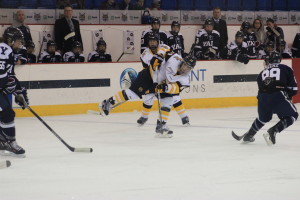 “We couldn’t be more proud of the effort our team put in this entire weekend,” Quinnipiac head coach Cassandra Turner said.

The first period of the game started off slow with constant back-and-forth play as both teams created decent scoring opportunities. Yale opened the scoring with a goal by Eden Murray, halfway through the first period.

Shortly after Melissa Samoskevich, answered back for the Bobcats, firing a shot past the Yale goalie Tera Hoffman. As both teams fought for the lead, Yale’s captain Krista Yip-Chuck went down with an injury late in the period and later on in the second period, Yale’s Kaitlin Gately became the second player of the game to go down with an injury.

The Bobcats (18-7-5, 11-5-2 ECAC) came out strong offensively in the second period. Approximately two minutes in, Kate Mackenzie fired a shot that found the top corner of the net.

Turner said that “the second goal was important” in swinging the game for the Bobcats. 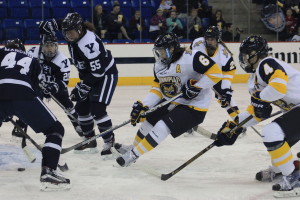 In the final period of the game, the Bobcats took control of the game. The third period helped Quinnipiac secure its lead, resulting in two Bobcat goals. Taryn Baumgardt shot one puch across Hoffman and right into the top right corner of the net, almost mirroring Mackenzie’s goal in the second period.

The Bobcats capitalized on Yale’s accumulating penalties in the third period. The Bobcats scored their fourth and final goal on a power play where Yale pulled its goalie and Emma Woods found the back of the empty net.

With two wins this weekend, the Bobcats look to take on St. Lawrence on Feb. 10 at Appleton Arena in Canton, New York.